After their first day off on Monday, the Philadelphia Eagles came out hitting on Tuesday, as it was the first practice in which they went "live," or game situation, with tackling to the ground. We have copious notes.

• The standout of the day was second-year running back Wendell Smallwood. Yesterday, in our first 53-man roster projection of camp, we noted that Smallwood could be pushed for the fourth running back spot by undrafted rookie Corey Clement.

Undrafted rookie Corey Clement has looked good at times and could push Smallwood for that fourth running back spot. I think the preseason games are likely to determine if Clement deserves a roster spot over Smallwood.

Running backs LeGarrette Blount (personal reasons) and Donnel Pumphrey (hamstring) were both out today, and Darren Sproles did not participate in the live sessions. As a result, Smallwood ran with the first team offense, and he helped himself bigly, as he rattled off several long runs during the live periods, often finishing his runs with authority.

• Corey Clement had a nice day as well. He ran through tackle attempts by Tim Jernigan, Kamu Grugier-Hill, and Najee Goode. I will note, however that Clement does not look comfortable catching the football. Over his career at Wisconsin, Clement had just 29 receptions and was often not in the game at all in third-and-long situations. He'll need to improve there if he wants a role in a west coast offense.

• While Smallwood and Clement looked legitimately good, the kind way to describe the Eagles' tackling was that they were rusty. I mean, Zach Ertz even broke a couple of tackles.

• Alshon Jeffery and Torrey Smith were both given the day off, which makes sense on a tackling day. There's no need to get those guys hurt going up against overzealous undrafted guys looking to make their marks on the team. With Jeffery and Smith out, a pair of receivers had big days. They were Marcus Johnson and Bryce Treggs.

Johnson was on the receiving end of a pair of deep balls today, both of which were dimes from Carson Wentz. On one of those connections, Johnson toasted Patrick Robinson, who quite frankly, has not looked good at all. On the other, I didn't get a great look at what coverage the Eagles were in, but Johnson was able to get behind Rodney McLeod deep down the sideline.

Treggs, meanwhile, has quietly been impressive in camp. Personally, I don't know what to make of that. I've never seen Treggs in practice prior to this season, as he was added to the 53-man roster after final cutdowns last year, nd we don't get to see the good parts of practice during the season. Is Treggs legitimately improved, or just a guy who plays well in practice but not in the games? I can't say.

Treggs' highlight of the day came on a play in which he caught a pass in traffic over the middle, spun out of one tackle, and then out of another before gaining a first down. Again, the Eagles' tackling wasn't good today, so add a grain or two of salt.

• While Terrence Brooks got trucked by Smallwood, as noted above, he had a very good day otherwise. He has nice pass breakups today against Brent Celek and Ertz. He also owned Trey Burton in one-on-one pass protection drills.

• Backup offensive tackle Dillon Gordon had a great camp last year, earning a spot as a tight end converted into a tackle, a la Jason Peters. He is having another really impressive camp this year too. Gordon had a number of battles against Derek Barnett, and won them all, from what I saw. He also was put to the test against Fletcher Cox, on one occasion in which Cox lined up at DE. Gordon neutralized him with ease after getting a strong punch into Cox's chest.

There's little question Gordon is going to wrap up a roster spot, and he may have more of a role on this year's squad, specifically as the sixth lineman on the field in jumbo sets.

• Barnett has struggled, losing the majority of his one-on-one matchups. I'm not sure quite yet what to make of that. On the one hand, I have not often seen him utilize his dip around the edge, which was his bread and butter in college, and a truly elite move for him. It appears as though he has been working on developing his other pass rush moves, like a pitcher throwing only curve balls in a spring training game. That would be rare for a rookie if that's indeed his game plan.

Still, the other moves have not been working, for the most part. I will note that Barnett did beat Isaac Seumalo on a nice swim move to the inside.

• Shelton Gibson has some more egregious drops today. So did tight end Anthony Denham. The foam yellow bat (shown below) that the Eagles use to whack the players as they're catching the football during individual drills has owned Gibson.

He must see that thing in his nightmares. 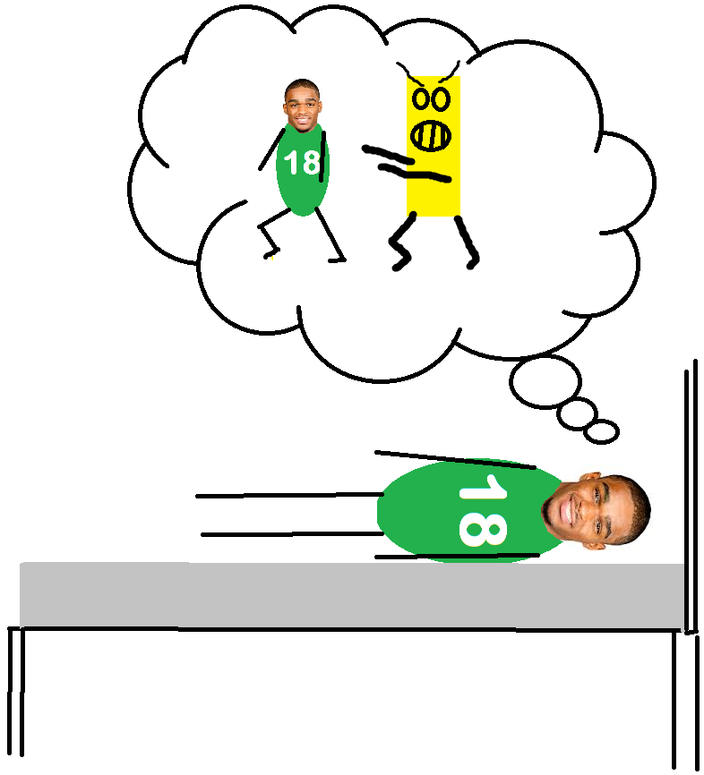 • One guy who doesn't look terrible is Taylor Hart, who converted from 3-4 defensive end to right tackle. My apologies for the back-handed compliment. I have to watch him a little more to really get a better read on if he legitimately has any shot of making the team as an offensive lineman, but he's been much better than I would have projected.

This year's Jordan Matthews is extremely lethargic, by comparison. He's simply not the same energetic practice player he once was.