Doug Pederson is fired up about Eagles RB LeGarrette Blount

Doug Pederson is a big LeGarrette Blount fan, it would seem. On Sunday, prior to the team's first open practice as Lincoln Financial Field, Pederson said that he often goes back and watches all of Blount's touchdown runs last season, presumably just for fun.

"I watched it a couple times this spring," said Pederson. "Actually went back and watched it the other day."

"I think just knowing and kind of watching him last year, what he did with New England on their Super Bowl run, just the impact that he had in the red zone," said Pederson, when asked what Blount will mean to the football team.

"He's a big, physical, downhill runner. I saw that yesterday in some of that inside-run period, the explosiveness. He's got great vision, great vision to make the jump cuts and read defensive linemen. But just that big body in the backfield I think can, for a defender, present a big problem, from a one-on-one tackling standpoint."

In my Periscope video at Sunday's practice, Blount was standing near two other Eagles running backs, Donnel Pumphrey and Darren Sproles, who are obviously two smaller backs. My apologies for the lass than crisp screenshot of that video below, as Blount, Pumphrey and Sproles are not blurry Sasquatches, but you can see the difference in size in real life here: 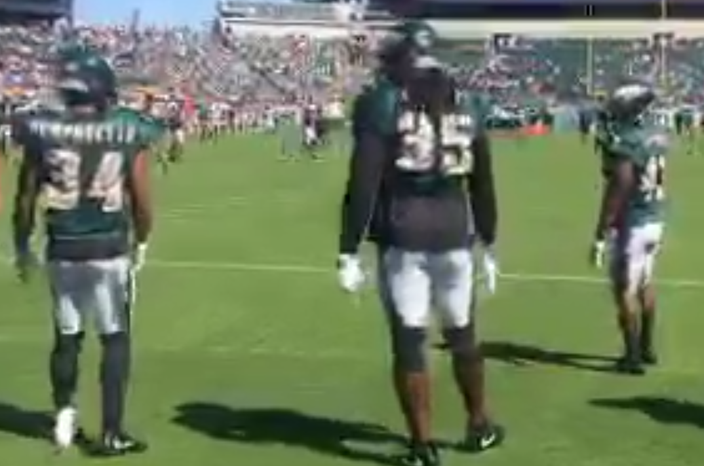 As Pederson noted, Blount has a good jump cut. In watching him so far this spring and the first few days of camp, Blount has more nimble feet than you would expect of a 250-pound man. His highlight reel tells the same story:

I know that Pederson likely has some kind of All-22 video of Blount that the team put together, but I like to envision him getting all hyped up watching his highlights with Eminem playing in the background like in the video above.