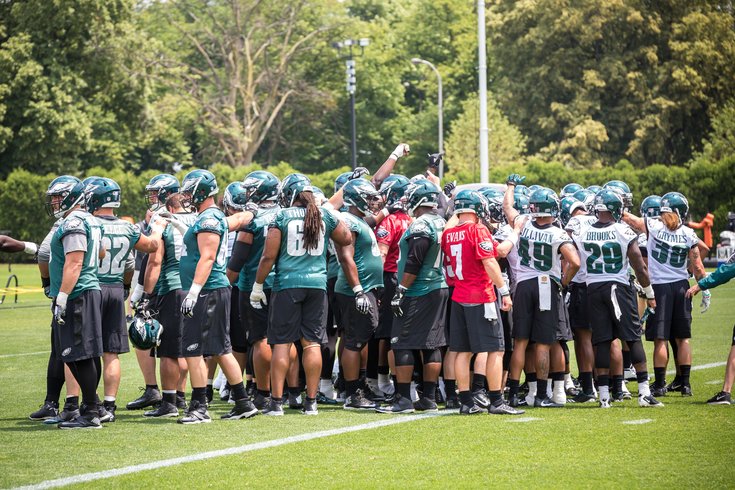 The first seven days of training camp are in the books, and after careful consideration, I'm pretty sure Carson Wentz is going to make the team. Here's who else we'll project to make the final 53-man roster, which we'll update every week.

Wentz and Foles are safe, and Matt McGloin is about what I would have expected. On Saturday, Frank Reich was asked about what factors went into whether or not the team would keep a third quarterback.

"That's going to be a tough decision because I think we have some good quarterbacks here," he said. "There are a lot of roster considerations that get played into it. It's hard to predict what those are going to be and what they look like. I've been places where you can only keep two because of roster considerations. But if everything -- in a perfect world, sometimes you can keep three. I think that is truly a day-by-day decision."

In other words, McGloin isn't exactly a lock, and I don't think he'd be a significantly better option than a guy the Eagles could sign off the street during the season if need be.

During spring practices, Pumphrey got noticeably more reps in practice than Smallwood, and that has continued into training camp. Undrafted rookie Corey Clement has looked good at times and could push Smallwood for that fourth running back spot. I think the preseason games are likely to determine if Clement deserves a roster spot over Smallwood.

The newcomer to the projected receiving corps is Marcus Johnson, who has gotten reps with the first team offense and will continue to, according to Doug Pederson.

"He's made an impact," said Pederson. "He's shown up. He's making some plays. He's one of the guys that will continue to kind of give some reps from time to time with that first group and see where he's at. He's a young, talented receiver that filled in well yesterday."

Johnson really has had a very impressive camp so far and is way ahead of fifth round draft pick Shelton Gibson.

The wildcard here is Billy Brown, who has caught the ball well in practice. That shouldn't be a surprise, as he racked up over 1500 yards and 22 TDs in his last season at Shepherd University as a wide receiver. The challenge for Brown will be whether or not he can show that he can become a competent blocker and special teams contributor. I think he's a little ways away there, but the Eagles can develop those skills over time while Brown occupies a spot on the practice squad.

Even with the trade of Allen Barbre, the Eagles have an over-abundance of depth along their offensive line, which is a great thing. It feels a lot to me like the first nine guys listed here are on solid ground. The question is whether the Eagles keep a tenth lineman. I say yes.

Center Tyler Orlosky got strong offers from several teams out west (Cowboys, Rams, Cardinals) during the undrafted free agency phase of the draft, but part of his decision to sign with the Eagles was to remain close to home. The appeal of making a 53-man roster somewhere will certainly trump the appeal of staying close home on a practice squad, so the Eagles will have to be mindful of a team looking to poach Orlosky.

Beau Allen will provide some relief when he is able to return from his pectoral injury, which will bring the defensive line count to 10. For now, we'll project nine. One name to watch is Alex McCalister. Personally, I haven't seen much from him, but it is at least somewhat interesting that McCalister was the first name mentioned by Jim Schwartz when he was asked about the team cutting Marcus Smith.

"I think the biggest thing in not working out, as far as this year, is the other acquisitions that we made, you know, and where we were," said Schwartz. "And it really sort of put us up against, ‘How are we going to get reps for all these guys?’ We do like a good, young player in the pipeline in Alex McCalister. [We] had drafted, obviously drafted Derek [Barnett], and brought in Chris [Long]. You know, so that made it difficult."

Schwartz isn't one to blow sunshine up players' butts, so if he says the team likes McCalister, then they do.

Kendricks is still just kind of hanging around. We'll see if the team is able to trade him before the start of the season. One other name to mention here is Najee Goode, who the team released last year at 53-man cutdowns and then re-signed him after Week 1 so his contract wasn't guaranteed. We'll project that fate for Najee once again.

We'll leave Patrick Robinson here for now, but he has really struggled so far and is not a lock to make the roster.

As we all know, this corner group is highly alarming. The Eagles could look outside the organization and make a move to replace Robinson.

Brooks has looked good in the spring. He could unseat Jaylen Watkins as the third safety. To note, Watkins is my 54th guy, so if the team traded Mychal Kendricks, for example, or if someone gets hurt, Watkins would make my 53-man roster projection.