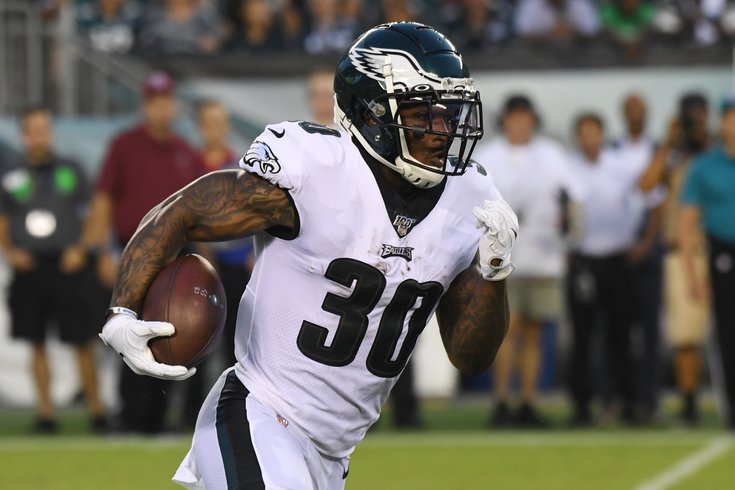 Corey Clement left no doubt that he'll be on the roster in 2019.

The Philadelphia Eagles' second preseason game is now in the books, so let's go ahead and project what the 53-man roster will look like after final cuts, shall we?

McCown solidified himself as the clear No. 2 after his performance against the Ravens.

The Eagles simply don't have enough room on the roster to go the unconventional route of keeping four quarterbacks, and so they'll have to hope that Clayton Thorson passes through waivers and can be added to the practice squad. (I believe he will.)

Corey Clement left little doubt that he will be back on the team this year after he looked fully healed from injury against Baltimore.

As for Wendell Smallwood, is this finally the year the team parts ways? If they believe they can get guys like Josh Adams or Boston Scott on the practice squad, it'll be hard to justify Smallwood's roster spot.

If the Eagles keep five receivers, it will be the above group. While they have had good camps, Greg Ward and Marken Michel haven't done enough to either unseat Hollins or convince the team to keep six receivers.

If Michel were a rookie, I think he'd have a decent chance of sticking, but he was a UDFA in 2016 who is now 26 years old.

Richard Rodgers' most recent foot injury makes the No. 3 tight end spot a difficult one to figure out. The Eagles say he's out "multiple weeks," which in training camp parlance means "a long time." In order for Rodgers to go on IR with the possibility of returning to the roster, has to make the official 53-man roster, and the team could IR him on the Tuesday before Week 1. If they IR him before 53-man cutdowns, he's automatically done for the season.

A season ago, they opted for the former, and Rodgers did indeed eventually get reactivated from IR. Without knowing the exact severity of his injury, it's tough to predict, but I have a feeling that as long as they think he can return, they are going to do exactly what they did a year ago, right or wrong.

In the meantime, Perkins will make the team again as a result of Rodgers' injury, like he did a year ago. I would say that the Eagles will likely look to add a tight end on the waiver wire, but having made the playoffs last year, it's likely that anyone worth claiming will already be gone, given the Eagles' low priority in the waiver order.

Like last week, we have Stefen Wisniewski missing the cut.

While I don't think that Pryor's roster spot is 100 percent safe because he's not ready to play yet, it helps him that Jeff Stoutland is training him currently at four different positions, an indication that the team still believes that he can be a versatile reserve lineman for them in the future.

Hall is making the team, and he may have even leap-frogged Sweat for the No. 4 DE spot.

Rookie fourth-round pick Shareef Miller hasn't shown enough to inspire confidence he can help much this year, so the team is likely to approach him about taking a redshirt season.

This is another tricky one to figure out. Grugier-Hill is highly likely to miss a few games to start the season, while Bradham continues to rehab a toe injury. If the Eagles know Bradham will be ready, then they can probably get away with only having five linebackers (four with Kamu out) to start the season. If Bradham isn't ready, they probably can't head into the season with only three healthy linebackers.

One player who seems to have gotten better as the preseason has progressed is Edwards, who, oh by the way, is a natural MIKE linebacker, something the Eagles don't really have otherwise.

If the Eagles release Scandrick at 53-man cutdowns and then sign him back to the team after Week 1, there are two benefits:

The Eagles signed Scandrick on July 27, so it's not as if teams were beating down his door to add him. They should be able to convince him to rejoin the team after Week 1.

Jalen Mills will almost certainly stay on the PUP list to start the season.

The Eagles could keep a fifth safety, which would likely be Tre Sullivan if they did, however, I don't think they'd fear losing him on waivers, and he still has practice squad eligibility. If I'm the Eagles, I'd rather keep a guy like T.J. Edwards than Sullivan.

None of the specialists have any competition.