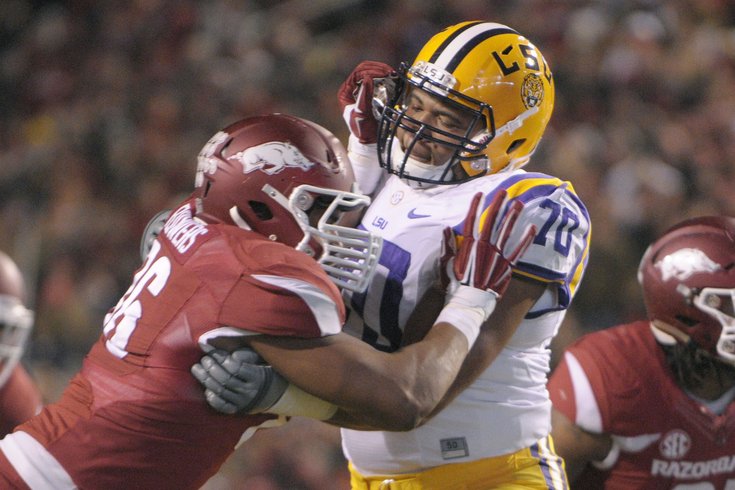 The Eagles lack a masher on their interior OL.

As we noted last month, if the Eagles bring in a prospect for a pre-draft visit, their chances of being drafted by Chip Kelly go up drastically. Six of the seven Eagles draft picks a year ago were among the Eagles' 30 allotted pre-draft visits, which means that it is absolutely worthwhile paying attention to who stops by the NovaCare Complex this time of year.

There have been 22 reported visits (and soon to be visits) so far. You can click on each name for detailed analysis and how they might fit with the Eagles:

H/t to BleedingGreenNation.com for finding many of the above visits reported on Twitter.

According to Collins himself at the Combine, a lot of teams told him that he is their favorite offensive lineman in this draft, according to Tony Drovetto of Seahawks.com. If that is true, then logic would suggest that Collins will not be available when the Eagles are picking at 20.

Collins is the least thought of Collins of the Collins trio (Landon, Jalen, La'El), but he may very well be the most likely to be picked by the Eagles at 20, if that is where they stay. The overwhelming consensus on Collins is that he is a mean and nasty run blocker who could come in on day one and be productive in a run-heavy offense (cough, Eagles, cough). However, most feel that he does not have the athleticism to be a left tackle in the NFL, so he'll have to move either inside or over to right tackle. For the Eagles' purposes, they don't a left tackle anyway, seeing as they have Jason Peters in the short term, and a capable left tackle currently playing right tackle in Lane Johnson.

Here are some draft guys talking about Collins at the Combine:

The Eagles currently have very athletic interior offensive linemen who do a great job sealing off holes with technique, getting to the second level, and getting out into open space out in front of receivers and backs in the screen game. What the Eagles don't have is a guy who can physically move defensive linemen against their own will. Collins can be that type of guy.

Poutasi is big-bodied tackle who will likely move to guard at the next level. That's a theme in this draft with a lot of the offensive tackles, by the way, which is good for the Eagles, as it fits their needs. Poutasi's pass protection skills are a big concern. Note this blurb about Poutasi on NFL.com, which is actually listed under his strengths:

STRENGTHS Improved from 27 quarterback hits/sacks allowed in 2013 to just 9.5 in 2014. Footwork and poise in pass protection improved as season progressed. Works to stay square in his pass sets for as long as he can. Beefy frame that takes up space. Flashes power when he's allowed to fire out. Uses wide base, choppy feet and good body control for his climb to second level. Decent feet for a man his size and is able to slide laterally to block on an angle. Has enough upper body strength to eventually anchor up even when he gets upright.

It's great that he improved and all from 2013 to 2014, but 27 sacks/hits allowed in 2013? Gross. Poutasi feels like a massive bodied developmental player that OL coach Jeff Stoutland can try to patiently bring along, like the Eagles tried to do with 340 lb. Michael Bamiro a couple years back.

Like Poutasi, Smith is a big-bodied OT who will likely move inside to guard at the next level. However, unlikely Poutasi, Smith has some intriguing athleticism.

If you'll note, Smith is obviously huge, at 6'6, 338 with long arms and big hands, but look at the broad jump, vertical jump, and 40 yard dash comps in the spider chart below. He has some explosion.

As an added bonus, Smith earned his degree a year early, and Chip loves him some college graduates.

Whenever Alabama's Landon Collins' name comes up in a mock draft to the Eagles, Philly reporters are quick to shoot it down, as Collins isn't a great fit for Bill Davis' scheme. The Eagles seem to target versatile safeties, valuing cover skills over in-the-box skills. Does Amos' scouting report strengths on NFL.com sound like a fit?

STRENGTHS Athletic with good range. Fluid in space with easy backpedal and smooth hips. Has ability to turn, run and recover when ball is in the air. Good route recognition. Trustworthy in coverage and is rarely out of position. Can line up defense. Offered versatility in coverage. Played some slot corner in sub packages. Outstanding in zone coverage at Penn State. Can crowd receivers and closes throwing windows. Allowed just 3.9 yards per target in 2014. Has twitch to trigger and close on throws.

The downside is that Amos isn't noted for his in-the-box prowess, but I'm not sure the Eagles care all that much.

Projected Round: 4, but teams will be reaching for safeties