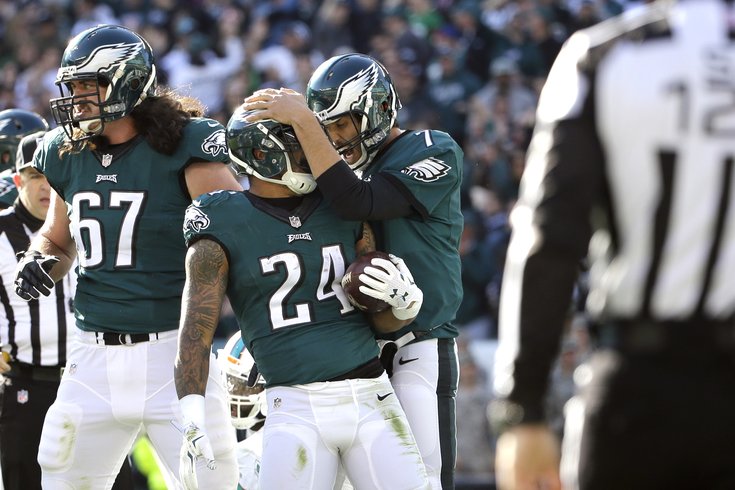 The Eagles' injury report lists nine names this week, but all of them are expected to play Sunday against the Bills. All nine are listed as "probable." Here's a look at the Eagles' and Bills' injuries, with analysis.

• Jordan Matthews (late addition - back): Matthews is easily the Eagles' best weapon in the passing game. Here are the Eagles' receivers' numbers this season:

As the chart above shows, if Jordan Matthews can't go, the Eagles' leading WR otherwise is Riley Cooper, with 277 receiving yards. Gross.

• RB Ryan Mathews (concussion, groin): A week ago, DeMarco Murray played just 14 snaps, and drama ensued. This week Mathews, who has easily been the Eagles' most effective "traditional" running back this season, will likely return to the lineup. It will be interesting to see how the snaps are divvied up this weekend.

• RB Kenjon Barner (ankle): It will also be interesting to see if Barner goes back to the inactive list, after playing meaningful snaps a week ago against the Pats.

• TE Zach Ertz (hip): Ertz had his first TD reception of the season a week ago, after having several called back earlier this season.

• OT Lane Johnson (shoulder): Johnson will have a difficult matchup this week against Mario Williams, as we noted in our five matchups to watch on Thursday.

• NT Bennie Logan (knee): A late addition to the injury report a week ago, Logan appears on it again, this time as probable. Last week he was listed as questionable.

• DE Cedric Thornton (ankle): The Eagles were without Thornton a week ago, but were effective against the Pats' rushing attack anyway. Thornton's likely return comes against a Bills team that loves to pound the run.

• CB Eric Rowe (ankle): Getting his first ever NFL start last week against none other than Tom Brady, Rowe had a terrific showing. He'll need to build on that this week, as he'll have a tough assignment against Sammy Watkins, again, as noted in our five matchups to watch.

• S Walter Thurmond (elbow, shoulder): Thurmond, who came to the Eagles with a history of injuries, has been able to stay healthy this season.

Gilmore's absence is the biggest news from the Bills' perspective. He starts at one corner spot for Buffalo.