Eagles could potentially play a game in Mexico City in 2020 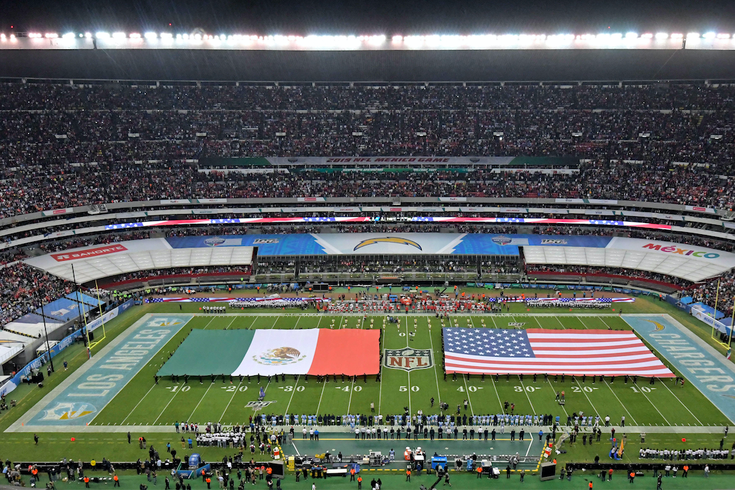 The NFL announced that the Arizona Cardinals will play a "home" game in Mexico City during the 2020 season. The Eagles, who have a road game against the Cardinals, could be selected to travel for the game.

The Philadelphia Eagles have a 12.5% chance of traveling to Mexico City next season to face the Arizona Cardinals in a neutral site international game.

The NFL announced Friday that the Cardinals will play one of their home games at Estadio Azteca in Mexico's capital city, ESPN reported.

"We are thrilled to learn that this game will take place at Estadio Azteca where we received such an enthusiastic reception in 2005," Cardinals chairman and president Michael Bidwill said in a release. "We are extremely grateful for the support we receive from fans in Mexico and look forward to an incredible experience."

Philadelphia has a road game against the Cardinals on their 2020 schedule, meaning they are one of eight teams who could potentially be chosen to make the trip. Dates and times for opponents have not yet been set. The official schedule is typically released in April.

Eagles owner Jeffrey Lurie has been a strong advocate for the league expanding its international reach. In an interview with NFL.com prior to the London game, Lurie said he'd like to see NFL continue to seek opportunities in other markets.

"We know we've got the most popular sport in America," Lurie said. "Let's share it with the rest of the world. The more we can share it, the more people will become avid fans."

The Cardinals previously played the San Francisco 49ers in Mexico City in 2005, and the Kansas City Chiefs faced the Los Angeles Chargers there last season.

The Eagles' chances are fairly slim, as the Cardinals play several teams situated out west — including the Dallas Cowboys — who might make more sense logistically for the schedule makers.  Eagles fans will find out in the next two months whether a trip to Mexico City might make a good vacation this fall.