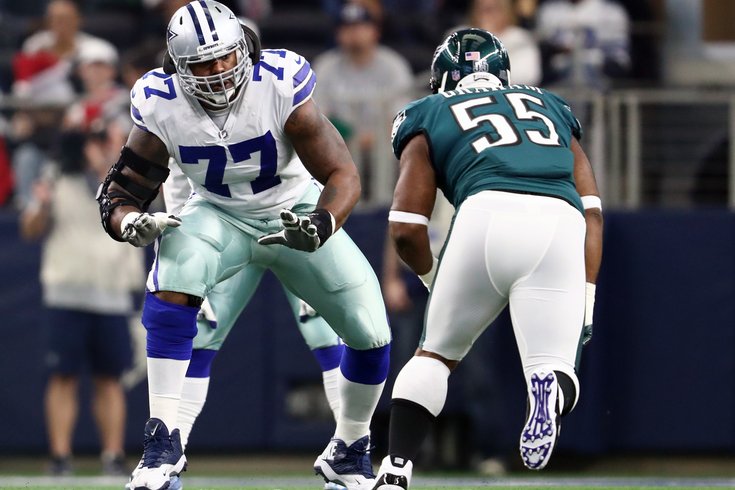 The bet here is that Tyron Smith will play this Sunday against the Eagles.

When the Philadelphia Eagles take on the Dallas Cowboys on Sunday Night Football, they'll be without a number of their key players, as usual. The Dallas Cowboys, on the other hand, are banged up as well, but some of their guys are a little closer to playing than not. We'll have to wait until closer to game time to find out how deep they'll have to dive into their depth.

Coming off of three losses and facing their most formidable rival in the division, the Cowboys are going to shoot up any and all players who have any chance at all of playing.

Update: All of the Cowboys' best players listed as "questionable" are going to play, according to Adam Schefter of ESPN.

The Eagles' offense has been slow in Jackson's absence, and often frustrating for its lack of big-play ability from the remaining receivers.

• LT Jason Peters (knee): Peters is "week-to-week" with a knee injury. Rookie first-round pick Andre Dillard will fill in, and see a lot of Cowboys DE Robert Quinn, as we noted in our five matchups to watch.

• LB Nigel Bradham (ankle): With the Eagles cutting Zach Brown this week, the likely starting LBs will be Kamu Grugier-Hill and Nate Gerry, with undrafted rookie T.J. Edwards mixing in. Bradham's absence in this matchup is more meaningful, with Ezekiel Elliott running the ball.

• DT Timmy Jernigan (foot): Jernigan became a starter when Malik Jackson was likely lost for the season with a Lisfranc injury Week 1. Jernigan is expected to be out for a while, possibly into November.

• RB Darren Sproles (quad): Sproles is week to week with a quad injury. This is the third straight season that he is going to miss a substantial amount of time. While Sproles has had an outstanding career, but he is now 36 and it really made little sense to bring him back this season.

• CB Ronald Darby (hamstring): Darby struggled early in the season while trying to come back from a torn ACL. He appears poised to return after missing 3 games.

• DT Malik Jackson (IR): Originally, the loss of Jackson hurt most when the Eagles forced obvious passing downs, as the Eagles don't have a clear replacement for him in those second-and third-and-long situations. In the base defense, however, Jernigan was a capable replacement who played well Week 1, after missing almost the entirety of the 2018 season with a mysterious back injury. With Jernigan now out as well, the Eagles are digging deep into their DT depth, and they'll need guys like Hassan Ridgeway and Akeem Spence to step up.

• CB Jalen Mills (PUP): Mills has begun practicing, and may actually start in this game, but has still not been activated to the 53-man roster and is still on PUP.

• RB Corey Clement (IR): Clement worked his way back from a knee injury only to suffer a shoulder injury Week 2 against the Falcons that wasn't getting better.

• CB Cre'Von LeBlanc (IR): LeBlanc is out with a Lisfranc injury. He'll be allowed to practice after Week 6 of the regular season, and can return to the active roster after Week 8.

• LT Tyron Smith (ankle): Late in the fourth quarter in the Cowboys' loss in New Orleans, Saints DT David Onyemata sacked Dak Prescott, who fell into Smith's lower right leg. Smith hobbled off the field with help from medical staff, did not return, and reportedly needed a cart at some point. He was diagnosed with a high ankle sprain, and he has missed each of the last two games, losses to the Packers and Jets.

Smith did not practice at all during the week leading up to the Jets game, and was listed as "questionable," even though there wasn't much of a chance of him playing. He was limited in practice this week.

There's no way he's 100 percent this soon after suffering a high ankle sprain, but the bet here is that he'll go. If he doesn't, the first guy off the bench at OT is Cameron Fleming.

• RT La'el Collins (knee): Like Smith, Collins did not practice at all last week, was listed as "questionable," and did not play. He exited the game during the Cowboys' loss to the Packers Week 5. Again, the bet here is that he'll play. If both Smith and Collins are out, Collins' backup is undrafted rookie Brandon Knight. If only Collins is out but Smith plays, Fleming would probably start at RT.

• RG Zack Martin (back, ankle): All-Pro starting RG. Martin has had a bad back all season. Add an ankle injury to that. It would be a big surprise if Martin didn't play.

• WR Amari Cooper (ankle, quad): Cooper bruised his already banged-up thigh early in the Cowboys' loss to the Jets on Sunday. Heading into that game, he was on a pace this season for 102 catches for 1,638 yards and 16 TDs.

In the two matchups against Philly last season, Cooper had 16 catches for 292 yards and 3 TDs. Obviously, if Cooper can't go, that would be a major loss for the Cowboys, as the Eagles' secondary has gotten torched all season long by wide receivers with the ability to make plays down the field.

Again, the bet here is that he will play.

• CB Byron Jones (hamstring): Jones injured his hamstring against the Jets. He is a big, athletic corner who is well-regarded around the league, despite a lack of big-play production.

• WR Randall Cobb (back): Starting slot receiver. 17 catches for 210 yards and 1 TD. He's not the playmaker you remember from his days in Green Bay, but he's still an effective 5th option.

• DL Tyrone Crawford (IR): Crawford was a starter who played both DE and DT in the Cowboys' scheme. He had a sack in each game against the Eagles in 2018. Crawford's season is over, as he'll have hip surgery.

• S Kavon Frazier (IR): A pectoral injury suffered in the Saints game ended his season. He appeared in all 16 games in 2018, and all 4 for which he was healthy in 2019. Good special teams player.