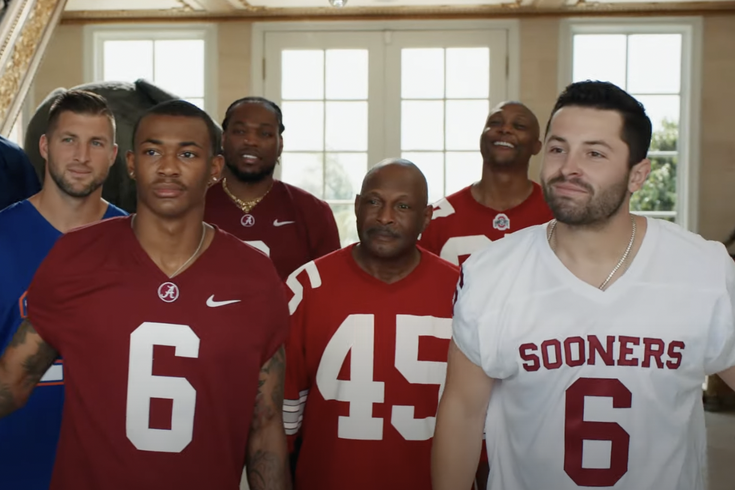 Philadelphia Eagles wide receiver DeVonta Smith is flanked by past Heisman Trophy winners in a new Nissan commercial. The former University of Alabama star was selected with the 10th overall pick in the 2021 NFL Draft.

Eagles rookie wide receiver DeVonta Smith was a legitimate phenom in college, one of the most dangerous playmakers on a championship offense at the University of Alabama, and he rightfully became a rare wide receiver to earn a Heisman Trophy on his way to the NFL.

That the Eagles drafted Smith — and the way they drafted him — immediately upped the interest in the team's 2021-22 season. It was already intriguing to consider what the Eagles would look like in a rebuild with Jalen Hurts at quarterback and a new head coach, but adding a player of Smith's caliber to the team will make every offensive possession that much more compelling.

The tradition of welcoming a new Heisman Trophy winner into the NFL has been marked in recent years by a commercial series in which past winners all live under one roof together, following strange rituals that somehow explain their greatness.

Smith, who comes across as a man of few words, is hard to project as a sports and entertainment star. But in a way, his real character lends itself to an understated type of comedy.

The rookie has now made his debut in two "Heisman House" commercials from Nissan, in which he joins the likes of Eddie George, Baker Mayfield, Kyler Murray, Tim Tebow, Derrick Henry, Bo Jackson, Archie Griffin and Desmond Howard, who was the last wide receiver to receive the honor in 1991.

In the first commercial, Smith is introduced to the chores and routines of life in the Heisman House. Browns quarterback Baker Mayfield tricks him into buying 40 Nissan Pathfinders, which Smith could actually afford with his rookie contract, but still (let's sound like his parents now) what if Mayfield told him to jump off a bridge?

In the second commercial, Eddie George takes Smith for a ride with Alabama mascot Big Al, an elephant who relentlessly shakes his pom-poms.

It could have been worse.

Did you know that before Big Al, The University of Alabama's mascot was a real live elephant?

Learn about "The Many Faces of Big Al": https://t.co/qZUbOwidks pic.twitter.com/wqznSD88zB

Smith enters his rookie year penciled in as the Eagles' ostensible No. 1 wide receiver, which is a lot of responsibility and pressure for a young player to carry. If he makes a strong impression and vindicates his Heisman selection at the pro level, we can probably expect to see Smith in more commercials moving forward.

Not counting Mike Vick and Darren Sproles getting spots with Cure Auto Insurance and their audacious Birds-themed commercials, it has been a while since the Eagles had a player of this magnitude for big advertisers. The Sixers have had Joel Embiid become a familiar face in Hulu ads, but you'd have to go back to Donovan McNabb and Campbell's Chunky Soup for the Eagles. It will be interesting to see if and where Smith might be slotted to represent a brand at some point down the line.