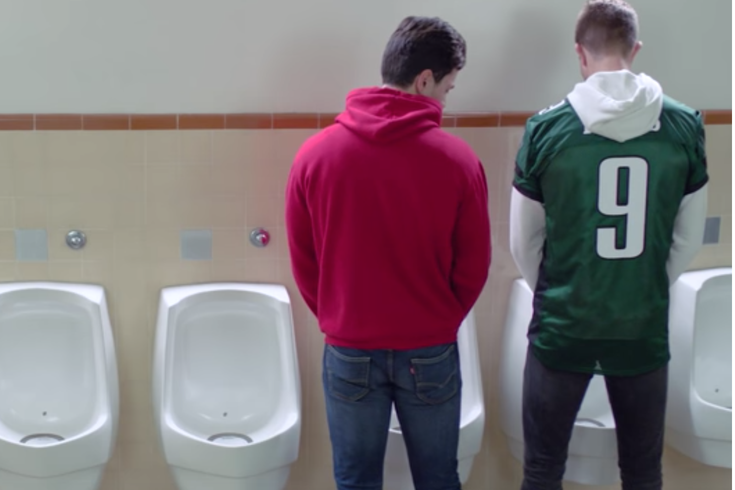 The commercial in question, in all its glory.

CURE Auto Insurance is based in Princeton, New Jersey, but the company has made clear where its football allegiance lies. CURE’s newest commercial, though, takes its boundary-pushing to a whole new level.

The commercial features a familiar No. 9 green football jersey, a row of urinals, and a thinly-veiled allusion to former Eagles quarterback Nick Foles and his particularly popular nickname:

If you need more background on the Big D*** Nick nickname, here’s plenty.

Incredibly, this is real. The company uploaded the commercial to its official YouTube page, and shared it on its official Twitter page:

Look for it on CBS during March Madness season!https://t.co/zT3lfh5mrT

CURE launched a similar PR stunt when the Eagles reached the Super Bowl in 2018 with a shot at Patriots quarterback Tom Brady and the New England franchise’s Deflategate saga.

Lane Johnson, one of the biggest champions of Foles’ growing nickname, tweeted out his approval on Friday:

Unsurprisingly, plenty of people had some social media takes:

Saw this commercial and was thinking wtf the whole time, cant believe they went there......well done

The best part about this is Wentz, lane, Kelce and Brooks are literary hanging out laughing about this together

And here’s a tweet from 2013, from one user asking when Nick Foles would get his own CURE commercial during his first go-round with the Eagles:

When will nick foles be the new face of cure auto insurance?

Well, Eric, we have some news from the future, and it’s probably going to surprise you.