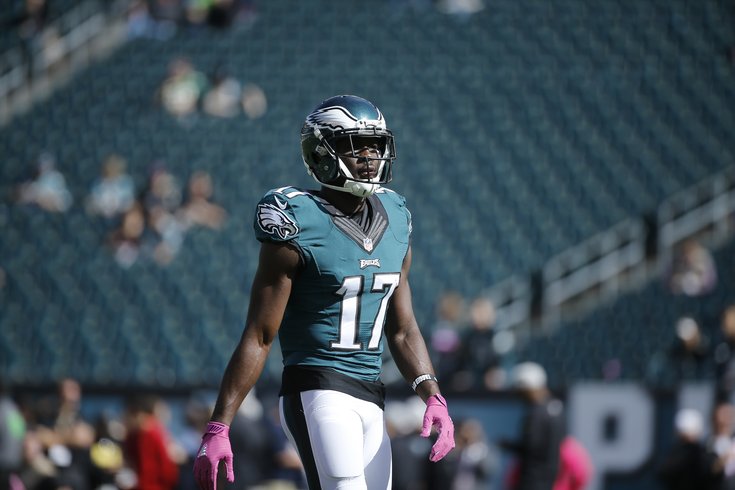 Nelson Agholor is likely to make his return to the field this Sunday.

The Eagles' injury report lists 11 names this week, but eight of them are "probable," so the Eagles come into their matchup with the Dolphins relatively healthy. The biggest name to watch as we get closer to game day remains Jason Peters, who was officially listed as questionable. Here's a look at the Eagles' and Dolphins' injuries, with analysis.

• OG Josh Andrews (concussion): When asked why the Eagles signed Julian Vandervelde this week, Chip Kelly said, "Josh Andrews is out this week, so we needed a backup center." Poor Julian. Whenever Andrews gets healthy again, the Eagles will likely cut Vandervelde, which will be his 20th roster transactions with the Eagles.

• S Jerome Couplin (shoulder): The Eagles have a number of banged up safeties. Couplin is just a backup and special teams player, but his inclusion on the injury report is relevant because Malcolm Jenkins isn't 100 percent.

• OT Jason Peters (back): Peters left the Eagles-Panthers game on a cart after suffering what looked like a potential devastating injury, such as a torn ACL, or ruptured Achilles, but it turned out to just be back spasms. A couple weeks ago, we spoke with a doctor who explained the healing process with back spasms. Peters was originally listed as questionable last week, before the Eagles officially ruled him out on Saturday. This week he's once again initially listed as questionable, however, the Eagles have to feel more confident about their offensive tackles after getting solid performances from Lane Johnson and Dennis Kelly a week ago.

• RB Ryan Mathews (groin): Ryan Mathews' nagging injuries haven't stopped him from being productive whenever he has gotten opportunities. On the season, Mathews is running for 6.1 yards per carry.

• S Malcolm Jenkins (concussion): Jenkins reportedly played more than a half of football last week with a concussion, however, he is expected to be ready to go Sunday.

• WR Nelson Agholor (ankle): The Eagles need Agholor, as they are short on depth and Josh Huff has been a disappointment as a receiver early this season. Agholor is likely to play this week.

• ILB DeMeco Ryans (hamstring): In previous weeks, Ryans' absence wasn't a big deal, as the Eagles were loaded with depth and talent at ILB. However, his importance is amplified with the loss of Jordan Hicks for the season.

• ILB Kiko Alonso (knee): Alonso participated in his first game last week after injuring his knee Week 2. His snaps will increase this week, again, with Jordan Hicks done for the season.

• WR Riley Cooper (toe): Cooper hasn't had a reception since the Giants game.

• TE Trey Burton (hamstring): Quality special teamer on a team loaded with them.