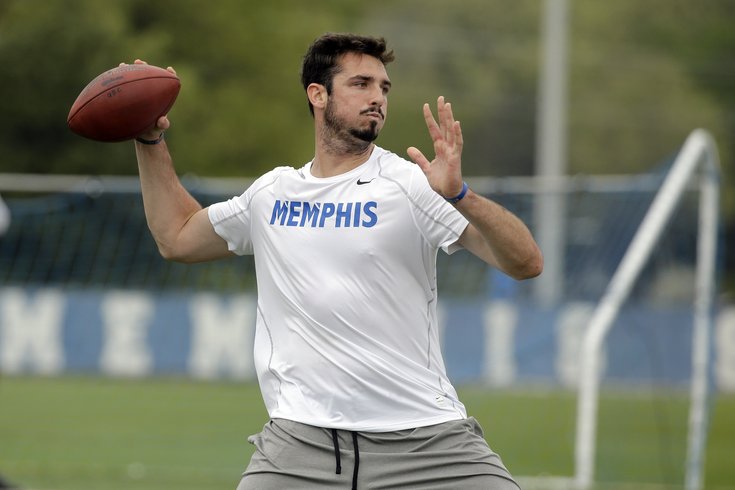 As we've noted all offseason long, the Philadelphia Eagles are going to take a quarterback in the 2016 NFL Draft. It's only a matter of who and in what round.

Multiple reports have said that the Eagles tried to move up to the No. 1 overall pick, but were outbid by the Los Angeles Rams. The target was almost certainly either North Dakota State's Carson Wentz or Cal's Jared Goff. Clearly, the Eagles are aggressive hunters for a long-term solution at quarterback.

The Rams have decided to be coy about which quarterback they are planning on drafting. Some reports have said it will be Wentz. Others insist it will be Goff.

The Eagles could still be in the mix for Wentz or Goff, but that would of course require cooperation from the Cleveland Browns, who are sitting in the No. 2 overall spot. The Eagles could still opt to try to trade up with Cleveland, or hope the Browns pass on the leftover quarterback and patiently wait for that player to fall to a less costly trade-up spot.

Another option could be to simply draft Memphis' Paxton Lynch with the eighth overall pick, assuming three quarterbacks aren't taken in the top 7, or they could draft a quarterback in a later round.

Here are five quarterbacks who could make the most sense for the Eagles:

There's isn't much to dislike about Wentz's game. He's big and sturdy, he has a great arm, a quick release, he's surprisingly athletic, and very smart. Even if you dock him for playing at a lower level in college, Wentz operated in an offense that had pro-style concepts, prompting some to believe he's more pro-ready than other quarterbacks who played in more remedial offenses at a more competitive college level. A bigger concern on the "pro ready" front would be that Wentz only had 612 pass attempts in college.

The presence of Sam Bradford and Chase Daniel would allow Wentz to make the jump to the NFL without immediately being thrown to the wolves. He would also be tutored by a quarterback-focused coaching staff that includes Doug Pederson, Frank Reich and John DeFilippo, as well as Daniel, who has previously played a helpful sidekick role to Drew Brees and Alex Smith.

Would Wentz help the 2016 Eagles? Probably not, but who cares? Forget 2016. Go get the guy who can be your answer at the most important position in sports for the next decade.

Draft projection: Potential No. 1 overall pick. If not, likely top 5.

Personally, I like Wentz more than Goff, although Goff has certain traits that are better. He has outstanding pocket presence, a very accurate arm, and more experience (he attempted 500+ passes each of the last three years), but lacks what Wentz has in terms of arm strength and mobility.

The Eagles have drafted in the top 10 three times in the last 20 years. In other words, you don't get many opportunities to draft top 10 type of prospects at the quarterback position very often, and I believe that's what Goff and Wentz are.

Draft projection: Potential No. 1 overall pick. If not, likely top 5.

Lynch is a physical specimen who checks off all kinds of boxes in terms of what NFL teams are looking for in a quarterback. He has great size, a strong arm, touch, and good mobility for his size. The big knock on Lynch is his ability to hang in the pocket and deliver throws to his second or third progressions, or when he faces pressure. He also played in unsophisticated offenses both in high school and college, and wasn't often asked to take snaps from under center.

Some feel that Lynch has as many as two years to go before he'll be ready. That's fine from the Eagles' perspective, who have the luxury of being able to be patient with a young quarterback. However, if indeed Lynch is that far behind, a team like the Eagles could be hesitant to take that kind of project with the eighth overall pick.

Then again, it's not often you're drafting in the top 8, and if you don't have a long-term answer at quarterback, your chances of competing for a Super Bowl drop considerably.

Hackenberg has a good arm and pro traits that you want from your quarterback. However, his production and game tape over the last two years have been really ugly. Some blame head coach James Franklin for running an ineffective vanilla offense. Others have put the blame on Penn State's porous offensive line. Those are valid points to some degree, but they should not excuse Hackenberg's negative attributes, such as his awful footwork.

If the Eagles were to draft Hackenberg, it would be on pure projection. However, as noted above, he would also be tutored by a quarterback-focused coaching staff. If there were one team who might think, "We can fix him," it could be the Eagles.

Of the remaining two quarterbacks the Eagles took a private look at during the pre-draft process between Prescott and Stanford's Kevin Hogan, Prescott makes more sense to me. The great Sam Lynch, formerly of IgglesBlog fame, made the point that if the Eagles are going to draft a quarterback anywhere other than the first round, that quarterback should be a project with higher upside. That's Prescott, who has better physical attributes like running ability and a strong arm. Hogan is a more polished quarterback, but his arm strength is likely going to make him little more than a reliable backup.

Drafting quarterbacks who project as backups isn't the worst idea. However, in this case it would be for the Eagles, who already have a backup in Chase Daniel signed to a three-year contract.