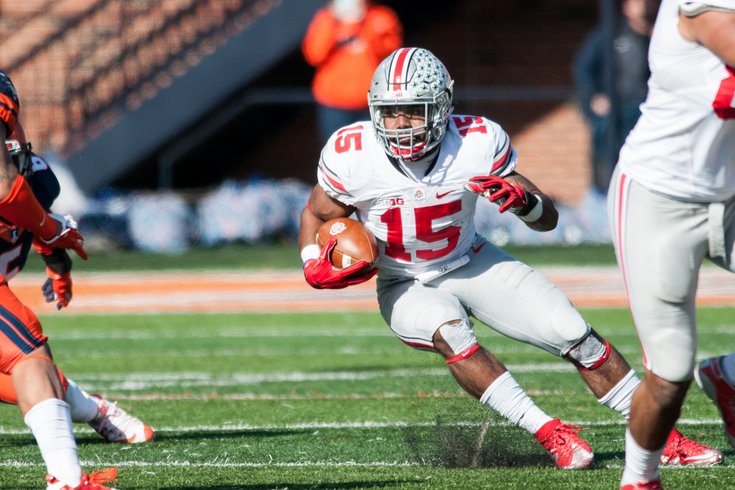 Ezekiel, Elliott, and Eagles all begin with the letter "e." #Analysis.

One of the most hotly debated and polarizing players among Eagles fans in the 2016 NFL Draft has been Ohio State running back Ezekiel Elliott. According to Elliott himself (via James Walker of ESPN), the Eagles are the team that has shown him the most interest in him:

Elliott has a chance to be a special talent. However, when you factor in the value of his position, drafting Elliott at pick No. 8 just isn't worth it to some (self included). Working against Elliott is that running backs have extremely short shelf lives in the NFL and that they are not safe picks (in terms of bust probability) any more than most positions.

More specific to drafting a running back 2016, Elliott is the only sure-fire first round pick. In 2017, there is an absurd number of really good running backs who will be eligible to enter the NFL Draft, such as LSU's Leonard Fournette, FSU's Dalvin Cook, Stanford's Christian McCaffrey, Oregon's Royce Freeman, Georgia's Nick Chubb, and the list goes on and on. Is is better value to draft Elliott with the eighth overall pick, or get one of those other very talented backs a year from now at a much more palatable spot in the draft?

That's what the Eagles may have to decide.

Interestingly, a report emerged from Tony Pauline of draftinsider.net (h/t BGN) that if the Eagles were to draft Elliott, a pair of teams could be interested in Eagles running back Ryan Mathews.

I'm told if the Philadelphia Eagles select running back Ezekiel Elliott with the draft's eighth pick, the Dallas Cowboys and San Francisco 49ers are two teams interested in Ryan Mathews, the Eagles' present starter. Insiders I spoke with think its unlikely Mathews is dealt to a divisional rival such as Dallas and question if they would trade him to a team now led by their former head coach.

To some degree, not wanting to deal Mathews to Dallas would make some sense, but eschewing the opportunity to improve your team by not dealing him to San Francisco out of spite seems ridiculous.

13 days. We'll get there soon enough.