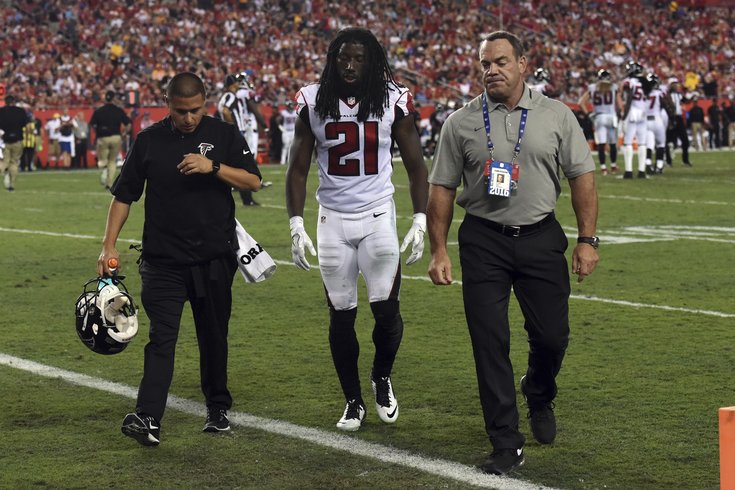 On Sunday, the Falcons will be without their best defensive back, Desmond Trufant.

For the second straight week, the Philadelphia Eagles will be down a pair of offensive line starters, in Lane Johnson (suspension) and Allen Barbre (hamstring). The Atlanta Falcons will be missing a few key players as well.

Here is the Friday injury report:

• OG Allen Barbre: For the second straight week, Stefen Wisniewski will start in Barbre's place at LG, and will also serve as the primary backup center to Jason Kelce. The next man up at either guard spot would be Isaac Seumalo, with Matt Tobin being the primary backup both at LT and RT.

• S Terrence Brooks: Special teamer only so far this season.

• LB Kamu Grugier-Hill: The Eagles acquired Grugier-Hill off of waivers after 53-man cutdowns to contribute on special teams.

• TE Brent Celek: Over his 10-year career, Celek has played 157 games and missed just one. The only reason he missed that one was because he could not be cleared for a concussion in time before a Thursday night game. Otherwise he likely would have played. You can bet he'll be a go on Sunday.

• DT Bennie Logan: Logan's absence hurt the Eagles' run defense against the best rushing offense in the NFL two weeks ago. Last week his absence was of lesser importance against a bad Giants rushing attack. This week, the Eagles need all hands on deck against the explosive Falcons offense.

• CB Leodis McKelvin: McKelvin said he wasn't 100 percent in the Eagles' game against the Giants last week, and he didn't play like it either.

• DT Taylor Hart: Hart was signed a few weeks ago in anticipation of Logan being out, but he has not yet been available for any game yet.

• CB Ron Brooks (IR): As a player, Brooks isn't exactly a world-beater, as he doesn't have a single interception, sack, or forced fumble over his five-year NFL career, however, his loss will further deplete an already thin group at cornerback. In Brooks' absence, Malcolm Jenkins has dropped down into the slot in nickel packages, with Jaylen Watkins coming off the bench to play safety.

• CB Desmond Trufant: Trufant is the Falcons' best defensive back. On the season, he has 31 tackles, one interception, two forced fumbles, and two sacks.

• TE Jacob Tamme: Tamme has 22 receptions for 210 yards and 3 TDs. The Falcons love running three-tight end packages, so Tamme's absence will either hamper their effectiveness in those sets or cause the Falcons to abandon them completely.

We'll update the rest of the Falcons' injuries when they are made available, although no updates are anticipated.

• LB Sean Weatherspoon: Weatherspoon played in four games (starting two) before rupturing his Achilles Week 4 against the Panthers. He had 27 tackles.