Eagles fans face delays in getting home on SEPTA 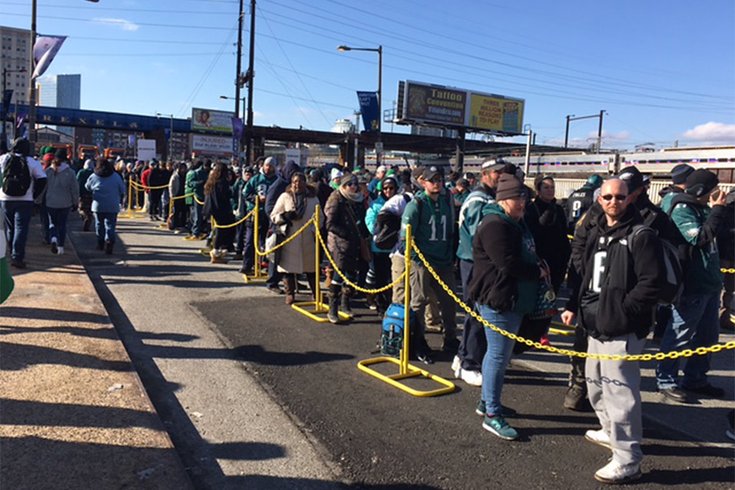 After the Eagles parade was over, lines quickly formed outside 30th Street Station for Regional Rail service.

Hundreds of thousands of fans leaving the city on public transit after watching the Philadelphia Eagles' Super Bowl parade can expect delays as they head for home.

Outbound service on the 11 lines in service on SEPTA's Regional Rail on Thursday began around 2 p.m.

After the parade ended, huge numbers of riders were being assigned to queues corresponding to their Regional Rail, which led to some confusion, according to Philly.com. Trains were set to run on intervals of every half-hour or hour, depending on the line.

Some riders tweeted that they had been waiting in line outside for as long as two hours.

What’s going on with your trains? Been outside in line for an hour and a half and not moving.

A tweet from another rider claimed that things apparently got testy on one Trenton line train.

"The Eagles' post-parade has officially devolved – fight breaks out on Septa train to Trenton. One dude has black eye and there are no more "Fly Eagles Fly" chants," wrote the user, who goes by the Twitter handle @CRedRojo.

The Eagles’ post-parade has officially devolved — fight breaks out on Septa train to Trenton. One dude has black eye and there are no more “Fly Eagles Fly” chants.

Some riders applauded SEPTA for their preparations ahead of parade day and for their work coordinating service and controlling the crowds, while others gave feedback for next time.

My mom drove up from Florida just for the @Eagles Super Bowl parade & we had the BEST time! Shout out to the awesome fans, @PhiladelphiaGov & @SEPTA for making everything from the trains to the walking to the standing & waiting easy & fun! #SuperBowlChamps #FlyEaglesFly pic.twitter.com/dHIC3QEksw

If you all are taking feedback - the morning set up I felt worked great. Lots of helpful info. The afternoon set up leaves a lot to be desired. Not enough info, unclear directions for departure, and the line needs more trash cans

The last Regional Rail trains will move out of Center City around 9:30 p.m., excluding the Airport line, which will operate hourly between Philadelphia International Airport and 30th Street Station for the rest of the service day.

On the subways, service to all stops on the Broad Street and Market-Frankford lines will resume at 7 p.m., but rides will remain free for the rest of the day, SEPTA said.

SEPTA had closed a number of subway stops in anticipation of the festivities to streamline transit for paradegoers.

Service to all #SEPTA MFL and BSL stations will resume at 7 p.m. Rides are still free on MFL and BSL for the rest of today’s service day.

Regular service to all #SEPTA City Trolley stations will resume at 7 p.m.

SEPTA announced around 3:30 p.m. Thursday that it had shut down the stop at Cecil B. Moore Avenue along the Broad Street Line. Instead, the transportation authority recommended riders use the Girard Avenue or North Philadelphia stations as alternatives.

Trains began resuming service to the station around 5 p.m.

BSL: Southbound service will bypass Cecil B Moore Station until further notice due to congestion. Passengers may board/exit at Girard or North Philadelphia Station.

SEPTA kept open 13th Street Station on the Market-Frankford Line, but they encouraged paradegoers to avoid using the congested stop if they could help it.

MFL: Select westbound trains will bypass 8th Street Station due to congestion. Expect delays of up to 10 minutes.

The Walnut-Locust stop on the Broad Street line was closed because of overcrowding around 10 a.m., but reopened around 1 p.m.

On the trolleys, service will resume to all stops around 7 p.m.

Twenty-seven buses were also detoured for the parade.

SERVICE UPDATE: We have resumed modified EB to NJ at this time. Riders can only board at 9th/Locust station. Trains are departing approximately every 8 minutes. Trains will only be stopping at Broadway, Ferry, Woodcrest and Lindenwold.

Service in both directions will be back on a normal schedule by Thursday night. Expect normal service to return by 7:30 p.m. on westbound trains and 8:09 p.m. for eastbound trains.