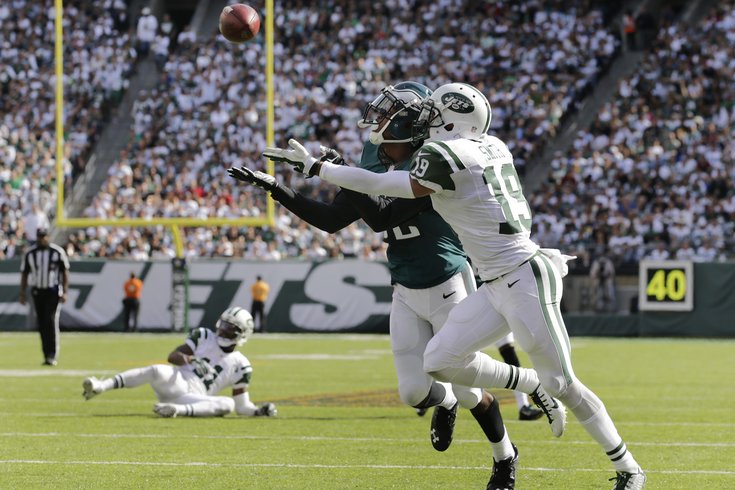 A common phrase you would hear yelled out during WR-CB one-on-one drills during Eagles training camp was, "Look and lean! LOOK AND LEAN!" That's a common technique used by defensive backs when defending vertical throws down the field.

"If it's a fade ball down the sideline, or maybe in the seam, once we're in 'phase,' we look back (at the football) and we lean on the receiver so he won't drift away from you," he said. "After you run down the field and you're in position, we look back at the ball, we lean on the receiver and we squeeze him out, push him to the sideline, try to (steer) him out of bounds without pushing him, but at the same time attacking the ball. That's a huge emphasis, because if you don't look and you lean, it's pass interference. Or if you look, but don't lean, the receiver is going to drift away and catch the ball."

In 2014, there was a lot of leaning, but not much looking, as Cary Williams and Bradley Fletcher were repeatedly toasted down the field when they failed to get their heads around to locate the football.

Of course, as Rowe noted, looking to find the football is useless if you're not in good position to make a play on the ball, which the Eagles call being in "phase."

"Once you're in 'phase,' it basically means you're in good position," Rowe said. "So if I'm behind you, I'm not in 'phase.' But if I'm side-by-side or a little bit on top, then I'm in 'phase.' It means I have good body position. That's an Undlin term. I never used that in college, but I hear it so much now that it's normal to me."

Against the Jets last week, Rowe looked and leaned his way into an interception. Watch how he gets even with Jets WR Devin Smith, feels comfortable enough with his body position (or, say it with me... "phase"), and gets his head around to locate the ball and make the play.

And here's Nolan Carroll with even better coverage on Smith, although it doesn't result in a pick. This is textbook "look and lean."

During training camp, a lot was made of Cory Undlin being a better teacher of technique than former DB coach John Lovett. Well, here's an example of what that actually means.