Eagles' first preseason game is make or break for many rookies 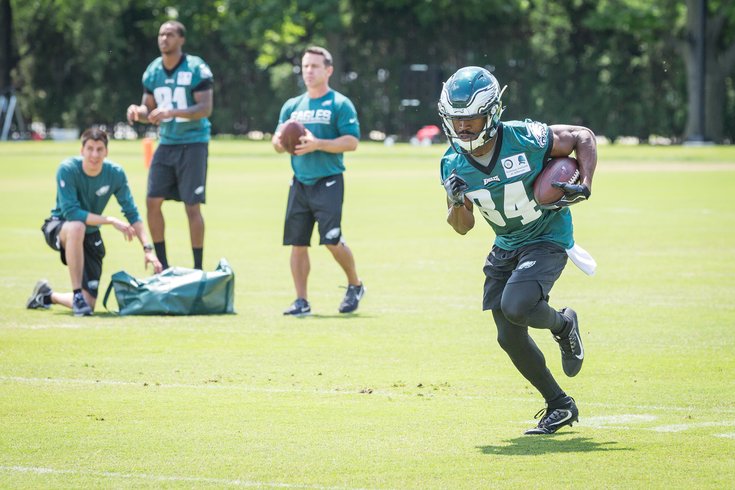 Tim Wilson during OTAs at the NovaCare Complex.

For anyone whose ever watched an episode of HBO's Hard Knocks, you know how important the typically mundane first NFL preseason game is for a great many players on the field.

While the top names are either holding clipboards, or checking out of the game after a series or two, the third- and fourth-team offensive and defensive units take the majority of the reps they receive deadly seriously. These rookies and young players are competition for upset spots on the 53-man roster, 10-man practice squad and putting together a tape against NFL players at full speed.

For players like undrafted Eagles' rookie Tim Wilson, Thursday night's exhibition tilt against the Steelers will be the biggest moment of his professional life.

"It’s a lifetime goal," Wilson, a Radnor, PA native and East Stroudsburg alum who made the 90-man training camp roster in a tryout, said. "It's definitely a checkmark on my list of goals and I am not done. I have more stuff to do and I am not taking anything for granted.

"It's huge — it's a an interview for all 32 teams. I have to go out there and do my assignments, do my job and play football. My whole family is coming. I might have some butterflies, but having them there will be great support for me."

Wilson, of course, is a longshot to get a job this fall but the simple fact that he'll be there to begin with is the kind of fairytale story that makes football so great.

One player who likely will make the Eagles, offensive lineman Matt Pryor, played big time college football at TCU and was drafted in the sixth round back in April. Pryor is ready to get his first taste of NFL football.

"I played in some pretty big games," Prior, who has played both guard and tackle in practice, said. "It’s a new setting. I don’t know what to expect but I feel like college has set me up for this. With a lot of people it's something to check off, it’s a big stepping stone to set how my career goes. I want to take advantage of it."

Pryor, Wilson and the Eagles' other rookies got a special taste of what may be to come during the team's public practice at Lincoln Financial Field Sunday. With E-A-G-L-E-S chants abound and deafening cheers for positive plays, a crowd of over 40,000 set the tone for what could be a preseason unlike any other.

“It’s a pretty cool experience to walk out in an NFL stadium," undrafted rookie Joe Ostman, a pass rusher who has turned heads in training camp, said. "You get to play and compete — it's what I've been dreaming of my entire life."

"It kind of got my feet wet for the atmosphere," Wilson said. "The crowd is just crazy. They bring the energy and the noise. playing at East Stroudburg, we didn’t play in front of a very big crowd."

Expect a pretty amped crowd Thursday for the 7 p.m. kickoff, as many fans will have their first chance to see the Super Bowl champs on the field for the first time since February 4.

And expect some pretty amped players a well — as the virtually unknown third and fourth teams play for their football lives.

"It’s a big milestone for me," Ostman said. "It's an opportunity I worked for my entire life and thankfully it's here. Now, it's just up to me to go make the most of it and to play to the best of my ability, as hard as I can."