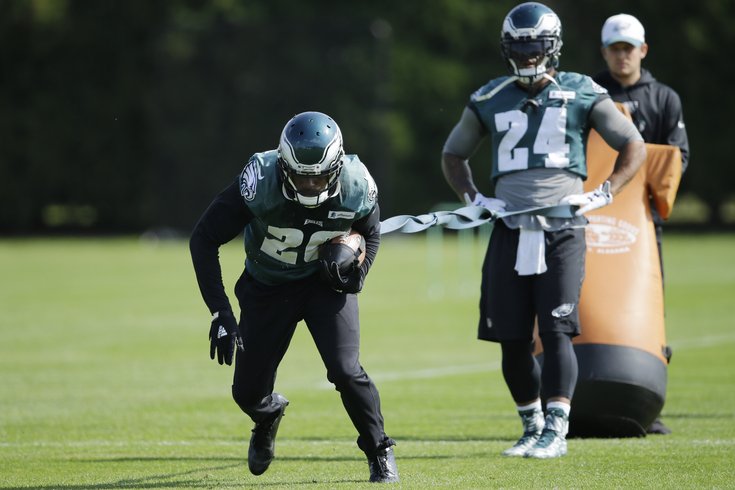 I get that #SportsScience is a big part of Chip Kelly's regimen, but having guys attach themselves with umbilical cords is weird, and I'm not sure exactly what purpose it serves.

The Eagles' injury report is beginning to thin out a bit, after a string of games in which they had 10 or more players on their official report. The Giants, meanwhile, are very banged up. Here's a look at the Eagles' and Giants' injuries, with analysis.

• ILB Kiko Alonso (knee): Alonso will miss his fourth game, however, the Eagles have gotten fantastic play out of rookie ILB Jordan Hicks in Alonso's absence.

• ILB Mychal Kendricks (hamstring): With Kendricks and Alonso out, as noted, the Eagles are in capable hands with DeMeco Ryans and Jordan Hicks in reserve.

• DE Brandon Bair (groin): Bair has played well in a reserve role for the Eagles. He went out last week just as Taylor Hart got healthy.

• WR Nelson Agholor (ankle): This will be the first game that Agholor will miss as a pro. Josh Huff will start in his absence.

• RB Ryan Mathews (groin): This is the first time that Mathews has appeared on the Eagles' injury report, but it's worth noting that he has only played all 16 games once in his career. When he wasn't missing games, he was often playing with some kind of injury. From 2010-2014, Mathews appeared on the injury report a staggering 46 times. You can expect a healthy dose of DeMarco Murray on Monday night, provided the Eagles are able to give him some blocking.

• CB Prince Amukamara (pectoral): Amukamara is the Giants' best corner, and that's on a defense that is ranked dead last in the NFL in passing yards allowed. Big loss.

• WR Victor Cruz (calf/knee): As we reported earlier in the week, Victor Cruz has not yet been cleared to be on the field, per Tom Coughlin. He has not played since tearing his patellar tendon Week 6 a year ago in Philly.

• LB Devon Kennard (hamstring): Kennard is an under-the-radar player outside of New York, but is a good player at a position where there's a significant dropoff to the next guy up.

• WR Odell Beckham Jr (hamstring): Beckham has not practiced all week, but the Eagles are preparing as if he is going to play. It is difficult, though certainly not impossible, to install a game plan the week of a game when your best player can't practice.

• LB Jon Beason (concussion): Again, LB isn't the Giants' strongest position, and the dropoff to the next guys up is significant if both Kennard and Beason cannot go. I suspect Zach Ertz and Darren Sproles will be a big part of the Eagles' game plan offensively.

• DE Robert Ayers (hamstring): Ayers is a starter at DE.

• WR Rueben Randle (hamstring): Again, with Cruz out and Beckham questionable, the Giants need Randle to play, and he likely will.