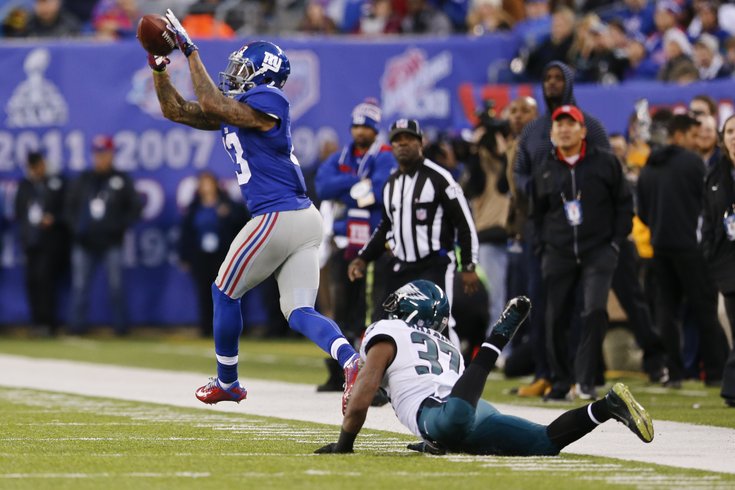 The Eagles will have their hands full with Odell Beckham Jr. for a while.

Giants wide receiver Odell Beckham Jr. hasn't practiced yet this week, but Chip Kelly seems to think that he'll be ready to go when the Giants travel to Philly to take on the Eagles for the division lead in the NFC East Monday night.

Prior to the "NFC East Championship Game" in 2013 against Dallas, Kelly was asked a question referencing a report that Dez Bryant had tweaked his back during practice that week. He replied, "I don't think anybody in this group was like, ‘Hey, we don't have to get ready this week because such and such and such and such isn't going to play.’ I know this team is not going to fall for the banana‑in‑the‑tailpipe trick. We are not concerned with that stuff."

Beckham didn't do much against the Eagles in the Giants' shutout loss in Philly last season, but he lit them up in the meaningless Week 17 game:

When asked what makes Beckham such tough player to cover, Eagles defensive coordinator Bill Davis said, "He can stop and restart as fast as anyone, and that is always a challenge. Then when he does catch the ball, he's a great open-field runner. He is a very talented runner, and so he's getting a lot of yards after the catch, and you've got to contain that part of it, as well as him turning you around with his moves. And then his hands are some of the best in the league and he's getting better as they go. We'll have our hands full with him for a while."

The Giants' official injury report will come out later today.