Eagles depth report: Some shaky spots, but overall the Eagles have great depth 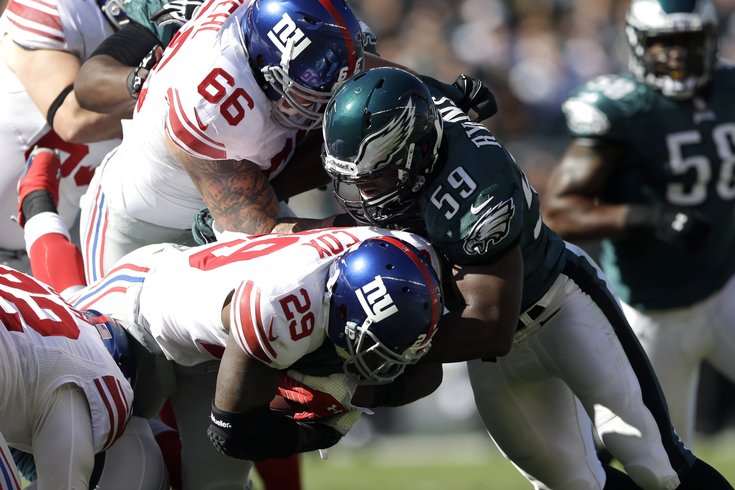 The Eagles are loaded at several positional groups, especially at ILB.

In Chip Kelly's first year with the Eagles, I remember putting together my 53-man roster projections and finding 48-49 players I liked. I had to make a case for the last 4-5 guys and shoehorn them in. This year, there are around 56-57 players I like, and it's really hard choosing which guys to leave off. That's what happens when you become a deep team. While OL, safety, and OLB depth is concerning, the Eagles have good-to-great depth at QB, RB, WR, TE, DL, and ILB. In some of those cases, their depth is outstanding. I think that's what we saw to some degree in the first two preseason games, when the Eagles' reserves beat the pants off the Colts' and Ravens' reserves.

"I think we have more depth," said Chip Kelly, "so I believe we'll cut some players that will make other rosters... Definitely more difficult (to make cuts) this year than it was in the last two years.

"We're trying to develop depth at every position, whether it be outside linebacker or inside linebacker, the secondary, running backs, wide receivers. The more players in that 46-man that go on game day that can actually contribute for you that aren't just playing a couple snaps here and there, that's what we're always looking for."

There's an argument that having quality depth is more important to a team like the Eagles than your typical franchise. There is a decent chance the Eagles will run more plays on offense than any other team in the NFL this season. Here is how many plays the Eagles ran offensively in Chip Kelly's first two seasons as head coach. As his fast-paced offense continues to get faster, expect these numbers to continue to grow.

There is an equally good chance they'll face the most plays on defense. The last two seasons:

"We're trying to keep our team fresh, and part of keeping your team fresh is being able to rotate," said Kelly.

If you have reserves you can trust, giving them snaps to relieve the starters will help keep your impact players fresh for the stretch run. It will also give you in-game advantages over teams that do not have quality depth and aren't used to playing fast-paced offenses. Of course, playing your reserves for the sake of playing them does you no good if your reserves stink.

"(Rotating players) is a good theory to have but if there's a distinct difference between your one and your two and your three, then you're probably going to lean on one and two than you are three," said Kelly. "We hope at all of our positions we have a chance to develop depth. And if you look at what our master plan was, it was to make sure we got more depth. We got it at running back, we have it at receiver, we feel like we have it in the secondary now better than we've had before."

The Eagles aren't just deep with talent. Their reserves are loaded with playing experience. By my count, there are 17 Eagles not projected to start this season who have started at least one NFL game. Those 17 players have started a total of 612 games throughout their careers:

For a frame of reference, here is how much starting experience the projected reserves have on the other NFC East teams:

Here's a look at the Eagles' depth at each positional group:

• Quarterback: You're probably not winning a Super Bowl with Mark Sanchez if you lose your QB for the season, but Sanchez proved more than capable enough to win games in reserve, as he went 4-4 last season in relief of Nick Foles (5-4 if you include the Texans game, which Sanchez played the majority of, and inherited a deficit when he entered the game).

• Running back: They are as deep and talented as any team in the NFL here, with Ryan Mathews and Darren Sproles in reserve. The Eagles probably have the best trio of running backs in the NFL.

• Wide receiver: While the Eagles don't have a Calvin Johnson type of talent in their offense, as in, there's no one guy who is going to catch 100+ passes for 1500+ yards and 15 touchdowns, what they do have is numbers in their passing game. The guys at the top of the depth chart are young and talented, while reserves like Riley Cooper and Miles Austin have plenty of starting experience.

• Offensive line: Huge concern. Even after cutting two 30-something starters, the Eagles still have the oldest projected starting offensive line in the NFL, with an average age of 29. Despite their aging OL, over the last three years, the Eagles have drafted the fewest offensive linemen in the NFL, with just one. The NFL average during that span is 4.125 drafted offensive linemen per team. Over the last two years, the Eagles are the only team in the NFL not to have drafted an offensive lineman. What they are left with is a collection of undrafted free agents, and shaky veterans. They don't have much in the way of potential up-and-comers who could be long-term starters or proven veterans with ample starting experience. They're in particularly bad shape if they lose one of their tackles. That would be a situation Kelly described above as a huge gap between the one and the two.

• Defensive line: Vinny Curry is an excellent situational pass rusher. The rest of the group is solid, with a number of young reserves with potential, but would constitute a dropoff from one to two.

• Outside linebacker: This is a problem spot. The team liked Travis Long, but he was lost to an ACL tear. Meanwhile, Marcus Smith is injured. The Eagles are going to give Curry some looks in the Predator role, and Bryan Braman is an option in an emergency. They also have Brad Jones, who can play OLB, but is better suited inside.

• Inside linebacker: Absolutely loaded. It looks like DeMeco Ryans will be the third ILB, considering the money the Eagles just paid Mychal Kendricks. That's a pretty decent guy to have in reserve. They also have third-round pick Jordan Hicks and the versatile Brad Jones, who has 36 career starts.

• Cornerback: The Eagles were deeper here before they traded Brandon Boykin and lost JaCorey Shepherd for the season with an ACL tear. Still, after Byron Maxwell and Nolan Carroll, they have 2nd round pick Eric Rowe in reserve, as well as the experience E.J. Biggers (who had a great camp) and Jaylen Watkins.

• Safety: The Eagles have a pair of special teams studs in reserve in Chris Maragos and Chris Prosinski, but beyond them, there aren't great options in reserve in terms of safeties who can play in the regular defense. Then again, almost no teams league-wide have quality safety depth. Ed Reynolds and Jerome Couplin have had their moments in the preseason games, but will there be enough room for either of them on the 53-man roster?