A recap of the opposing players the Eagles won't have to face so far in 2015, updated 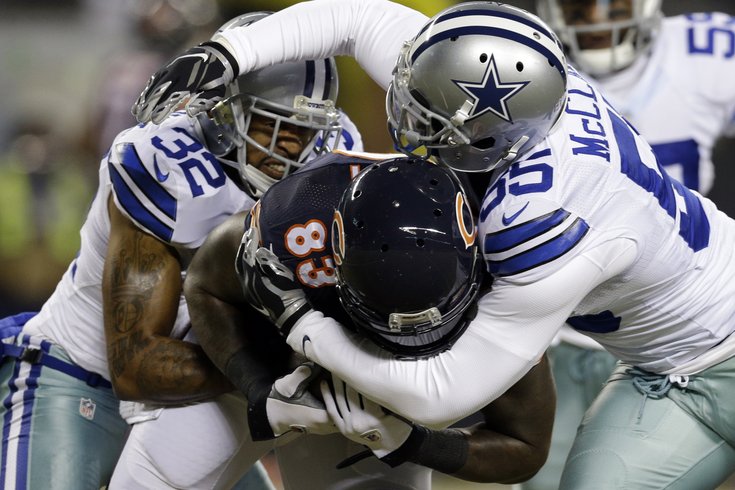 The Cowboys will be without Orlando Scandrick and Rolando McClain Week 2 against the Eagles.

So far this offseason, the Eagles have lost Travis Long and JaCorey Shepherd with ACL tears, and while those injuries hurt the Eagles' depth, they are minor losses compared to what some other teams around the league are experiencing. Many of the Eagles' opponents in 2015 will be missing key players due either to injury or suspension. Let's recap the key players they will not be facing:

• Greg Hardy, DE, Cowboys, Week 2: Hardy was originally suspended 10 games for an incident in which he used physical force against his former girlfriend Nicole Holder, which was later reduced to a four game suspension. Hardy has not yet exhausted all of his options to get that suspension reduced more, but as of now, he will miss the Week 2 game against the Eagles. The last time Hardy played a full 16 game season, he had 15 sacks for Carolina.

• Rolando McClain, ILB, Cowboys, Week 2: McClain was suspended by the league for violating the NFL's Policy and Program for Substance Abuse. That's a four game suspension. He won't play against the Eagles Week 2. McClain had 81 tackles, 1 sack, 1 forced fumble and 2 INTs for Dallas last year.

• Orlando Scandrick, CB, Cowboys, Week 2 and Week 9: Scandrick tore his ACL and MCL, and will be out for the entirety of the 2015 season. Scandrick is easily the Cowboys' best defensive back.

• Sheldon Richardson, DE, Jets, Week 3: Richardson was suspended by the league for violating the NFL's Policy and Program for Substance Abuse. That's a four game suspension. He won't play against the Eagles Week 3. Richardson is one of the best interior defenders in the game. Last season, he had 66 tackles and 8 sacks on his way to the Pro Bowl.

• Geno Smith (possibly), QB, Jets, Week 3: Smith was punched in the face on August 11th by former teammate IK Enemkpali, broke his jaw, and will be out 6-10 weeks. The Eagles' Week 3 game against the Jets is on September 27th, which would be roughly six and a half weeks after the August 11th incident. Even if Smith is able to play, how effective can he be with that incident stripping him of most of training camp and all of the preseason?

• Junior Galette, OLB, Redskins, Week 4 and Week 16: Galette was a controversial signing by the Redskins, but there's little question about how good of a player he is. Galatte ruptured his Achilles and is done for the season. Galette was reportedly having a very good camp, and ESPN Redskins reporter John Keim classified the injury as "devastating."

• Niles Paul, TE, Redskins, Week 4 and Week 16: Paul fractured and dislocated his ankle, and is done for the season. He was always a valuable, versatile reserve player for the Redskins, but was slated to win the starting TE job this season. The Skins also lost backup TE Logan Paulsen for the season with a toe injury.

• Will Beatty, OT, Giants, Week 6: Beatty tore a pectoral muscle in May while lifting weights. Beatty is the Giants' starting LT. His loss weakens two positions. Rookie Ereck Flowers will now be asked to start right away at LT and it appears Marshall Newhouse will be filling in at RT. He'll miss the Week 6 game against Philly, but could be back for the second matchup.

• Kelvin Benjamin, WR, Panthers, Week 7: Benjamin tore his ACL and will be out for the entirety of the 2015 season. Benjamin had 73 catches for 1008 yards and 9 TDs as a rookie for the Panthers in 2014. His injury leaves Carolina with some very poor options at WR. Per Ourlads' depth charts, the projected starters there are Corey Brown and Tedd Ginn.

• Dion Jordan, OLB, Dolphins, Week 10: Jordan was suspended by the league for violating the NFL's Policy and Program for Substance Abuse. As a repeat offender, Jordan's 2015 season is over. Jordan has a world of talent, but has been an enormous disappointment to the Dolphins as the #3 overall pick in the 2013 NFL Draft.

• Daryl Washington, ILB, Cardinals, Week 15: Washington is one of the most talented linebackers in the league, but he has not yet applied for reinstatement after being suspended for the entire 2014 season. If and when Washington does get reinstated, he faces another suspension for violating the NFL personal conduct policy. His situation is a little more unclear than some of the players above, and while he's not a certainty to miss the Week 15 game against Philly, it appears very likely he will.

• Crowd noise, Week 1: The Falcons were caught piping fake crowd noise into their stadium in 2013 and 2014, for which they will forfeit a fifth-round pick in the 2016 draft and $350,000. I can't blame the Falcons for trying to give one of the worst sports cities in America a little noise boost, but presumably, the Falcons have learned their lesson.
Follow Jimmy on Twitter: @JimmyKempski