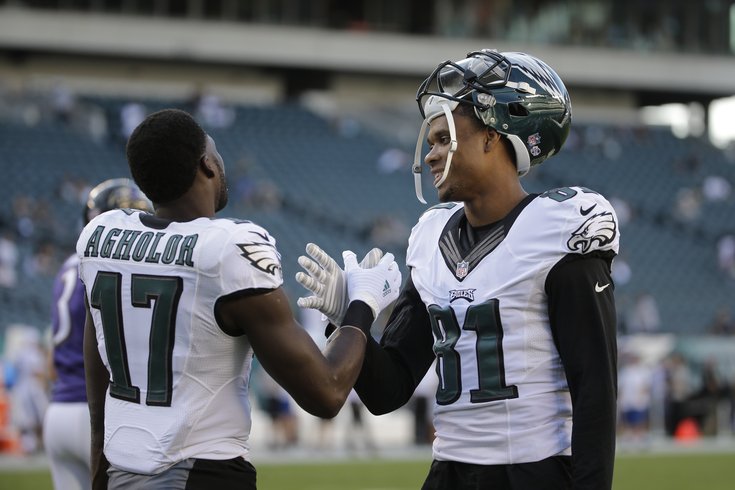 Draft Jordan Matthews early with confidence, but let someone else reach for Nelson Agholor.

As we noted yesterday, the Eagles have talent in numbers on offense, which makes them a difficult team to figure out from a fantasy football perspective. Yesterday, Evan Silva of Rotoworld put out his well-researched "Top 200" list, and seven Eagles players made the cut. Let's review all seven.

#JimmySays: I think 15 is a good spot for Murray. I wouldn't touch him in the first round. The Eagles simply have too many weapons in their offense, especially in the backfield, for Murray to put up numbers anywhere remotely close to what he did a year ago. I do think Silva's note on Murray potentially leading the league in TDs is interesting. He could, if they really prioritize using him in the red zone. However, Ryan Mathews could get his share of opportunities down there too, as he is also a very physical runner.

#JimmySays: I've been on the Matthews hype train since he got to Philly. Barring injury, he's going to lead the Eagles in receptions, and has an outside chance of putting up huge numbers, as in, close to 100 catches.

#JimmySays: Silva's blurb is on the right track. Agholor is a risk. While we have seen Agholor's obvious talent in the first two preseason games, we have also seen concentration lapses that have led to drops. In Zach Ertz's rookie season, Ertz had some drops in the preseason games, and he did not see the field early in his rookie season as a a result. The team didn't trust him. I'd be inclined to let someone else draft Agholor, let them be disappointed by his first month with the team, and trade for him while his stock is low.

#JimmySays: Yep. Jason Peters has Murray and Mathews both slated for 1000 yard seasons, and really, it's not that crazy of a projection. I would feel comfortable pulling the trigger earlier than 86, because I think he'll put up numbers even with Murray ahead of him. And as Silva notes, if Murray goes down, Mathews will be "the guy," and could put up huge numbers.

#JimmySays: Silva has Bradford as his 15th ranked QB, which I think is fair. Personally, I still have serious concerns about Bradford's mobility, in that he has none. He's not going to be able to get away from hits this season from what I've seen throughout training camp. If you're late drafting a QB, I like the idea of pairing Bradford with another QB around the 10-15 range. That way you can ride Bradford if he's healthy, but have a competent reserve if/when he's not.

#JimmySays: Play the long game. Even if Ertz isn't ready Week 1 (which I think he will be), I'd have him way higher than 140. Your TE production may suffer early, but once the season gets rolling and Ertz gets back into the flow of things, he could be a "top 5" type of TE, production-wise. Maybe this is another scenario like with Agholor above where you let someone else draft Ertz, and then try to trade for him when his owner is disappointed by early returns on investment.

#JimmySays: The Eagles keep saying they want to get Sproles more involved, and while he has gotten looks as a slot receiver, the Eagles offense is just so loaded with options both in the run game and passing game.

Silva did not list defenses / special teams or kickers, but the Eagles are also appealing in both regards. The Eagles are likely going to put up a lot of points in 2015, so you can't go wrong with Cody Parkey, who was also 4/4 from beyond 50 last season.

As for DEF/ST, the Eagles scored 11 touchdowns on defense and special teams a year ago. They aren't repeating that, but should still be a stellar unit on special teams, and their defense should rack up a lot of sacks. I'd have them near the top of that list.