Are the Eagles Super Bowl contenders? They kinda have some things going for them 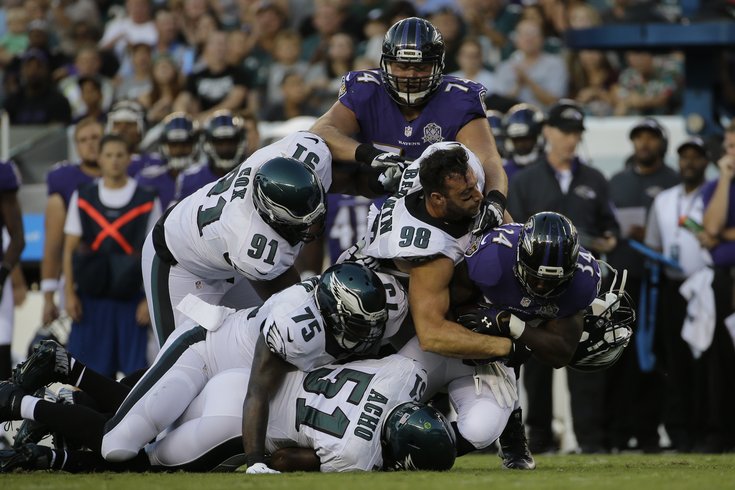 The Eagles' run defense is already really good, and will likely only get better.

It took me a while, but I see it. The Eagles have some major strengths, and their roster may be significantly better than the one they fielded a year ago.

When we think of the Eagles as a Super Bowl contender, Sam Bradford will of course always be at the forefront of that discussion. I've watched Sam Bradford in a couple dozen practices since May as well as one drive in the preseason, and while he has looked good throwing against no pass rush, I have no idea what he'll look like when opposing defenders are trying to destroy him. So there's that.

And then there's the lack of OL cohesion with two new starters at guard, shaky OL depth, and issues from a year ago that need to be fixed, like the excessive number of turnovers and big plays allowed by the secondary.

The Eagles are far from a perfect team, and their biggest question mark is at the most important position in sports. However, they have some really intriguing things going for them and possess the potential to be a "top-5" kind of team in a number of ways:

The Eagles may have the best trio of running backs in the NFL in DeMarco Murray, Ryan Mathews, and Darren Sproles. Murray and Mathews are hard runners that opposing defenses will tire of tackling, which could lead to big second halves for the Eagles on the ground.

While LeSean McCoy was an outstanding back in Philly for years, the north-south running styles of Murray and Mathews will put more stress on defenses that already have to deal with keeping up with the Eagles' fast-paced offense. If both backs can stay healthy, which is a significant "if," the Eagles can keep them fresh through the season by splitting up their carries.

The Eagles don't have a Calvin Johnson type of talent in their offense. There's no one guy who is going to catch 100+ passes for 1500+ yards and 15 touchdowns. What the Eagles do have, however, is numbers in their passing game.

• Jordan Matthews is being underrated both nationally and locally, in my opinion, and could have a huge season as a volume catcher in 2015.

• Nelson Agholor needs to cut down on the concentration lapses, but his pure talent is obvious.

• Zach Ertz is already one of the best pass-catching tight ends in the NFL, and he has yet to even become a regular starter early in his career. But he is a matchup nightmare for opposing defenses. Want to put a corner or safety on him? Ertz will have a huge size advantage. Want to cover him with a linebacker? Good luck.

• Over the last five seasons, Darren Sproles has averaged 66 catches per season. The Eagles underused Sproles in their offense a year ago, but he has gotten a lot of opportunities as a slot receiver during training camp and the preseason games. Sproles has looked like he can do some damage in that role.

• DeMarco Murray has averaged 55 catches the last two seasons. He's no stranger to catching the ball out of the backfield in his own right.

• Josh Huff is a bit of an X-factor. Again, like Agholor, Huff needs to cut out the mental lapses, but he clearly has some explosion to his game.

• The Eagles have veteran depth in Brent Celek, Miles Austin, and Riley Cooper. While I wouldn't want any of the three to be primary targets in my passing offense by any stretch, at least the Eagles have players in reserve who have been NFL starters.

• Even a guy like Trey Burton has done some impressive things throughout camp, and has gotten open while playing with the first team offense in the preseason.

How the Eagles deploy their receiving weapons will be interesting. They are loaded with personnel options there.

LT, RT, and C are the three most important positions along the offensive line, in whatever order you prefer, in my opinion. They are the hardest to fill with quality talent. While the guards still have something to prove and the Eagles' depth along their OL is shaky, name a better LT-C-RT trio than Jason Peters, Jason Kelce, and Lane Johnson.

First and foremost on defense, the Eagles want to stop the run, and in 2014 they allowed just 3.7 yards per carry, which was good for fifth-best in the NFL. The Eagles' starting three of Fletcher Cox, Bennie Logan and Cedric Thornton form one of the best defensive lines in the NFL, but they are not recognized as such nationally. For example, Sports Illustrated ranked their 10 best defensive lines, and the Eagles did not make the cut. Maybe it's because that trio had just five sacks between them a year ago, or maybe it's because none of them run their mouths. But all three are excellent against the run, and Logan has emerged this offseason as a player who could make a huge jump in 2015.

It's impressive that the Eagles were so effective against the run a year ago, considering the high number of injuries they suffered to the ILBs. Hell, Casey Matthews started 11 games last year. Add in tackling machine Kiko Alonso to the mix, a healthy Mychal Kendricks, and DeMeco Ryans' return, and the Eagles could potentially be even better against the run in 2015.

Above, I noted that the Eagles don't have a Calvin Johnson type of receiver, but are strong in their numbers. Similarly, the Eagles defense doesn't have a J.J. Watt type of pass rusher, but they are loaded with players who can get to the quarterback.

• Connor Barwin was fourth in the NFL with 14.5 sacks a year ago, which is especially impressive considering that the Eagles ask him to do so much more than get after the passer. That number is likely to come down this season, but clearly Barwin has pass rush skills.

• Brandon Graham has always been able to get after the quarterback, but has never gotten many opportunities to do so. He'll start in 2015.

• Vinny Curry had 9 sacks (and several more taken away by penalty), as well as four forced fumbles.

• Fletcher Cox doesn't have impressive sack numbers, but when you watch the tape he's incredibly disruptive, and the Eagles' best player on defense.

• Even a guy like Mychal Kendricks is outstanding as a blitzer. In his last 16 games, Kendricks has seven sacks.

Really, the Eagles' front seven as a whole is among the NFL's best. There are no holes among the starters, and several impact players.

In Chip Kelly's first year with the Eagles, I remember putting together my 53-man roster projections and finding 48-49 players I liked. I had to make a case for the last 4-5 guys and shoehorn them in. This year, there are around 55-56 players I like, and it's really hard choosing which guys to leave off. That's what happens when you become a deep team. While OL, safety, and OLB depth is concerning, the Eagles have at least good depth at QB, RB, WR, TE, DL, and ILB. In some of those cases, their depth is outstanding. And I think that's what we saw to some degree in the first two preseason games, when the Eagles' reserves beat the pants off the Colts' and Ravens' reserves.

Having quality depth is more important to a team like the Eagles than your typical franchise. There is a decent chance the Eagles will run more plays on offense than any other team in the NFL this season. There is an equally good chance they'll face the most plays on defense. If you have reserves you can trust, giving them snaps to relieve the starters will help keep your impact players fresh for the stretch run. It will also give you in-game advantages over teams that do not have quality depth and aren't used to playing fast-paced offenses.

The Eagles easily had the best special teams units in the NFL last year, and while they are unlikely to repeat the absurd number of scores they produced on special teams a year ago, this unit should be stellar once again.

Can Sam Bradford play all 16 games, and be merely "good?" That may be a lot to ask, but if so, the Eagles can be as dangerous as any team in the NFC.