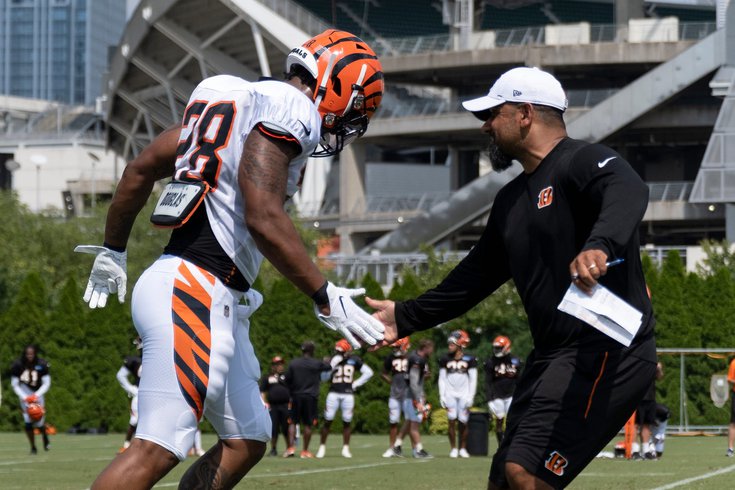 According to a report, the Eagles have found their replacement for Duce Staley as the team's running back coach: Jemal Singleton. Not only that, Singleton is reportedly set to also hold the same assistant head coach title under Nick Sirianni that Staley held under Doug Pederson.

Staley, who spent a decade as an assistant for his former team, left the Eagles to take a lateral move with the Lions, being named their running back coach, after he was once again passed over for a promotion.

Now, he'll be replaced by Singleton, who had only recently arrived at Kentucky after leaving the Cincinnati Bengals, where he had coached for two season. The 45-year-old Air Force alum explained his decision to return to the college ranks during his introductory press conference last month. Here's more from KentuckySportsRadio.com, who broke the news of Singleton's hiring:

"I’m a college coach at heart. There’s a part of coaching college football that really appeals to me.  (It’s) the recruiting process, the helping a young man develop not only as a football player but as a person, meeting families and those type of things. So deep down, that’s always been something that I love and enjoy. Really, my opportunity to go to the NFL, was to be able to become a better college coach."  [KentuckySportsRadio.com]

Now, it appears, just a month later, he's been lured back to the professional level under Sirianni.

Here's a look at Singelton's resume prior to joining Kentucky, where, you know, he never actually coached a game.

So, what does Singleton look for in his running backs? Here's more from his introductory press conference at Kentucky in which he explained a little bit about his philosophy:

"As far as what I look for in a running back that’s probably one of the things that I love the most about this position, it comes in so many different sizes and shapes. I don’t care if you’re 5-9, I don’t care if you’re 6-1, you can be an effective running back and be very explosive and do a lot of those things. Just at my last stop you had Joe Mixon who’s a 6-footer, big strong guy and then there’s (Giovanni) Bernard right behind him and he’s a smaller scatter type back so it really a lot of it just depends on that type of player.

There’s some specific skill sets that I look for. For me, short area quickness is huge I think, being able to make a guy miss whether it’s running over or shake him is extremely important. How do you get those extra yards on a carry? If you say yeah well what height do you look for? I don’t look for any of that I look for football ability, football movement and there isn’t one specific trait that I think lends itself to success more than another.

A good example I like to use is Clyde Edwards-Helaire, a player that got drafted first round to the Kansas City Chiefs. If you want to base it off of his 40 time you probably don’t touch him. I think he ran a 4.6-plus 40 time but he can make a guy miss in a phone booth and I think that’s the part is how do you make guys miss and do you have a skill to do that? It can come in a lot of different sizes and shapes."  [kentuckysportsradio.com]

Currently, the Eagles running back room includes Miles Sanders, who is coming off a down year in 2020 (but some of that can certainly be explained away by a down year overall for the Eagles), Boston Scott, Corey Clement and Jason Huntley. The first two seems like locks to return for the 2021 season despite all the changes expected to the roster.

With the addition of Singleton, however, it appears the coaching overhaul is done, as the Eagles now have all their traditional positional coaching vacancies filled.