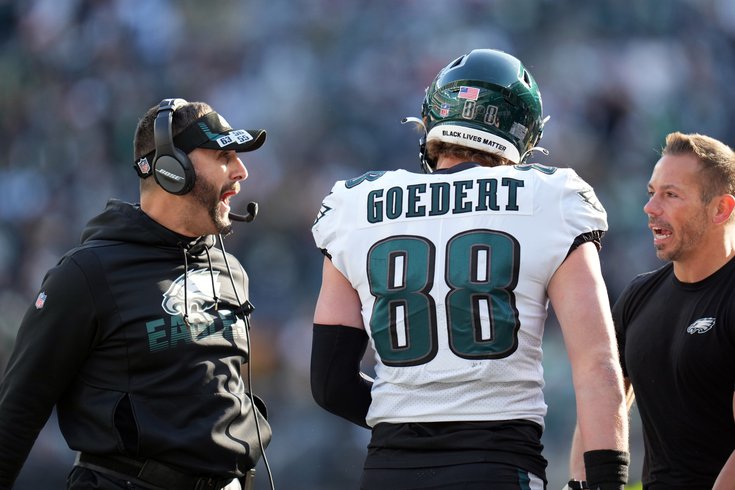 Minshew came out on fire, completing his first 11 passes for 165 yards, 2 TDs, 0 INTs, and a perfect passer rating of 158.3. He finished 20-of-25 for 242 yards and those 2 TDs, with no turnovers. His first TD strike of the game to Dallas Goedert was one of his better throws:

Gardner Minshew starts a perfect three for three for 61 yards including his first touchdown with the Eagles!!!

Despite that perfect passer rating early on, Minshew wasn't perfect, if we're going to nitpick, as his passes were often underthrown, but seemed to find their way to the target anyway, probably helped by a bad Jets defense.

But ultimately, the results were excellent. Minshew led the Eagles to scores on each of their first seven possessions. The first three were touchdowns, followed by four Jake Elliott field goals.

At a minimum, Minshew showed that he can be a quality, inexpensive backup capable of winning games.

2) The 'No Controversy' Award 😱: Jalen Hurts

With Jalen Hurts coming off his worst game as a pro and Minshew having immediate success in his first start with the Eagles, Nick Sirianni definitively stated that Hurts will remain the Eagles' starting quarterback going forward, putting to bed any controversy.

There will no doubt be debates as to whether that is the right decision or not, but Sirianni and the Eagles were smart to get ahead of the inevitable questions about Hurts' status this season with the team.

Hurts could probably use a good game in his next outing against the Washington Football Team Week 15, though.

Gallas (in suspiciously disguised voice): "Yes hello, I think that Gardner Minshew should be the starting quarterback of this team going forward. He knows the value of a good tight end."

Goedert had 6 catches on 6 targets for 105 yards and 2 TDs in Minshew's first start. We showed the first one above. Here was his second one.

Throwing the ball to the best players is an interesting concept.

MORE: What we learned about the Eagles offense without Jalen Hurts

The run game looked different on Sunday without Hurts, but it was still effective, as the Eagles rumbled for 185 yards on the ground. This is now the sixth straight game that the Birds have rushed for 175 yards, which is a pretty rare feat, particularly in modern football.

The Eagles are the first team since the 1985 Super Bowl Bears to rush for 175 yards in 6 straight games and only the 9th team in the last 50 years.

It’s the first time the Eagles have rushed for 175 yards in 6 straight since 1949, when they won their second straight NFL title.

Sanders led the Eagles with 24 carries for 120 yards. He did a much better job of hitting the hole and getting the yards that were there, as opposed to dancing in the backfield, as he has done on occasion this season.

Sanders left early when he injured the same ankle he hurt against the Raiders earlier this season that caused him to miss three games. His availability will be in question for Week 15, but he'll have two weeks to heal up.

5) The 'Adjustment' Award 🔧: The Eagles' defense

The Eagles' defense looked bad early, giving up touchdowns on each of the Jets' first three drives. Whatever adjustments were made by Jonathan Gannon worked, because the Jets did not score the rest of the day. The Eagles would ultimately hold the Jets to 281 total yards.

Did anyone see this game starting out as a shootout? The first six possessions went like so:

Siposs didn't punt until the Eagles' final drive, after Nate Herbig, in the game in relief of Jason Kelce, sailed a snap over the head of Minshew, killing the Birds' drive. Some might say, "Oh man, I hope Kelce is back in time for the Eagles' next game, because I do not want to see Herbig in there at center in a meaningful game."

How dare you, if so. Herbig was just trying to be a good teammate by getting Siposs some action.

Not having a bye until Week 14 is rough, as Kelce acknowledged after the NFL released the schedules for all 32 teams in May. But, now that it's here, the Eagles have a chance to rest their minds and bodies in advance of a four-game stretch run that will determine if they make the playoffs of not.

As of this writing (it's 5:48 p.m. EST as I type this), if the NFL season ended right this second, not counting whatever happens in the late afternoon games, the Eagles would be the 7 seed in the NFC, as they benefited from losses by the Vikings and Falcons on Sunday.

They'll be knocked out of the 7 seed spot if the Football Team can beat the Raiders in Las Vegas. And of course, the Eagles' next opponent is... yep, the Football Team, in Philly. The Eagles won't be tanking that game this year.

MORE: The good, bad and ugly from the first half of Eagles-Jets