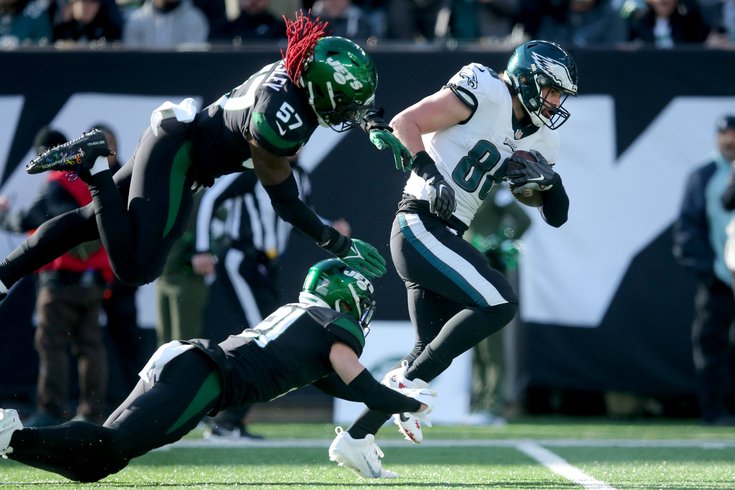 The Eagles' offense is cooking with Gardner Minshew at quarterback, but they're locked in a 24-18 battle with the Jets as a result of defensive ineptitude.

• Dallas Goedert was basically a non-entity in the Eagles' shocking loss to the Giants last week, so it was encouraging to see them get him the ball early in this one, making sure one of their top weapons could actually have an impact on the game. It started with a screen pass, where Goedert got excellent blocking from the right side of Philadelphia's line to pick up a first down and a nice chunk of yards early in the drive. Gardner Minshew would hit him again for an intermediate gain, with the Eagles' offensive line killing the Jets on early downs to set up second-and-short plays that are very tough for any defense to deal with.

Then there was the big shot, the play-action throw from under center that found Goedert with just a little bit of work left to do. Goedert proved capable of doing the rest, shrugging off a hit from the closing safety for a relatively easy touchdown:

(This is a good example of how important credible playaction is to any successful offense. Goedert runs right through the linebacking core on this play as a result of their hesitation to drop back, and that's all he needed to get open.)

Hard to start better than the Eagles did on offense against the Jets. Shrugging off a busted play on the first snap, they were near-perfect from there, taking the early lead back from the home team, even if it was only for a moment.

Goedert's dominance did not stop after the first Philadelphia possession, and whether it was a product of Minshew having good chemistry with his tight end or Nick Sirianni making him a point of emphasis this week, the tight end flat-out dominated in the first half. He closed out the Eagles' second drive of the game with a touchdown on third down, using a Boston Scott pick to get free and pull the Eagles back in front.

His full skill set has been on display so far today. Power when he has needed it, speed when he's turning the corner with a screen, patience as he waits for blockers, this has all the makings of a dream performance.

• Gardner Minshew coming out and playing well was a mortal lock — did you think we would get through this season without some sort of Eagles quarterback controversy? Through 30 minutes, though, most of what we saw was what can happen if the Eagles' quarterback can execute some of the simple stuff they've been missing with Jalen Hurts under center this year, with Minshew making the must-have throws the injured starter has botched in recent weeks.

The overall offensive structure felt very familiar to anyone watching this team all season. There was a blend of shotgun and under-center snaps, frequent screen passes, and RPOs that allowed Minshew to make a judgment call based on what he was seeing upfront. Sirianni didn't ask Minshew to come up and be Peyton Manning, and the backup looked pretty damn good as a result.

Minshew deserves his own credit for his first-half success, obviously. There was a nice, zippy pass to Quez Watkins on a critical third-down on their second series, a throw with minuscule margin for error that he managed to fit in there just fine. There's a lot of game left for him to faceplant, and he had skill position guys bail him out of a couple of tough throws (predominantly his throw to Watkins in the final minute), but he has looked up to the task so far.

• To me, the first half says more about Philadelphia's elite offensive line than anything else. They are giving everybody opportunities to make plays, individual players simply have to take advantage of the space they're creating. Minshew will be the focus for a lot of people, but it extends to guys like Kenneth Gainwell, who is back in a heavy contributing role as a result of injuries and illness to other guys higher on the depth chart.

Good on him, however, for taking advantage of an opportunity to make a difference on Sunday. Gainwell finished off a drive with a great run up the middle midway through the second quarter, squeezing into a small hole for Philly's third touchdown of the day:

Gainwell and Miles Sanders both looked spry in the first half, with Sanders' side-to-side agility buying some extra yards even when the Eagles didn't blow the Jets away on the blocks. If the Eagles continue to win in the trenches on offense, they have a great chance to win no matter how bad the defense looks.

• DeVonta Smith makes things happen when he gets the ball:

“DeVonta Smith is too small to play in the NFL” pic.twitter.com/mtjscDJmTO

• Hey, a sack, remember those? Josh Sweat was the guy to finally get his hands on Zach Wilson, earning the first stop of the day for either team. Not exactly a banner day for the defense, so you take the positives where you can get them.

• The Eagles' defense had an excuse to fail on the first drive of the game, put in a tough spot by their special teams and still in the process of shaking out the cobwebs to open the game. New York's second possession, on the other hand, was just a pitiful display from Jonathan Gannon's unit, a series where they got pushed around physically and looked slow in space on the vast majority of plays.

Though Gannon has proven willing to adjust what they do in order to put more pressure on opponents, his worst tendencies and the biggest weaknesses of the defense shone through in the first quarter. The Eagles played soft, predictable coverage, and rookie QB Zach Wilson used the opportunity as a confidence-gaining exercise, dinking and dunking his way down the field while providing his receivers room for YAC. There was no need to take any real shots downfield — when you can pick up chunk yards without needing to make risky throws, you're going to go that route every single time.

But even if you don't have a problem with the general scheme, the execution leaves a lot to be desired. Who the hell knows what is supposed to happen on this play, but I doubt this is the zone scheme they drew up in practice this week or during Saturday's walkthrough:

Watching the Eagles and Gannon's approach every week, I am reminded of this Spongebob clip:

When the Eagles mix it up with their coverages, blitz on occasion, and at least make teams think about what they're doing, they look pretty good. When they sit in a soft zone and allow opposing quarterbacks to make predictable reads from a clean pocket, they are doomed. You would think that might have set in by now.

(The only saving grace for the Eagles' defense is that New York's kicking game is absolutely atrocious, which took three points off the board on extra points in the first half alone. As long as the offense continues to cook, those missed extra points could end up being the difference in the game, and it won't be because of anything Gannon's boys have done so far.)

With the Jets picking up 79 yards before the defense ever took the field, it was easy work for New York from there. Defending a short field did not go well for Jonathan Gannon's boys, and when Steven Nelson got beat by Elijah Moore, there was nobody there to prevent Zach Wilson from throwing an easy touchdown on the opening drive. Not exactly the start the Eagles envisioned.

• Is there a more iconic combination in the NFL than Jalen Reagor and insanely bad special teams plays? You're telling me this guy is the best option you have to return kicks and punts, in spite of the mountain of evidence that he is both braindead back there and unable to create anything special with his physical tools and instincts? I've seen scary robots in Twitter videos that can barely move who would still be more dangerous than Reagor is on special teams.

What's the opposite of a gift that keeps on giving, student loan debt? Jalen Reagor is the Eagles' equivalent of student loan debt. Even his positive return shortly before halftime was a play he made after nearly giving New York the ball back with a muffed punt.