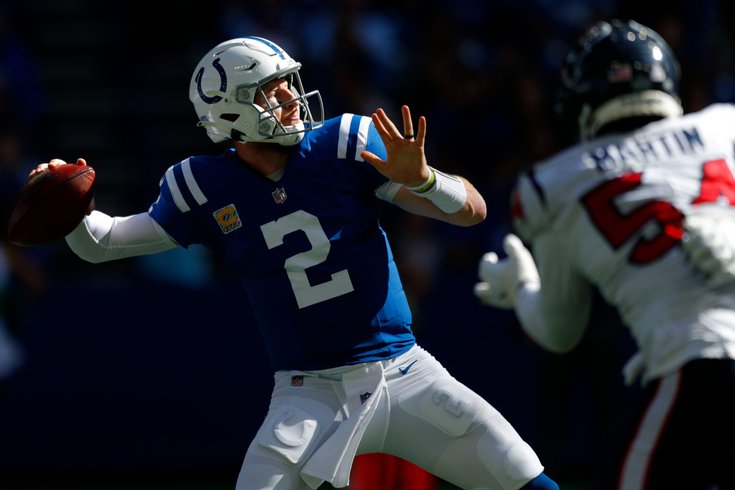 The Eagles need Carson Wentz to stay healthy for one more game.

And so, each week we'll lay out a rooting guide for non-Eagles games on the NFL schedule, and yes, I'm aware that most of the below is obvious. You can also check out the latest Week 13 odds and read all my picks, here.

When the Eagles lost to the woeful New York Giants on Sunday, it sure felt like any hopes of winning the NFC East were instantly gone. Well, maybe not?

FiveThirtyEight.com still gives the the Eagles a nine percent chance of winning the division, while the New York Times gives them a six percent chance. Those aren't great odds, obviously, but it's something.

• Cowboys at Saints: The Saints will be without RB Alvin Kamara, LT Terron Armstead, RT Ryan Ramczyk, LG Andrus Peat, DE Marcus Davenport, and DE Tanoh Kpassagnon in this game. If the Cowboys can't beat this Saints team that the Eagles very easily handled a couple weeks ago, then that would be highly alarming for their stronghold on the division.

As Deniz Selman points out, with a Cowboys loss to New Orleans, the Eagles would only need the Cowboys to lose one more divisional game to have the division be completely within their control if they ran the table.

Remember, a Dallas loss tonight to NO (a common opponent)+1 division loss in the next 3 gives #Eagles control to win NFC East (would win common opponents tiebreaker). Same is NOT true if Dallas loses to Arizona (would go to SOV tiebreaker in that case which Dallas would win). pic.twitter.com/bd0gC7Lxoq

Of course, expecting the Eagles to run the table is probably delusional, given the Birds' loss to the Giants on Sunday. Still, for one more week it's worth rooting against Dallas.

There's perhaps an argument that a Saints loss helps the Eagles' wildcard hopes. Meh. They stink. If the Eagles can't beat them out for a wildcard with the schedule they have left, they don't deserve to be in the playoffs.

The Eagles should be rooting for any team with five or more wins to lose. That would include the following games, with the ideal winners bolded:

Before we look at Sunday's games in terms of draft positioning, let's take our weekly look at Tankathon.com. 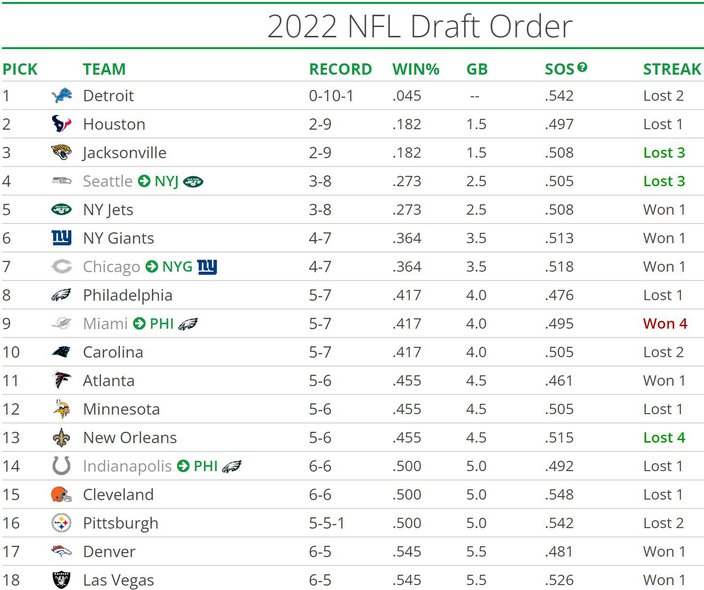 • Giants at Dolphins: As you know, the Eagles own the Dolphins' first-round pick. This game at first glance might seem debatable, since the Giants are only a game behind the Eagles in the wildcard. It's not. It's far better for the Eagles if the Dolphins lose this game, helping their draft positioning in the first round. As we noted with the Saints above, if the Eagles can't beat out this trash Giants team for a wildcard, they don't deserve to be in the playoffs.

• Colts at Texans: First and foremost, the Eagles need Carson Wentz to get through this game unscathed. If he stays healthy and plays all the Colts' snaps in this game, he will very likely reach the projected benchmark for snaps on the season that would satisfy the 75 percent requirement. If the Colts also lose, even better.

Indy is very unlikely to win the AFC South, with the Titans holding a two-game lead plus a season sweep of the Colts. However, they are very much wildcard contenders. A look at the AFC wildcard:

It's ideal for the Eagles if the teams competing with the Colts for a wildcard win their games. Of the remaining games not listed above, a lot of the wildcard contenders either play each other, or divisional leaders with tenuous holds of first place. Those games:

• Chargers at Bengals: I think this is a tough call, but I think it's better if the Bengals solidify at least one wildcard spot for the AFC North.

• Ravens at Steelers: The Ravens are 8-3, so the Colts would be unlikely to catch them. The Steelers could use a win to get back over .500.

• Broncos at Chiefs: The Chiefs are 7-4, so for the Eagles' purposes they can afford to lose a little ground to the Colts, while the Broncos could really use a win to keep pace in the wildcard race.

And then there's one last game relevant to draft positioning:

• Cardinals at Bears: The Giants own the Bears' first-round pick, which currently sits at seventh overall. Also, it would be nice for the Dolphins pick to jump the Bears pick.