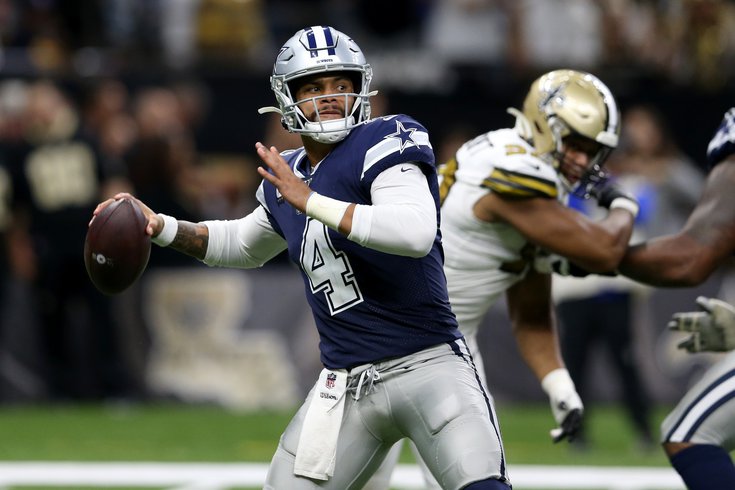 The Cowboys have hit their usual mid-to-late season lull, but should snap out of it against the Saints.

For the gambling enthusiasts, here are my Week 13 NFL picks. To note, the team logos indicate who I think will win the game, not cover the spread. At the end of the picks, I'll note a few teams that I like based on the spread — with all Week 13 lines coming via Sidelines.io.

Cowboys (-4.5) at Saints: The Saints reportedly have made the switch from Trevor Siemian to Taysom Hill at quarterback, and while Hill isn't really a legitimate starting NFL quarterback, he's at least more threatening than Siemian.

The Saints are beginning to get a little healthier, but they're still in pretty bad shape. Most notably, offensive tackles Terron Armstead and Ryan Ramczyk are both listed as questionable, but neither player practiced on Tuesday or Wednesday. Alvin Kamara's availability remains in question as well. On the defensive side of the ball, the Saints' leaders in sacks, Marcus Davenport and Tanoh Kpassagnon, are both out.

Eagles (-7) at Jets: Jalen Hurts is coming off his worst performance as a professional quarterback, and will look to turn things around against the Jets, a team with the worst point differential in the NFL.

The Jets have nothing. Offensively, Zach Wilson is statistically the worst starting quarterback in the NFL, and the Jets' leading rusher, Michael Carter, is out. Defensively, they're allowing opposing quarterbacks to have a passer rating of 107.0, the highest in the NFL, while also failing to stop the run. It's hard to see how they they've even won three games this season.

Not that this matters for Sunday's matchup, but the Eagles are 11-0 all-time against the Jets. They'll get to 12-0.

Buccaneers (-10.5) at Falcons: This time last week, the Falcons looked like one of the worst teams in the NFL. One meaningless win over the Jaguars doesn't change that.

Cardinals (-7.5) at Bears: The Cardinals are coming off their bye and should have Kyler Murray back for this game. The Bears had lost five straight before beating the Lions on Thanksgiving on a last second field goal. I didn't see one second of that game, by the way, as the Lions' slot on Thanksgiving is my new personal "Visit with your significant other's family" time of the holiday season.

Chargers at Bengals (-3): After bad losses to the Jets and Browns, the Bengals have bounced back and strung together two emphatic wins over the Raiders (32-13) and Steelers (41-10). Also, here's where I'll reiterate my belief that the Chargers remain frauds.

By the way, this is a rematch of the coldest game in NFL history:

Vikings (-7) at Lions: It's time to seriously begin wondering if the Lions will win a game this season. Here are their chances for each of their matchups the rest of the year, via ESPN's Football Power Index:

Giants at Dolphins (-4): During their current four-game winning streak, the Dolphins have had the benefit of playing teams like the Texans, Jets, and Panthers, but they also had a win over the Ravens squeezed in there as well. At a minimum, they are much better than the Giants, who are bad and banged up. I like the Dolphins at (-4) a lot even if Daniel Jones plays. If he's out and Mike Glennon has to start, it's a steal.

Colts (-9) at Texans: Jonathan Taylor should dominate against a Texans defense that can't stop the run.

Football Team at Raiders (-2.5): I was very tempted to take the Football Team here, but remembered that the mediocre teams bunched together in the AFC wildcard hunt are much better than the wildcard contenders in the NFC.

Jaguars at Rams (-13): Are the Rams good? They haven't looked it recently, but they should easily handle this crap Jaguars team.

Ravens (-4.5) at Steelers: The 5-5-1 Steelers have the second-hardest schedule remaining in the NFL, and they're 0-2-1 in their last three games, which included a tie with the Lions and a pair of losses to the Chargers and Bengals in which they gave up 41 points in each game. Their streak of seasons without a losing record is in serious jeopardy.

49ers (-3) at Seahawks: "I feel bad for the Seahawks and this miserable season they're having," said nobody outside of the Pacific Northwest.

Broncos at Chiefs (-9.5): Earlier this season, the Chiefs had one of the worst defenses in the NFL, but during their current four-game winning streak they're allowing 11.8 points per game. I think we're all still sort of waiting for their offense to pop, but in the meantime, their defense has put them in their usual spot atop the AFC West.

Patri*ts at Bills (-3): The Patri*ts are on a six-game winning streak during which they've outscored opponents 211-63, while the Bills have been erratic. I don't know if the Patri*ts have deployed a whole new bunch of cheating initiatives or what, but I'll be riding them until they they lose.