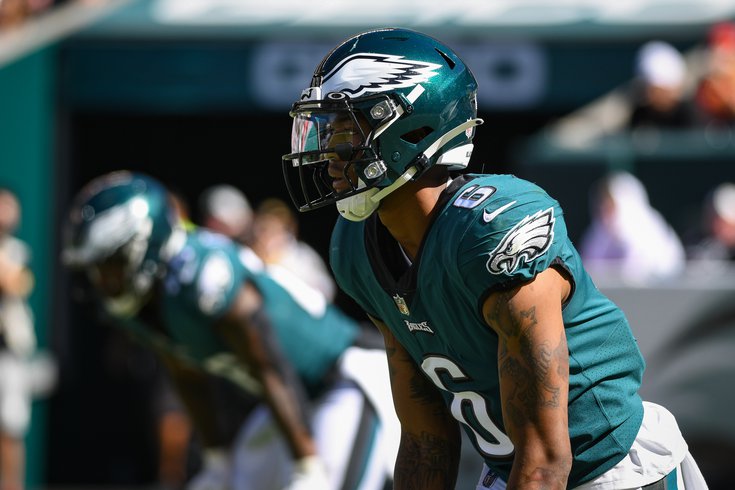 Hey, not sure if you heard, but the Eagles are running the ball.

They did it again against the Giants, they just didn’t do it enough, but they still did it. They still ran for over 200 yards, punishing another run defense. The offensive line continues to physically move opposing defenders out of the way, creating gaping holes for any back toting the ball. Even Jalen Hurts made up for his arm with some huge runs.

Then there’s the passing game.

It’s not pretty – for the most part – as we see bad throws to dropped balls to guys looking overmatched. Sure, we see some flashes through the instant talent DeVonta Smith brings to the NFL, but the Giants game proved it’s not a given that his talent alone will carry games for the Eagles. In fact, it seems to be quite the opposite.

Smith should never disappear in any football game, nor should he ever be on the short end of any target-share for WRs. Especially if that wide receiver is JALEN REAGOR! We should never see a game where the Eagles top two receivers – Smith and Dallas Goedert — combined for the same number of targets as Jalen Reagor.

If this season is truly about seeing what the team has and evaluating Hurts, then it’s clear the receiver core – and possibly TE position – needs a major overhaul. The reality is that Hurts needs more help as he continues to improve as a passer. I get there’s capital invested in some of these guys, but the Eagles can’t continue to compete in the NFL with their current crew at receiver.

Goedert and Smith are locked in, which further infuriates me that they were limited in targets this past weekend. Quez Watkins has a great blend of height and speed that make him a perfect No. 3 or 4 WR on a contender. That’s it. Plus, we see there isn’t even a consistent effort to pepper the top two guys each week.

Nobody else is good enough to take advantage of spreading the ball around, and Smith needs to be peppered like a true number one. I’m not here for any post-losses excuses about how Smith was double-covered, or Hurts justifying a throw to anyone else. The Eagles coaching staff needs to find a way to get Smith double-digit targets every single game, much like other top-tier receivers in the NFL. Be it Debo Samuel or Devante Adams — guys get covered and still find a way.

Howie Roseman may have “knocked it out of the park” with Smith, but the position needs work. The wide receivers are just not good, and we don’t need to be subjected to anymore fact-finding missions of which guy to rely on moving forward. They may be stuck with Reagor and Greg Ward for the rest of the season, but they simply can’t move forward with anyone else besides Smith and Watkins. The same goes for Goedert at the TE spot. Enough with waiting for guys to develop, as that may take longer than we have to wait on the QB developing. The timelines are off and that’s a serious problem for everyone, especially the QB.

A broken clock is right twice a day, and we appear to have those two correct times; DeVonta Smith and Dallas Goedert. Watkins is cool; he stays. But the glaring weakness of the team being the WR position hasn’t been fixed, neither was any strategy implemented to fix this moving forward. They took the best available WR on the board in a draft that had a couple of low-risk options. This wasn’t mining some top talent in the 5th round.

The Eagles need to draft a WR with a top pick and spend money on the position in the offseason. They simply cannot continue to scrape by with an occasional win in the draft, especially if Hurts is the guy moving forward.

What if he’s not? You think Aaron Rodgers, Deshaun Watson, or Russell Wilson want to throw to Greg Ward or Jalen Reagor? What planet are you on where this is an appealing core of players for any top-level QB? Either way the Philadelphia Eagles are in a terrible spot at the WR position moving forward. The arrival of a young star-to-be talent in Smith doesn’t remove the need to improve that position, it reinforces it.

The Eagles — most notably Jalen Hurts and Nick Sirianni — made a mistake. They neglected their true first round talent to force the ball to a “fake” first round talent. They neglected their top TE who they signed to an extension after trading the only other threat for targets in Ertz. It’s the most maddening part of that loss to the Giants and will be their undoing every week if it continues.

They forced the ball to Reagor, they can certainly try forcing it to Smith.

The Chiefs may be back in the playoff hunt, mainly because everyone seems to be in the hunt, but their offense is clearly not back. Denver has a great defense and struggles on offense, especially if they are down in football games. The line is ridiculous at 10 points, especially for a division rivalry, but Denver could easily be blown out in KC. The best bet here is to count on the Chiefs winning but not scoring much, a combination of their recent struggles and how well Denver’s defense plays. In their last five games the Chiefs have only gone over 20 points… once. Yes, they won four straight and four of five, but their offense is certainly not back.