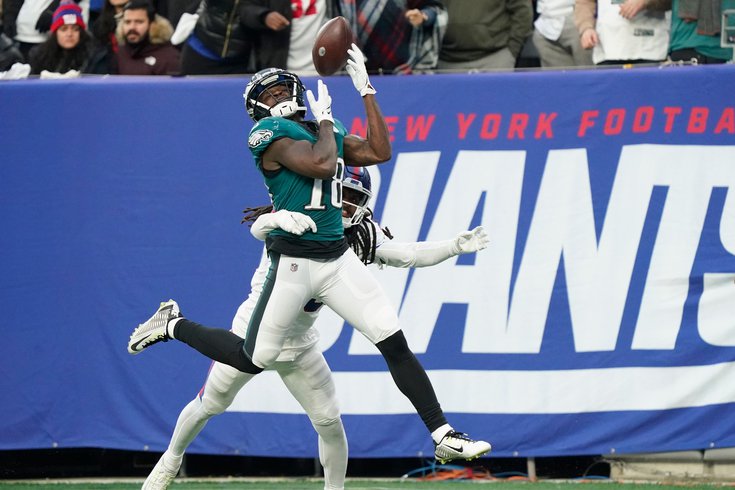 Here's where people around the country have the Eagles ranked heading into Week 13 of the 2021 regular season. Oh, and here's our version of these sellout rankings, too.

The Eagles have discovered an offensive identity since the last check-in, based largely around a dominant rushing attack. They have racked up 1,078 yards on the ground since Week 8, by far the most in the NFL. (The Colts are second with 841.) The Eagles had won three of four using that formula before a costly 13-7 loss to the Giants on Sunday in which Jalen Hurts threw a career-high three interceptions. Philadelphia's playoff chances dipped to 26% with the defeat, according to ESPN's Football Power Index. But the Eagles have the easiest closing schedule in the NFL, and they should have more good Sundays than bad to finish the regular season -- so long as they can keep the turnovers down.

#JimmySays: The Jets might be even worse than that awful Lions team the Eagles faced earlier this season, so that would at least be a start on the "more good Sundays than bad" bet.

The Eagles' momentum fluttered away in the winds of the Meadowlands. Jalen Hurts threw three interceptions, Boston Scott had a costly fumble and Jalen Reagor missed two opportunities to play hero in the final minute of a grim 13-7 loss to the Giants. Reagor let two well-placed Hurts passes clang off his hands near the goal line -- tough catches, sure, but balls that a player drafted one spot ahead of Justin Jefferson is expected to come down with. Hurts wasn't blameless: The second-year QB tried to force the action too often and threw the ball up for grabs in multiple instances, with calamitous results. The league's easiest closing schedule will help the Eagles in their push for the playoffs, but Sunday's preventable loss could haunt them.

#JimmySays: It was grim. Real grim.

Welp, SI's power rankings are now behind a paywall. While I'm sure it's some premium content on the other side, I don't think I'll be lobbying PhillyVoice to pay for a subscription.

No Eagles-specific analysis here, but the Eagles remain in "the muddled middle."

Admirable of WR Jalen Reagor to face the media music after he probably dropped two TD passes Sunday in a six-point loss. Less admirable that Philly is putting him in that position and not targeting rookie DeVonta Smith instead.

#JimmySays: I get the idea that Smith should be getting more targets than Reagor, but... the Eagles shouldn't put a wide receiver in position to catch a football? Is that what I'm reading here? That blurb probably could've used a re-write before they clicked "Publish."

The Philadelphia Eagles entered Week 12 on a nice roll. They had won three of their last four games to get back to within a game of .500 and back on the periphery of the playoff race in the NFC.

Then came Sunday's divisional tilt with the Giants, and every bit of momentum Philly had built up evaporated in a cloud of Jalen Hurts turnovers.

Hurts was a mess against the Giants, tossing three picks and finishing the game with a passer rating of 17.5. The second-year pro admitted to reporters after the game that his mistakes cost the team dearly.

"Today, I put us in a bad situation with those turnovers I had in the first half, especially going in with the opportunity to get points before halftime," Hurts said. "It's something we have to overcome and we will."

The Eagles aren't out of it, not in an NFC where the last playoff team currently sits a game under .500. But beginning next week against the Jets in the same stadium where they just crashed and burned against the Giants, they're just about fresh out of margin for more mistakes.

#JimmySays: Sadly, I actually think there is more margin for mistakes in this awful conference.

The Eagles can't play Jalen Reagor anymore. He dropped two potential touchdowns Sunday, including a fourth-down drop that went right through his hands at the goal line in the final seconds. He has 12 or fewer yards in seven of 12 games. He had a four-game stretch in which he had four catches for five yards total. And yet, he has played two-thirds of the Eagles' offensive snaps in all but two games. Why?

The resurgence of the offense came to a halt against the Giants. Jalen Hurts really struggled.