Week 13 NFL odds: Point spread, total and advice for every game, including Eagles vs. Jets 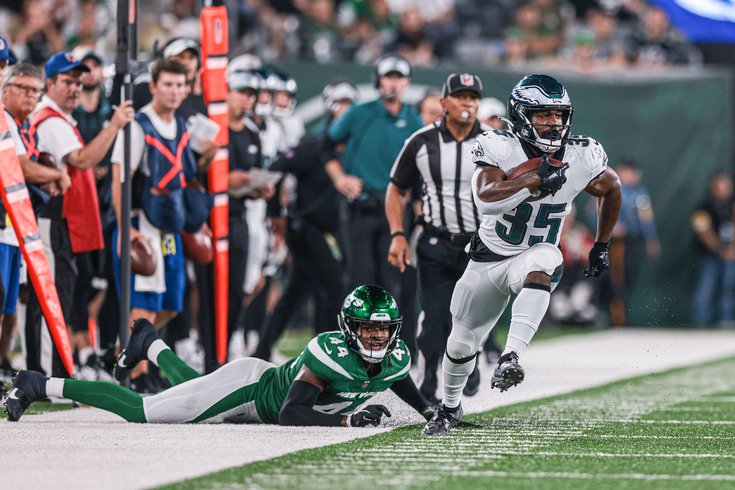 Eagles running back Boston Scott breaks a tackle by Jets linebacker Jamien Sherwood for a touchdown during this year's preseason matchup against New York.

Week 13 in the NFL provides a small sense of normalcy, as we see a couple of larger spreads return to the fold. After week 12 provided one of the sharpest weeks with point spreads that we’ve seen all season, the schedule provides a nice opportunity for bettors to strike on larger point spreads. With the playoff picture becoming a little clearer, we see some divisional matchups with huge spreads – like the Bucs in Atlanta, and the Broncos in Kansas City.

The Chiefs and Cardinals return from their bye, as the Packers, Panthers, Browns, and Titans all tag out for the week. Thursday Night Football has an interesting twist as neither the Cowboys nor Saints come off a short week, as both played on Thanksgiving. Week 12 provided just one true upset, that also coming on Thanksgiving at the expense of Dallas.

We will see if this week can provide a couple of bigger upsets as there’s plenty of opportunities with larger numbers. Let’s examine the early lines for week 13 including the Eagles vs. Jets game at MetLife Stadium.

Both teams are coming off Thanksgiving losses but only one team is truly poised to bounce back. There’s no short week here for either team, but we should see the Cowboys take advantage of a reeling Saints team. Alvin Kamara coming back doesn’t change how bad the Saints are at QB. The Cowboys are recently struggling with covering lines – just 1-3 against the spread in their last four. Dallas is 8-3 ATS on the year. If only the Saints had an offense…

Another manageable line as we continue the theme of road favorites. The Eagles suffered a difficult loss to the Giants, and the Jets beat the Texans. That’s the only reason why this line is less than the key number 7. The “true line” – or a line that better represents the difference in talent – is closer to 8.5 points. The Birds are just 6-6 ATS but they go up against a Jets team that is even worse, 3-8 ATS on the season.

Carson Wentz and the Colts offense found a way to get up on the Bucs, only to see Tampa stick a dagger in them with 20 seconds left on the clock. Meanwhile, the Texans lost to the Jets. The Texans lost to the JETS. This line is ridiculous for a 6-6 team to be laying nearly 10 points, on the road, against a division opponent. But the Texans have dropped nine of ten and couldn’t cover a 12-point spread when Indy blew them out 31-3 in Week 6.

Tampa comes off a win where they put up 38 points – with Leonard Fournette accounting for 30 total points. The Falcons controlled a game that was never in doubt against the Jags, as Cordarelle Patterson dominated for Atlanta. The Falcons offense was non-existent the past two weeks, with just three total points coming in two losses. This line is huge for an in-division matchup, and the Bucs are 1-6 ATS in their last seven games as road favorites.

The Bengals had one of the most impressive wins last week – destroying the Steelers through the air and on the ground. The Chargers suffered a horrible division loss to the Broncos. Justin Herbert and the Chargers offense have way too much talent to be 6-6, but Cincinnati is playing much better football. While the Bengals are only 6-5 ATS on the year, they’ve covered four of their last six games.

This game is all about the quarterbacks, and who is healthy enough to play. The Cardinals do expect Kyler Murray back – as the whole team returns from the bye week – and the Bears are balancing Justin Fields with Andy Dalton. If Murray is a go, it shouldn’t matter who plays for Chicago as Arizona needs this game to stay in the driver’s seat for the top seed in the NFC. Arizona is 8-3 ATS compared to Chicago, who is just 4-7 ATS on the year.

The Vikings may not have lost Dalvin Cook for the rest of the season, but he will be out for this game against the Lions. Cook’s absence is enough to dip the line a point or two, but not change the fortune of the Lions for the better. The Vikings are starting to slip following a loss to the Niners, and the Lions have fought all year. Detroit is winless but 7-4 ATS on the year.

This is the lowest total on the board this week, mainly because of how bad the Giants looked last week. Don’t blame Miami – they’ve won four straight and scored at least 21 points in three of those games. Things have certainly changed for Eagles fans in this matchup – the Giants losing helps the Eagles playoff chances, but Miami losing helps improve the draft pick. New York is just 1-5 straight up in their last six on the road.

The Raiders come off a wild upset of the Cowboys last Thursday night – stunning the betting world as they won outright as a 7.5-point road dog. The WFT survived a low-scoring bout against the Seahawks, effectively ending anything positive for Seattle this year. Washington has covered three straight games – all wins – and enters this game as the final wild card in the NFC.

This is the largest spread of the week, and it makes sense looking at last weekend’s results. The Rams didn’t have enough ammo to keep up with the Packers in a shootout, and the Jags saw the Falcons control nearly every aspect of their game. The Rams are at home which helps mitigate the “letdown” factor in going up against a bad team. If you’re thinking the line may be too large for the Rams to cover, you may be right. L.A. has failed to cover the spread in five straight games – including double-digit lines against the Lions and Texans.

It’s not often we see a QB throw four interceptions and still win a football game, but Lamar Jackson has pulled his team out of some rather large holes this season. The Steelers desperately need this game to stay above the Browns at the bottom of their division. Pittsburgh is just 4-7 ATS on the year, and 1-6 ATS in their last seven home games. The Ravens have the third best rushing offense and the second best rush defense in the NFL.

Seattle is cooked. Their offense is atrocious, and Russell Wilson looks awful. They were handled by Washington while the Niners took care of the Vikings in San Francisco. The Niners are just 5-6 ATS this year but have covered three straight games. Seattle can’t do much right at all, but they are 5-5 ATS. It’s worth noting the total sits at 46.5 points and the under is 10-1 for Seattle this season.

The last time Denver was a 10-point road underdog they went to Dallas and won outright. The Broncos are coming off a big win against the Chargers, while the Chiefs took the week off after beating the Cowboys in Week 11. Kansas City won four straight but the offense is hardly back – they only scored more than 20 points in one of those wins. The Chiefs have won 11 straight against the Broncos, but the road team has covered six of seven in this series.

The Bills seem to be fine after a mid-season scare, but it’s the Patriots who may be the hottest team right now in the league. Not only are these teams covering spreads, they're also destroying teams when they do cover. For example, New England is 8-4 ATS but their margin of victory – or MOV — when covering is 12.4 points. The Bills are just 6-4-1 ATS but have a MOV of 13.1 points. This game will be the best barometer for who wins the AFC East.