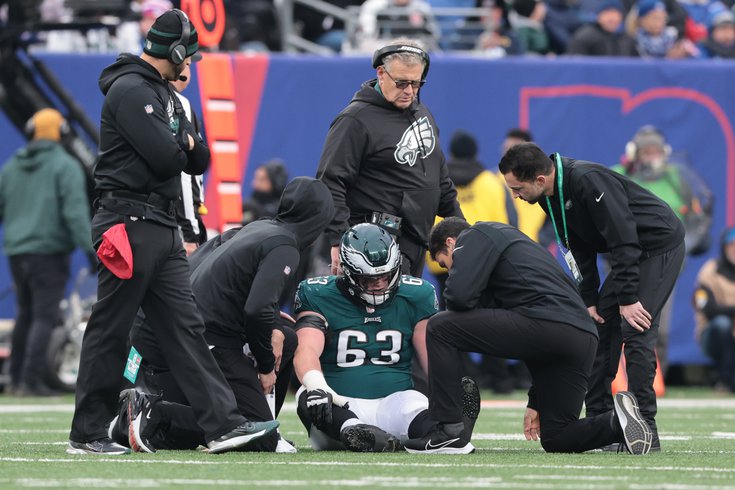 Philadelphia Eagles offensive lineman Jack Driscoll was carted off the field on Sunday against the New York Giants, and was almost immediately ruled out by the team for the rest of the game. On Monday, Nick Sirianni said that Driscoll suffered a high ankle sprain, and is heading to injured reserve.

Driscoll showed promise as a rookie in 2020, and he has been a valuable player for the Eagles this season, initially filling in for Lane Johnson at RT, and later at RG in relief of Brandon Brooks. He has played 512 snaps this season, and has looked like a capable starter.

However, he is compiling a concerning injury history, given his two stints on injured reserve this year, and an assortment of injuries as a rookie, including an MCL injury that ended his 2020 season.

The Eagles now have a hole at RG. When asked about whether or not Brandon Brooks would be able to return anytime soon, Sirinni responded that the team won't have any updates on Brooks until after the bye week, which will be Week 14, after the Eagles' Week 13 matchup this Sunday against the New York Jets.

When Brooks was originally injured Week 2 against the San Francisco 49ers, it was categorized as "only" a pec strain, as opposed to a tear. He was certain to miss substantial time, but it was not thought to be a season-ending injury. During an interview session near the time of the injury, Brooks' friend and line mate (though not his doctor) Lane Johnson volunteered that it would be an 8 week injury, however, we are now 10 weeks removed from Week 2.

On Sunday, after Driscoll went down, Nate Herbig filled in at RG. Sirianni declined to say what the offensive line configuration would look like Week 13.