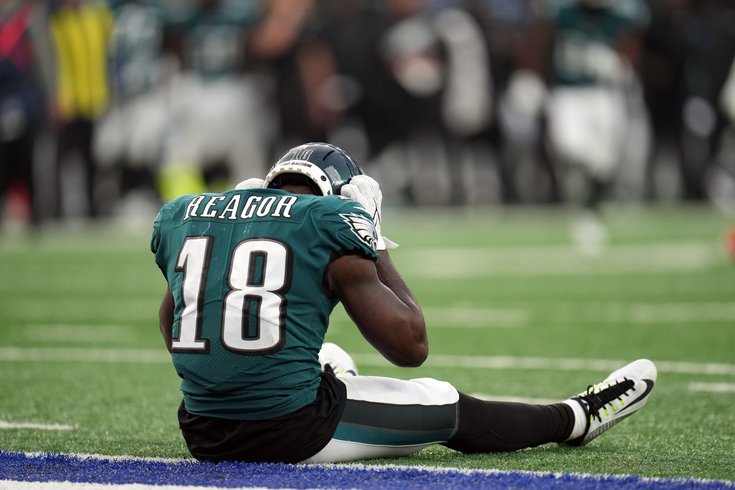 Philadelphia Eagles wide receiver Jalen Reagor reacts after dropping a pass in the endzone late in the fourth quarter.

Perhaps high on tryptophan, the Philadelphia Eagles sleepwalked through a 13-7 loss in their Week 12 Thanksgiving weekend matchup with the trash New York Giants. As always, win, lose, or tie, we hand out 10 awards.

Over the years, we've seen Eagles receivers suffer game-wrecking drops, like Riley Cooper in the playoffs against the Saints, Nelson Agholor against the Falcons, or J.J. Arcega-Whiteside against the Lions.

Reagor took it to a new level on Sunday, when he dropped TWO potential game-winning touchdowns. On the first one, at least he had a defender draped all over him. On the second one, I mean holy crap, catch the freaking ball.

Reagor had two catches for 31 yards against the Giants, which was actually his third-most productive game of the season. There will be no shortage of fans who think Reagor should just be cut. Spoiler: That's not happening. But it's probably time to sit him down, at least for a game or two.

Hurts was 14 of 31 for 129 yards, 0 TDs, 3 INTs, and a QB rating of 17.5. It was easily the worst game of his professional career. As a runner, he gobbled up 77 yards on eight carries, but he was inaccurate, indecisive, and ineffective all day as a passer. If he ultimately isn't the Eagles' guy in 2022 and beyond (there are six games left to help decide that, of course), we may be looking back at this performance as a big reason why.

Asked about Hurts' performance, Nick Sirianni said, “Anytime you turn the ball over three times, it’s not going to be an A, B, C, or D.”

3) The 'Shades of San Francisco' Award 0️⃣: The Eagles' points-less drive at the end of the first half

Remember Week 2 against the San Francisco 49ers when Hurts found Quez Watkins for a 91-yard pass in the second quarter, eventually setting up the Eagles with 1st and Goal from the 1, and they ended up with zero points? Well, they lost that game by 6 points.

Against the Giants, they had 1st and Goal from the 2. After a Greg Ward dropped TD, followed by a QB draw that everyone saw coming, Hurts made perhaps his worst decision of the season, when he tried to force a pass through a mess of Giants bodies instead of throwing the ball away.

Heading to halftime with a PICK!

The Eagles lost by 6 again.

Speaking of Scott, despite how badly the offense played all day, the Eagles had a chance to take the lead and win the game late. But...

After three straight defensive stops, the Eagles got another chance to win it, but, you know, Reagor.

Both Sirianni and Hurts said that the Giants simply played their defense like they normally do, and didn't go out of their way to take Smith or Goedert out of the game.

And yet, even though Smith and Goedert are by far the Eagles' two best weapons in the passing game, they got a combined seven targets on 31 pass attempts. Smith had four and Goedert had three. Reagor had seven targets on his own for some insane reason, while Quez Watkins had 5, and Kenny Gainwell had four.

Smith was rightfully angry after the final play, when he got wide open well before Hurts' heave to Reagor.

Smith threw his helmet in frustration after the play.

The Eagles ran the ball well again, like they have in each of their last four games, as they racked up 208 yards on the ground. They ran it effectively even when the Giants knew it was coming.

Whenever Sirianni got away from the run, however, drives stalled and the Eagles either turned it over or punted. They could have run for over 300 yards in this game, and, you know, won.

The Eagles lost the turnover battle 4-0, and the defense still only gave up 13 points. They gave up zero points off of those four turnovers, somehow. You can nitpick the pass rush not getting to Daniel Jones as much as would be ideal, or their inability to create turnovers on their own, but the defense more than did their part in this game to pick up a win.

Congrats, Joe. You got your revenge. 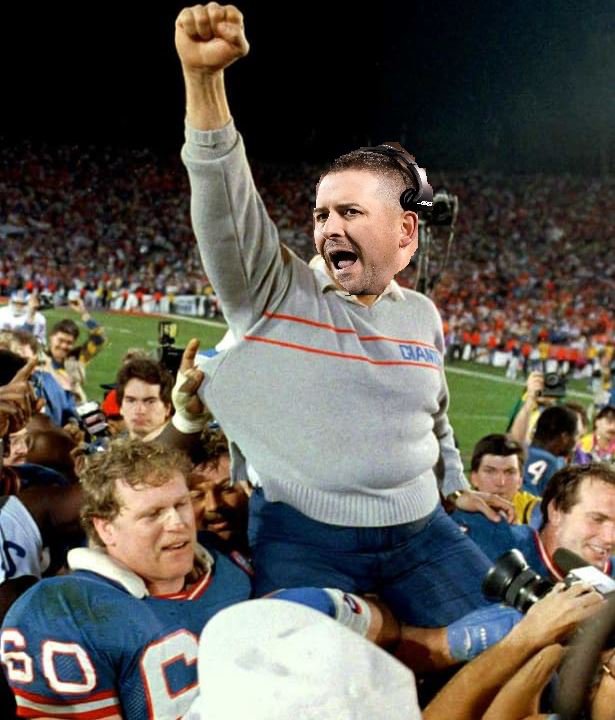 9) The Award For Excellence in the Field of Ruining Fun 🚫🎉: The Eagles

The Eagles had much to be thankful for on Thanksgiving, as all three outcomes that day were favorable to them. In the early game, the Bears beat the Lions, which moved the Dolphins pick (owned by the Eagles, of course) up in the draft order ahead of Chicago. In the late afternoon game, the Cowboys lost to the Raiders, giving the Eagles some hope that they can compete for an NFC East title. In the night game, the Saints lost to the Bills, moving the Eagles ahead of New Orleans in the wildcard pecking order.

Vibes were good, and the Eagles were even maybe looking like legitimate threats to overtake the Cowboys for the divisional crown.

The Eagles can still compete for a wildcard. When this week's slate of games is complete, assuming the Vikings-Niners game doesn't end in a tie, the Eagles will still only be 0.5 games back of whoever is the placeholder of the 7 seed in the NFC.

So, sure, hope remains, I guess. But today was a reminder that this team still just isn't very good.