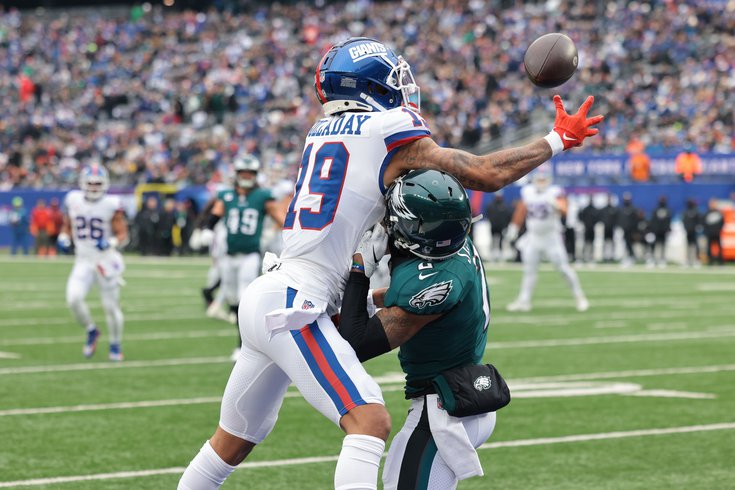 The Eagles didn't get going on offense until the first half was mostly over, and they're locked in a 3-0 struggle with the Giants as a result.

• The Giants were the first team to put points on the board in Sunday's game, but Philly's defense looked good out of the chute, hamstrung by some missed holding calls that would have allowed them to get into the backfield for sacks or stops for losses. As it was, they still managed to put a lot of pressure on quarterback Daniel Jones early in this game, whose gains on the ground likely won't be sustainable the deeper we get into this game.

Even with Jones picking up critical yards with his legs, the Giants showed almost no ability to pick up chunk yards, nickel-and-diming the Eagles on their first scoring drive across 13 plays only to ultimately end up with a field goal for all their hard work. Although the pass rush came and went for the Eagles — Fletcher Cox got knocked on his butt on one play early in the second quarter — they were able to buckle down when they needed to.

Maybe you could argue that Darius Slay was fortunate not to draw a pass interference penalty on his critical third-down break-up midway through the first quarter, but I think the officials did the right thing allowing them to play on. Kenny Golladay and Slay were grappling back and forth down the sideline, and there was a legitimate effort from Slay to turn around and play the ball. The Eagles defense came within inches of a highlight-reel play in the second quarter, as Avonte Maddox ran out of real estate on a juggling interception attempt that nonetheless ended the Giants' scoring threat.

One thing that has felt heartening in recent weeks is the increase in plays made by guys in the secondary, even if they have come against worse quarterbacks who give them more chances to make it happen. For most of the year, this group has been wholly reliant on the pass rush to manufacture plays (as evidenced by the insane completion percentage numbers QBs have put up against Philly), but the boys on the back end are increasingly pulling their weight. Maddox and Slay have been all around the ball in big spots, leading by example in the secondary.

The defense did their job in the opening half. They'll need to hold onto the rope in the second half.

• It took the Eagles a while to actually get rolling on the ground in this one, but once they turned Jalen Hurts loose as a pure runner instead of trying to win through the air, the Eagles finally started to look like the team they've evolved into over the last month. New York looked ill-equipped to find the most important threat on run-pass options. Hurts not only killed the Giants with his legs when given the opportunity, he did an excellent job of disguising what the Eagles were doing and drawing attention toward himself when the ball was going elsewhere, which should have resulted in a Boston Scott touchdown late in the half if not for a penalty.

More of that in the second half and the Eagles will probably figure out a way to put this one away.

• How about JJ Arcega-Whiteside coming up with first-down receptions in back-to-back weeks? The bar has been set impossibly low for the former second-round pick, but hey, at least he's contributing in some way.

• The offensive highlight of the first half was Quez Watkins' excellent grab down the sideline late in the first quarter, a drive-extending play and the biggest grab Watkins has had in recent weeks:

Credit to Hurts for his contributions on the play — rather than bailing out of the pocket, he hung in there long enough to deliver this one in a place where only Watkins had a play on the ball.

• If you tuned into this game hoping to watch good offense, you had to have been disappointed in Philadelphia's first series. The Eagles got stonewalled on an outside run on first down, Jalen Hurts sailed a pass on second down, and against a three-man rush on third-down, Hurts bailed on the pocket early, running right into New York's drop eight and ending the drive with a quick three-and-out. Even if he had hung in there, left tackle Jordan Mailata got beat pretty badly around the left side of the line, so it might have been an unsuccessful play regardless.

It didn't get a whole lot better for the Eagles from there, partially because Hurts did not look good in the early stages of the game. Relying on Hurts to beat the Giants through the air did not go well for Philadelphia, even if we throw out the interception Hurts threw as a result of a hold of Watkins earlier in the play:

(Unfortunately, Fox only hinted at the hold on Watkins verbally without ever showing a replay of the interception that might help the audience out with such a problem. I'm not sure how sports broadcasts have gotten worse as technology has gotten considerably better, but maybe someone will figure out that showing important plays is basically the entire point of the instant replay feature.)

Prior to that throw, Hurts' accuracy left a lot to be desired, with DeVonta Smith coming out of a play looking confused after Hurts missed him by about five yards. Even a completion to Smith over the middle one play later required Smith to bail out Hurts' poor accuracy, as Smith reached back to haul in a ball in traffic instead of catching it with a chance to create yards after the catch. Was he hampered by pressure? Sure. But he also didn't help himself with the decisions he made in the face of that pressure, struggling to climb the ladder to give himself chances to make plays when the Giants blitzed.

The inexcusable play was Hurts' interception to close the half, which simply can't happen in any circumstance. That drive should have been a guaranteed three points, and Hurts quite literally gave points away instead of getting rid of the ball and preserving the field goal attempt.

• Alternatively, the Eagles could also try running the ball more instead of asking Hurts to win this game through the air. Late in the first half, the Eagles began to find their footing on the ground, using the Miles Sanders/Boston Scott combination to eat up yards and clock in their final drive of the half. And Hurts was the guy making the most explosive plays on the ground, exploding through huge holes in the Giants' front seven and taking advantage of New York's uncertainty on RPOs. We have seen this movie before, and an attack built around Hurts and his backfield mates running the ball works pretty damn well for Philly.

On the other hand, the Eagles had their fair share of struggles on the ground, too, so we'll see if simply pounding the rock is the magic elixir in the second half. Running it in the final few minutes with the Giants trying to keep everything in front of them might not be indicative of where things go in the second half.

• I'm not sure why Greg Ward is so prominently involved in Philadelphia's red-zone packages, but they should probably reconsider that choice. That's basically the only time we're seeing him these days, and Ward is doing nothing with the opportunities.

• Jason Kelce is an indispensable piece of this Eagles offensive line, and they will be in trouble if the knee injury he picked up early in Sunday's game is at all serious. And it seems that way based on the early returns — Kelce came out of the locker room to test the knee before the Eagles began a series in the second quarter but Philadelphia's starting center was visibly in pain on the sideline and unable to go back into the game. He's a tough SOB, so the knee must really be bothering him.

And there have already been consequences as a result of Kelce's absence. Two big plays for the Eagles were wiped out in their final drive of the half, both on Nate Herbig (Kelce's replacement) holding calls. The second wiped out a terrific touchdown run from Boston Scott.

• Honestly I just kind of feel bad for Jalen Reagor at this point. Even when he has some room to work on punt returns, he manages to turn it into minimal gains. Reagor doesn't make guys miss, doesn't make good decisions on fair catches, and rarely flashes the speed he was supposed to showcase in these situations. But other than that, Mrs. Lincoln, the play has been great.

(His lack of production would probably be less annoying if his brand wasn't built around dumb shit like proving the doubters wrong and "grinding" or whatever. He's an easy target.)

• I think Stevie Wonder may have been in charge of spotting the ball in the first half. There were some brutal placements on plays around the sticks.