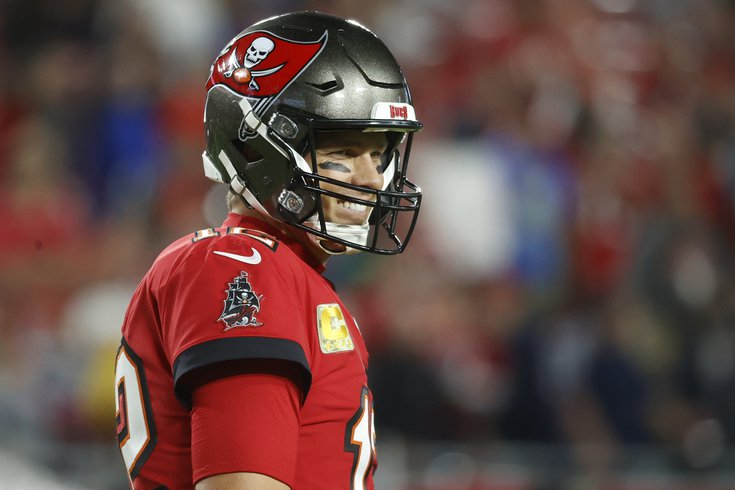 Eagles fans will have to suck it up and root for Tom Brady on Sunday.

And so, each week we'll lay out a rooting guide for non-Eagles games on the NFL schedule, and yes, I'm aware that most of the below is obvious. You can also check out the latest Week 12 odds and read all my picks, here.

The Eagles had much to be thankful for on Thanksgiving, as all three outcomes were favorable to them. In the early game, the Bears beat the Lions, which moved the Dolphins pick (owned by the Eagles, of course) up in the draft order ahead of Chicago. In the late afternoon game, the Cowboys lost to the Raiders, giving the Eagles some hope that they can compete for an NFC East title. In the night game, the Saints lost to the Bills, moving the Eagles ahead of New Orleans in the wildcard pecking order.

Before we look at Sunday's games, let's take our weekly look at Tankathon.com. 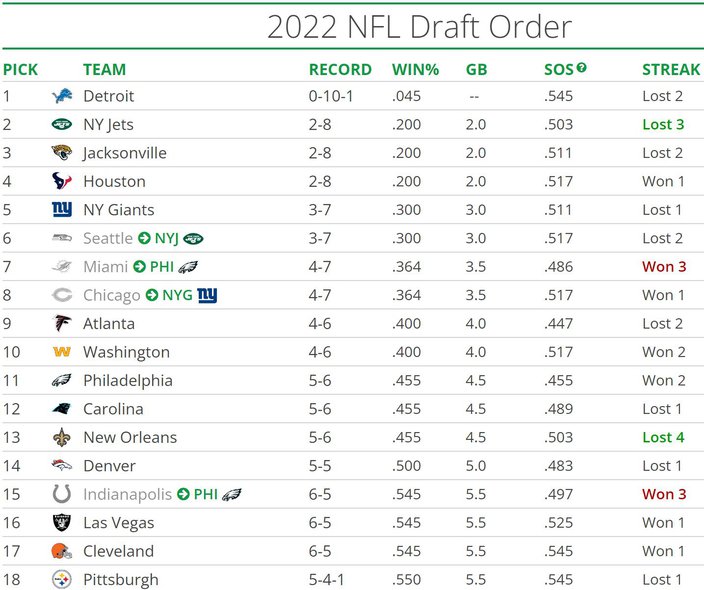 • Panthers at Dolphins: Like the Eagles, the Panthers are 5-6, and thus a wildcard contender, in theory. However, if you've watched them this season, you know they're just not very good, and the Eagles have a head-to-head tiebreaker over them. It's the better outcome if the Dolphins lose and help the Eagles' draft positioning.

• Buccaneers at Colts: There are no worries at all the rest of the season of the Colts benching Carson Wentz to preserve a first round pick, so go ahead and root against them, full blast.

• Titans at Patri*ts: The Titans have a two-game lead over the Colts, plus a head-to-head sweep of them this season, but it would still be nice to see them wrap up the AFC South.

For the rest of the matchups, let's first show the AFC wildcard race:

• Chargers at Broncos: The Chargers are a better bet than the Broncos to earn a wildcard berth over the Colts.

MORE: Five over/unders for Eagles' Week 12 matchup vs. the Giants | Week 12 NFL picks: Rounding up the experts' predictions for Eagles vs. Giants | Mailbag: Might the Eagles extend Hurts' 'tryout' by another year?

• Browns at Ravens: The Ravens are very likely to win the AFC North, while the Browns are in competition with the Colts for a wildcard.

• Steelers at Bengals: Both the Steelers and Bengals are in competition with the Colts for a wildcard. I don't have a strong opinion of which team is the more ideal winner.

• Jets at Texans: I guess there's a chance one of these teams could end up with a better record than the Dolphins, but that feels doubtful.

First, let's acknowledge that there's a legitimate debate to be had whether the Eagles are better served not making the playoffs. Here we'll base our ideal winners on a playoff berth being a good thing.

A look at the Eagles' place in the NFC wildcard race:

The Eagles will be rooting for pretty much any team ahead of them — as well as the cluster of six-loss teams — to lose.

• Vikings at 49ers: The Niners own a head-to-head tiebreaker over the Eagles, so it's ideal if they lose. To note, the Vikings will be tough to win a tiebreaker over as well because they have a 4-2 conference record.

• Falcons at Jaguars: The Falcons stink and in my opinion aren't a threat to make the playoffs, but they are still just kind of sitting there, just one game back at 4-6. It's probably best if they just get cleared out of the way completely.

• Rams at Packers: If the Cowboys win the NFC East, petty Eagles fans will want to see them have as early an exit from the playoffs as possible, and their road to a Super Bowl will be much tougher as the 4 seed, since they would get the best wildcard team in the first round, which would likely be the Rams. It's probably best if the Packers (8-3) extend their lead over the Cowboys (7-4) in the seeding order.