Mailbag: Might the Eagles extend Jalen Hurts' 'tryout' by another year? 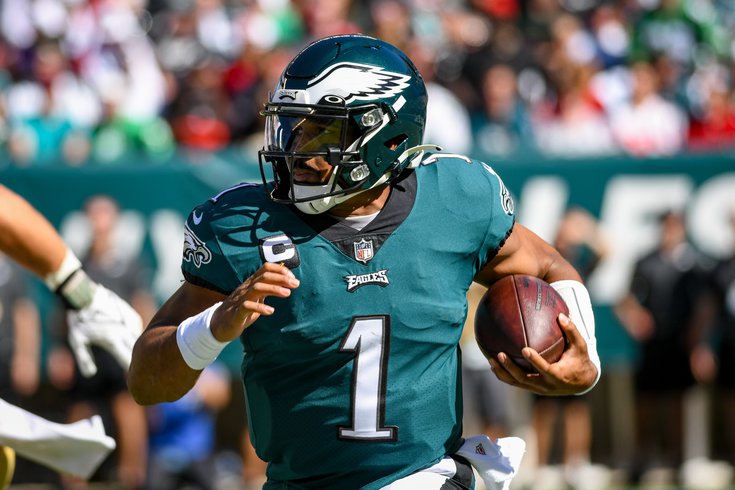 Question from Pete: I'm thinking back to the 2019 49ers and I say, hey if the 49ers could get to a Super Bowl with a rushing attack as their primary offense why can't the Eagles do the same with Hurts (who I think is better than Jimmy G, although that's not saying a lot). They lost, but mainly due to a highly overrated coach who decided to throw the ball in the 4th quarter. Am I wrong for thinking the Eagles should ride out Jalen Hurts for 2022 and see what happens? Can he ever develop into a top 10 or 15 QB? I feel like something is there with Hurts. Please talk some sense into me.

I'm with you that the Eagles' 2021 offense is on a similar level as the Niners' 2019 offense, however, the difference between that 49ers team and this Eagles team is that San Francisco had a dominant defense. The Eagles do not.

I do think that Hurts is helping his cause in becoming the team's starter in 2022, because of a number of factors:

Hurts will only be the starter in 2022 if the Eagles' brass is willing to stick to the offensive formula that is working right now. If they're dead set on building a team around an aerial attack, they're going to be QB shopping, whether that's next offseason or in 2023. But it is beginning to feel like Hurts could extend his "tryout," so to speak, by another year.

Question from Secret Agent Randy Beans: Based on what we've seen from this team the past couple weeks, what are your thoughts on this ranking of the Eagles' biggest non-QB needs this offseason:

Question from Pounder: What will the Eagles do with Reagor? He has to go to the bench in favor of Greg Ward, right?

No, he doesn't have to. I imagine the Eagles will keep putting Reagor out there, because he was a first-round pick.

Is Ward better than Reagor right now? Sure. While he's not a threat either down the field or after he has the ball in his hands, Ward can at least run NFL routes and make first-down grabs on occasion, which is better than the nothingness they're getting out of Reagor.

Question from Joe: Will Reagor continue to return punts and kickoffs? He seems not good at that too.

He's at least fielding punts well enough, so he's just as good in that area as Ward, who would be his replacement. If you subbed in a different kick returner, it would probably either be Quez Watkins, who wasn't super effective back there earlier this season, or Jason Huntley, who would cost you a game day roster spot. I wouldn't mind seeing what Huntley could do.

Question from 89Tremaine: Which pending free agent WR would fit best with the Eagles long-term?

Williams would give the Eagles the bigger receiver they lack, and he can make plays down the field, so you sort of kill two birds with one stone with him. However, I think the Chargers would slap the franchise tag on him before they'd let him walk in free agency. He's on pace for 1200 yards and 12 TDs.

Gallup is an interesting option as a downfield threat. The Cowboys likely won't be able to afford him, with Amari Cooper already getting paid, and a huge Ceedee Lamb contract on the horizon.

Robinson will be in his ninth year next season, so he's got some mileage on him, even if he'll still only turn 29 next August. I've always liked his game, but give me an ascending player in free agency for a change.

Question from Hinkie: I've seen you mention that you think Brooks is gone after this year, which makes sense. However, I thought his contract prevented that possibility, or at least made it very difficult. Didn't they extend him fairly recently and push money into further years?

Like many of their aging vets, yeah, it'll be a tough pill to swallow whenever they pay the price for kicking the can down the road. If they just outright released Brooks next offseason, it would be a dead money hit of $15,736,472, with $3,702,763 in savings. However, I could see the Eagles doing something similar to what they did with Alshon Jeffery and Malik Jackson this past offseason, where they tweak Brooks' contract, and release him with a June 1 designation, which would delay some of the dead money burden until 2023.

Question from ConánC: Should Jake Elliott make the Pro Bowl?

He had his worst season as a pro last year, but he has really bounced back nicely.

Question from Mig: Obligatory weekly question until the end of the season. What percentage would you give the Eagles of winning the rest of their games (If Dallas doesn't play starters in week 18)?

Still pretty low. Like, five percent? Something like that. I look forward to checking in again next week, if the Eagles win.

It's beginning to look like the Cowboys won't be resting starters in that Week 18 game, by the way. Even if they have the division wrapped up, they might still be jockeying for a better seed. You do not want to have the 4 seed this year in the NFC, because that means you're either getting the Cardinals or Rams in the first round.

Question from greenwithenvy: Nerf gun to your head: Which two teams do you have in the Super Bowl this year?

At the beginning of the year, I had Chiefs over Packers, so I'll ride that out.