Eagles vs. Giants: Predictions, betting odds and more for Week 12 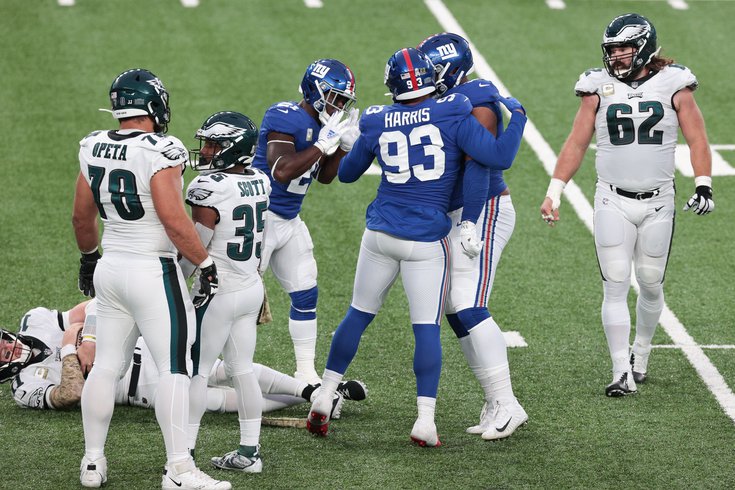 The Eagles are bad. #Analysis

The Eagles are about to open the stretch of games that fans have been clamoring for all season long.

After facing juggernauts like the Chiefs, Chargers and Buccaneers earlier this season — and having to deal with middle of the road teams like the Raiders, 49ers, Broncos and Saints — the Eagles finally get the teams that suck.

Sunday's matchup in North Jersey is the first of five games against teams with losing records. The Giants have been pretty bad this season, whether injuries or bad coaching or a tough schedule is the culprit, Philly is and should be favored in this one as Daniel Jones hopes to get things back on track.

Will they have (a very weird form of) revenge on their minds, as they look to beat the Eagles — who may or may not have tanked in Week 17 last season allowing Washington to beat out New York for a playoff berth? Will they prove to be a threat for the Eagles renewed love for power football, running the ball all over their opponents as they have for the last four or five weeks?

We'll find out on Sunday. In the meantime, here's a look at how our writers see this Eagles vs. Giants matchup playing out...

Joe Judge wants this game so badly that he waited until this week to fire offensive coordinator Jason Garrett. Doesn't matter. They could clone Bill Walsh, and even he still wouldn't have a way of hiding the Giants' atrocious offensive line.

The Giants don't have much that scares me and they really should be bigger dogs than just 3.5 points. Their QB turns it over, their skill players can't stay healthy, they have no coherent offensive scheme, their stud running back has had knee issues and no offensive line to ruin behind, the defense is bleh.

The Eagles have plenty of faults, but I don't think you'll see too many of their warts come out in this one. The Birds should have this well in hand before some garbage time Giants stats in the fourth quarter. Take the Eagles here to cover.

Who would’ve thought back in August that, at any point this year, the Eagles would be going for a third straight win — with the possibility of a fourth next week — as they prepare to face both New York teams in back-to-back weeks before the bye? Certainly not me. But here we are, with the Eagles a road favorite against the 3-7 Giants, who are coming off a short week and just fired their offensive coordinator.

This is a game the Eagles absolutely should win, as they’ve made a living dominating in the trenches in recent weeks. On the offensive side, that’s not only opened up the running game and turned this team into one of the NFL’s top rushing attacks, but it’s also given Jalen Hurts time to sit in the pocket and make throws when he needs to, something he’s done a lot better job of bailing early on too many plays previously this season. On the defensive side of the ball, it’s allowed them to get after the quarterback and make big plays off turnovers.

And now, they face the Giants with a chance to get to .500 on the season and pick up their sixth win, which means it’s probably about time I apologize for massively underselling this team in the beginning of the year. I predicted them to win just six games. I now think they’re going to have that many by Sunday night. And with the schedule in front of them, who knows how many they have by the time the season ends. Will it be enough to get in the playoffs? With so many teams jockeying for the wild card spots, we’ll see. But if they continue playing this way, whether they get in or not, it will be hard not to call this season a success.

The Giants are 3-7 for a reason. Their quarterback is young and mostly bad, they're below average in almost every category on both sides of the ball, and even the guys who are supposed to be difference makers look bad because New York has done a horrible job of building in the trenches.

Firing Jason Garrett might have had a bigger impact on their offense if his replacement was someone other than Freddie Kitchens, but at best they're hoping for a change in voice to paper over a lot of glaring issues. Not the sort of team I'd want to put my money on right now, and I'd expect the Eagles to beat another bad team.

It's a simple matter of one team coming together heading in one direction and another still trying to find a direction on offense.

The Eagles are surging and the Giants are flailing. It’s that simple. The Eagles have a game plan for beating bad teams and so far it’s worked down to the play. Once the Eagles establish a lead it becomes difficult for bad quarterbacks to comeback against the Birds. The Eagles run downhill and down your throat - adding one of the most difficult matchups in the game with Jalen Hurts. What are the Giants going to do? Run all over the Eagles with Saquon Barkley? The Giants just fired their offensive coordinator and got blown out by the Bucs. If there ever was a time to double your kid’s college savings, this is the game.

Things have been coming up Eagles over the past few weeks with both Denver and New Orleans extremely banged-up. This week it's back into the NFC East and the dysfunction of the New York Giants, who decided to go the scapegoat route and fire offensive coordinator Jason Garrett after an ugly offensive performance on "Monday Night Football" against Tampa Bay. What that accomplishes on a short week is anyone's guess but former Cleveland coach Freddie Kitchens is expected to take over the play-calling in an effort to fairly evaluate what's going on with Daniel Jones at quarterback. It could be Garrett, Kitchens, or Bill Walsh calling the plays and nothing is going to change without improved offensive line play by the Giants.

Defensively, New York has been playing too much zone in general but that should actually help against Jalen Hurts because the Eagles' second-year QB can gash you in the run if you turn your back as a defender. Whether Philadelphia can sustain its recent running game remains to be seen but Nick Sirianni's offense will deliver enough explosive plays to make sure the Giants can't match it.

New York just made things even easier for a suddenly streaking Eagles team which should climb back to .500 by Sunday afternoon.