Eytan Shander: Let's give thanks... for Jalen Hurts 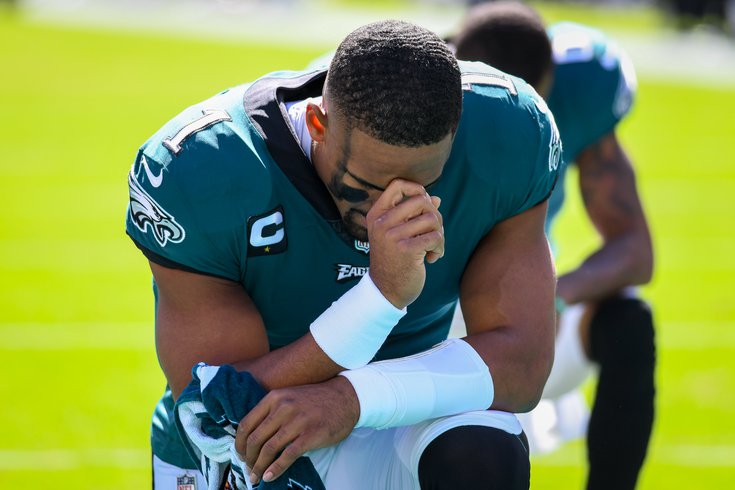 PHILADELPHIA - SEPTEMBER 19: Jalen Hurts #1 of the Philadelphia Eagles prays before the game against the San Francisco 49ers at Lincoln Financial Field on September 19, 2021 in Philadelphia, Pennsylvania. (Kate Frese for PhillyVoice)

It’s the most wonderful time of the year. We all sit down and dedicate a day – or week – to reminding the world how thankful we are of so many things we take for granted every other day.

Or maybe it’s the opposite. Maybe it’s magnifying the good even more than it currently is in our lives. We are thankful for people who support us, our success is a constant ‘thank you’ to them but can dedicate this day – this turkey day – to that someone special. Sure, the influence or positive impact is a constant one – especially the more impactful that person may be in our lives. Sometimes it’s even a stranger; someone you’ve never met but continues to help fuel a positive light.

Today I dedicate the inaugural “Turkey Day of Giving Thanks” Award to Jalen Hurts. You deserve it kid and keep on shining like a diamond.

I’m thankful for a lot of things in Philadelphia sports – like Bryce Harper’s MVP presence on the Phillies. His ability to speak like a member of the front office in making moves or adding players, which I wholeheartedly support. But it wanes a little after that. The team failed to build around him early in this long deal, and it’s hard to think he will play this well five years from now. But I am beyond thankful for Harper being here and how much fun he is to watch.

The Flyers and Chuck Fletcher truly did some positive work this offseason and look to have built a fun team that will compete in the playoffs. Of course, this comes amidst a 3-game skid where the team lost some ground in the standings. They continue to deal with injury, and it helps mitigate the long-term concern of the team. They give out a feeling that they are certainly heading in the right direction, trending upwards when fully healthy. There’s hope in the air and a plan on the ground. That’s all we ask and I’m thankful for that here, but it’s not going to dominate my day.

I’m thankful for the Sixers having someone who can do a couple of key things on a winning team. Tyrese Maxey is blooming. He’s one of the best young point guards in the NBA and has made a lot of people forget about Ben Simmons – on offense. Maxey is a gifted scorer and has been a constant presence on the floor despite other starters dropping left and right. I’m thankful for Joel Embiid, etc etc etc, but it’s hard to see what the future holds. We have another year where it’s just holding our breath until he returns to the team. Finally, a pre-emptive thank you to Daryl Morey for shipping Simmons out of here.

No, none of these things will match what truly drives us in this city. They are great consolation prizes or secondary conversations over turkey and lasagna. But only after the Eagles, and only after Hurts. Today I’m going to be that 13-year-old fan standing up at the Thanksgiving dinner table giving thanks – not to my parents, or teacher, or coach, or girlfriend – to Hurts and the Eagles.

Giving the fans their first opportunity to cheer the home team following a win was a huge step in this season. Beating a beat-down Saints team was not as important as the win itself. For four weeks this season fans left the stadium upset and bitter. It fueled the negative conversations that permeated this city. It helped cause more division than your social media app of choice, without the dog memes to help balance out your anger. Technically there were ‘dog’ phrases, just no memes.

The way in which the Eagles won – the way in which Hurts played in front of the fans – was everything. Fans got to see Hurts do something that hasn’t been done by an Eagles quarterback in the history of the franchise. This wasn’t a fluke, it wasn’t a footnote in the books, it was a sustainable weapon that can be applied each week. Hurts torched a team with his feet and New Orleans never caught up. There is zero reason to believe the Eagles can’t put pressure on every team they face – no matter the record nor their defensive ranking.

I’m thankful for the recipe being in place and the cook – Nick Sirianni – following the plan. It’s as simple as getting an early lead, then asking your offensive linemen to physical dominate their opponent. The holes open, and different backs have been able to take full advantage. The backs have it exponentially easier when they aren’t making their first move to avoid a defensive lineman. The offensive linemen have it easier when they run block as opposed to pass blocking – especially for a backup. Once the Eagles are up – which they have been over bad teams – they run downhill and down throats.

This is what we wanted earlier in the season; it’s just they couldn’t get up on much better teams. They still aren’t a top tier team, but the Eagles aren’t a bottom tier squad either. That’s something we just weren’t sure of at the start of the season. It's something that is clear now, that we are watching a team on the rise. Nobody knows how high the team can go, if it’s even worth losing status in the draft for the 7th playoff spot.

What we do know is this - Hurts played himself into the starting quarterback role moving forward with his electric play. He has the skill set to succeed in the NFL, and if you are concerned he isn’t throwing enough – or well enough on those throws – then look at the people around him. Not the players so much – who will get better – but the people growing him as a talent. He’s not Lamar Jackson or Josh Allen or Russell Wilson or Tom Brady. But he’s also not Carson Wentz, and not surrounded by reports of constant teammate issues. Hurts wants to improve and there’s zero indication he won’t take to coaching.

That’s a lot to be thankful for, now pass the stuffing.

I think a lot of people are going to need a reason to watch this football game, so why not make your time worth its while. This total opened at 44.5 and I smashed the under as soon as Jared Goff was ruled out of last week’s game. The Lions are an absolute mess, but their defense is playing a little bit better. That’s key because the Bears are also a mess — even though they may have more talent at the QB position with Andy Dalton over an injured Justin Fields. People forget that while Thanksgiving football is an amazing creation, it’s still a short week. Offenses usually struggle on these shorter weeks, and when you don’t have an offense like neither team does, it’s just easier to pound the under. The total already moved three full points, so jump on now while it’s still above the key number of 41.