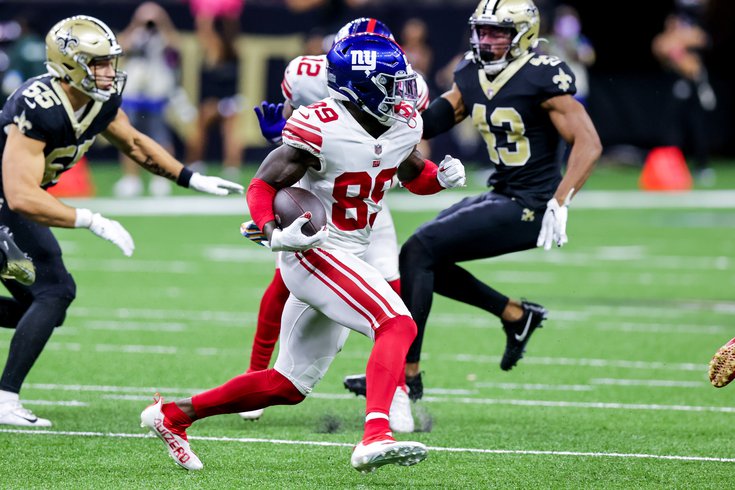 The Philadelphia Eagles are a relatively healthy team after 11 games. The New York Giants have a pair of starters on IR both on offense and defense, and will be severely depleted at the offensive skill positions in this matchup.

Here is the Eagles-Giants injury report, with analysis.

• Thursday: Slay being a limited participant is a good step in his progression in the concussion protocol.

• Friday: Slay will play on Sunday, as he has cleared the concussion protocol. That is a very good development for the Eagles.

The only player of note with any injury designation is Howard, who is out. Howard has only played in four games this season, but he has sparked Philly's new run-heavy offense:

MORE: Week 12 NFL picks: Rounding up the experts' predictions for Eagles vs. Giants | Mailbag: Might the Eagles extend Hurts' 'tryout' by another year?

• RG Brandon Brooks (IR): Brooks suffered a pectoral injury against the 49ers. It's "only" a pec strain, as opposed to a tear, so while he'll likely miss time (about 8 weeks, per Lane Johnson) on injured reserve, it was initially not thought to be a season-ending injury. Brooks got hurt Week 2, so Week 11 was 9 weeks. Nick Sirianni has been asked multiple times about Brooks' possible return, but no useful information has been given.

• LB Davion Taylor (IR): Taylor has started the last six games for the Eagles. He had his best game as a pro in Denver Week 10, when he forced a pair of fumbles against the Broncos, one of which was returned for a touchdown by Darius Slay. Taylor was drafted as a raw prospect out of Colorado during the 2020 NFL Draft, and while he still has a ways to go as a professional linebacker, he has made positive strides during the 2021 season. He was replaced in the lineup by Alex Singleton against the Saints.

• Wednesday: Toney's quad injury is worth monitoring throughout the week.

• Thursday: There were no improvements from Wednesday to Thursday on any player.

• Friday: Oof. With Sterling Shepard out, Kadarius Toney likely out, and John Ross questionable, the Giants' only healthy receivers of note are a struggling Kenny Golladay, and Darius Slayton, who has had good games in the past against the Eagles but has otherwise been quiet.

The Giants will also be light at tight end, with Kaden Smith out, and Kyle Rudolph likely out.

Meanwhile, Saquon Barkley hasn't looked at all like the player he was as a rookie, as injuries have taken a toll on his body. He's banged up with an ankle injury.

• LB Blake Martinez: Martinez is a tackle machine whose season over after suffering a torn ACL. From 2017 to 2020, Martinez has averaged 148.5 tackles per season.

His absence against a red-hot rushing attack isn't ideal.

• S Logan Ryan (COVID): Ryan is a starting safety. He is second on the team with 72 tackles, and is one of the Giants' leaders. If he can't go, the Giants will be without two starting safeties and the starting MIKE linebacker.

• S Jabrill Peppers: Peppers is the other starting safety for the Giants. Torn ACL, done for the season. 91 tackles, 2.5 sacks, 1 INT in 2020. He was replaced in the starting lineup by Julian Love.

• C Nick Gates: Gates was the Giants' starting center to begin the season. He suffered a gruesome broken leg Week 2 in Washington, and his season is over. The current starting center is Billy Price, who the Giants traded for near final cuts.

• LG Shane Lemieux: Lemieux began the season as the starting LG, but his season is over after having surgery to repair a torn patellar tendon in his knee. His replacement was initially Gates, who filled in at LG with Price taking over at center, but with Gates' season also over, Matt Skura has had to fill in at LG.

• WR Dante Pettis: In three games with the Giants this year, Pettis had 10 catches on 16 targets for 87 yards and a TD.