Who deserves the blame for the Eagles' Week 12 loss? 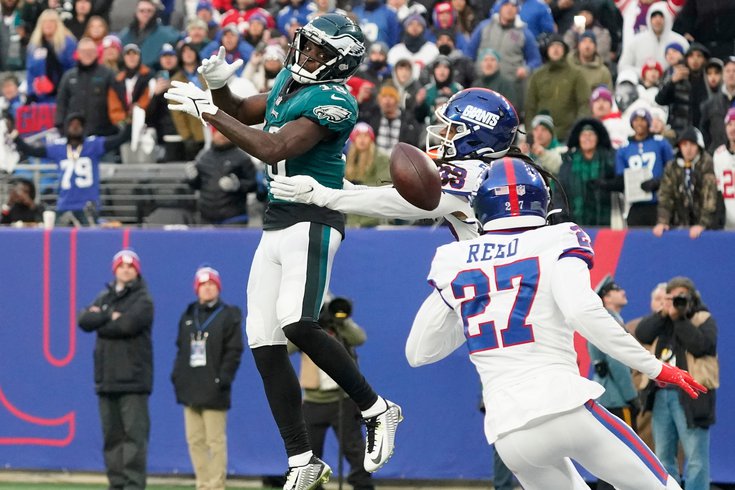 The Eagles defense held the Giants to 13 points, and had what really seems like countless opportunities to breeze to victory over their lowly division rivals Sunday.

But some incredibly sloppy and uncharacteristically careless play led to a 13-7 loss in New Jersey on Sunday afternoon, putting the Eagles in a tough position with regard to their late season push for a wild card spot (at 5-7).

Unlike many wins and losses this season, where a clear team effort is the deciding factor, it seemed as though there were more than a few goats in Week 12 deserving of the singular blame for the setback. The defense for the purposes of this article is really blameless. It was the mediocre offense that is why the Birds are driving back home having lost a lot of ground in both playoff races.

The Eagles quarterback is the first reasonable culprit for the loss and a simple look at his stat line explains why. He completed just 14-of-31 passes for 129 yards, threw three interceptions and was responsible for no touchdowns. And while he did add 77 yards on eight carries — and was the Eagles' leading rusher — it's hard to argue that he had a good game that will do anything to further his standing as the team's QB1 of the future.

The worst thing about the interceptions is that they were all avoidable mistakes. Instead of unlucky bounces or tipped passes, Hurts took way too many chances throwing into very narrow openings, or missing his receiver entirely.

Like this one, which stopped a scoring chance dead in its tracks:

For whatever reason, Hurts was unable to take advantage of what was often a clean pocket. He had several chances to throw balls away to avoid disaster and he instead took risks that cost the Eagles in a big way.

“I put this team in a bad situation in the first half.” — Jalen Hurts

Reagor made one big catch to help the Eagles fight back into this one, but there were a pair of tosses from Hurts that hit him square in the hands during the Eagles' last ditch effort to win in the final seconds. If he secures either, chances are the Eagles are able to squeeze out an improbable victory.

The 2 Jalen Reagor dropped balls in the final minute - BOTH passes hit his hands#JalenReagor pic.twitter.com/9JVeOquBHS

The wideout was a first-round pick a couple years ago, famously being taken ahead of several other good receivers like Justin Jefferson. He's mostly been relegated to a returner — an incredibly ineffective one at that — and is surely going to be hoping for a Nelson Agholor-type redemption sometime in the near future. But if he keeps dropping passes in pivotal situations, it might have to be with another team.

Rightly, Reagor faced the music and took the heat for his mistakes after the loss:

Jalen Reagor acknowledges the two drops late. He called it uncharacteristic. He says the players have each other’s backs.

Sirianni got away from the game plan that helped the Eagles win three of four heading into Sunday. And though he would eventually find a way to get the run-pass ratio onto the run side, a 33-to-31 ratio isn't the kind of play-calling that was so effective against the Lions, Broncos and Saints.

In the early going, Hurts was throwing the ball way too much and the offense was suffering for it. The Hurts interceptions and a bevy of three-and-outs set Philly back and it was only the defense bailing them out that gave Sirianni the chance to finally pull the Boston Scott lever and get the offense out of neutral.

It's worth mentioning that for whatever reason (possibly injury?) Miles Sanders' last touch came with three minutes to play in the third quarter despite averaging 7.1 yards per carry on nine runs — and no fumbles a week after nearly having two.

Sirianni may have his hands full with a bit of adversity facing the team this week.

DeVonta Smith livid as he came off the field. Threw his helmet to the bench. Wanted the ball. Was open. Never saw a target on the #Eagles' final two drives.

Smith is right to be mad after Reagor got seven targets, the same number as he and Dallas Goedert combined. Sure, some of that is on the quarterback, but the head coach has to make sure he's getting his best players involved. That was part of what made the Eagles so successful in recent weeks — taking advantage of what his players do best — and the Eagles seemed to go away from that far too much on Sunday.

FInally, it's weird to be blaming a loss on a backup offensive lineman, but a case can be made. Herbig came in for Jason Kelce in the first half (Kelce would return in the second), and committed two really bad penalties, one of which negated a Boston Scott touchdown that could have changed the entire complexion of the game.

Whether or not Kelce's injury was minor or serious, he clearly saw he was needed in the game and found a way to play through pain in the second half — and sparking Scott's actual TD run with a key block — while Herbig was left feeling the guilt of messing up pretty bad in his limited time playing center (he came back later in the game after right guard Jack Driscoll left with an injury). The offensive line has been a real strength this year for the team, despite the absences of Brandon Brooks and Isaac Seumalo. Them staying healthy will be key for the Eagles to have any chance at playing postseason football.