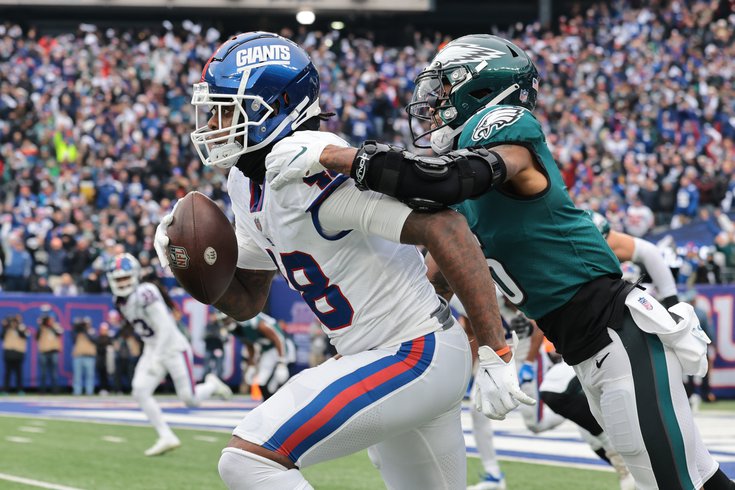 The Eagles' offense was an absolute disaster on Sunday, and that was enough to bury Philadelphia in their 13-7 loss to the Giants.

• This is going to come as a surprise to absolutely no one, but when the Eagles run the ball, good things happen. It doesn't necessarily matter who it is or what position they play, committing to running the ball in any way leads to success for this group.

Given that their quarterback is one of the best running QBs in the league, a dynamic talent in the open field, it was a shock to see the Eagles wait so long to turn Jalen Hurts loose, especially with how bad he looked as a thrower against New York. Once they did, the Eagles came alive, and Hurts was indisputably their biggest weapon on the ground, rushing for nearly 10 yards per carry through three quarters of this game.

The increased emphasis on running the ball allowed Giant-killer Boston Scott to get going as the game wore on, and if not for a penalty that wiped out an excellent run for Scott toward the end of the first half, this would have been another monster game for him against the franchise he has tortured for years. As it is, he was the first Eagles player to find pay dirt, and that was worth celebrating on a day where the offense needed something to hang its hat on.

Ultimately, the change in focus ended up being too little, too late.

• Philadelphia's inability to stop the run has made life miserable for the defense all season, with teams able to keep the Eagles guessing in playaction while picking up chunk yards too often. That was not the case Sunday, with the big boys in the trenches buckling down and limiting the Giants to small gains or negative plays on the vast majority of their runs.

Saquon Barkley has not looked like the same guy physically after tearing teams up early in his career, and New York's limitations on the line were another huge factor, so nobody should be taking a victory lap for this performance. That being said, almost everything about this performance was solid, with the Eagles rarely missing tackles and doing a good job of plugging holes whenever they opened up.

• It is unquestionably good that the Eagles have established an identity of any sort over the last month or so, winning games on the ground as a result of excellent blocking and a collective effort rushing. It is also concerning that they cannot trust their starting quarterback to win games through the air, and that will be true no matter how many bad teams they're able to beat before this season ends.

Winning playing the way the Eagles have relies on the idea that Hurts will limit or completely eliminate big mistakes, which has been the case for most of this season. But even if we're charitable on his first interception — I'm still waiting for FOX to show a replay of whether Quez Watkins was interfered with or not — the second pick of the day was an absolute howler, an obvious case where he needed to get rid of the ball and take three points and the tie at halftime. His third interception never really had a chance to be completed, and the Giants punished him. On the deep throw to Reagor, Hurts never even made an attempt to disguise where he was going with the football, locking in on his first option and giving the defense ample time to prepare to turn him over.

Without those mistakes, Hurts would have had a "normal" bad day, one where he could not get in tune with his receivers or find his footing in the pocket. Those turnovers just amplify the mistakes he made as a thrower all day long, with a huge percentage of Hurts' passes put behind whoever he was trying to get the ball to. Even if you think the skill position guys could have bailed him out more often, the quarterback play was ghastly, and feeds into any fear you might have about Hurts needing to try to win game as a thrower rather than a runner.

Maybe he simply should have been targeting different players. DeVonta Smith and Dallas Goedert did not see the ball come their way very often in this one, which is pretty obviously a complete failure for this group. Your best players need to get the ball to impact the game. Even Jim Gardner found a moment in his busy schedule to acknowledge this:

Could someone remind Jalen Hurts that he has a tight end. #88

A quarterback not having it is the sort of thing the head coach has to acknowledge and adjust around at some point, and Nick Sirianni never really got there. On Philadelphia's opening series of the second half, the Eagles had a third-and-two opportunity on New York's side of midfield, only to run an empty backfield pass on third down and throw a slant to Jalen Reagor of all people on fourth. This was in spite of the Eagles finally getting going on the ground leading up to that moment and was baffling before the ball was even snapped, let alone after we saw the poor results.

This looked like a team with absolutely no idea why they'd been able to win some games and perform better recently, and that ultimately falls on the coaching staff. Sure, you didn't have Jordan Howard, but this group put 200+ yards on the ground in a game that was tight for all four quarters, beating the Giants up even when they knew Philly wanted to run. It's not like the Eagles were down multiple scores in the second half and got baited into playing a style of football that doesn't suit them. It was an active and purposeful choice for the Eagles to go to the air as much as they did.

Even as I say all that, it makes me feel like a football dinosaur to write some of it. If a rival team's fanbase pined to run the ball as much as Eagles fans are with Jalen Hurts at quarterback, Philadelphia would spend most weekends mocking them for a lack of faith in their quarterback. You would absolutely make fun of and degrade this offense if the Cowboys were the team running it. When passing plays often feel like a waste of time and you are able to gain more yards per play on the ground than the air, those are major warning signs.

In fact, Boston Scott fumbling the ball in the final two minutes only happens because you have to play a style of offense that centers around the run instead of the signal-caller who is supposed to control the game and dictate terms when it matters. That doesn't excuse this Scott fumble, but it's context worth considering:

We've seen a lot of progress from the offense recently, even if we weigh it against the lackluster competition they've been up against, and this game is a reminder to take a deep breath before crowning anybody. Hurts' passing warts have been there even in games they've won this year, and the results can't outweigh the process.

• On the whole, the defense was not the problem in this game. Plays were made in the secondary that either kept points off of the board or ended Giants drives, and they were strong against the run save for a few outlier plays. Unfortunately, they put absolutely no pressure on Daniel Jones for most of the afternoon, and that was enough to doom them.

It really boggles the mind that they're in this spot even if we account for the weight of Brandon Graham's absence. Fletcher Cox has been a big-time, long-term producer, Javon Hargrave was on fire to start the season, and Derek Barnett was once billed as the guy who broke Reggie White's sack record at Tennessee. It's hard to remember any of that now, because these guys don't put pressure on the pocket no matter who they're up against this year. Even if you think the Eagles need to blitz more, that's partially true because they are completely inadequate when they try to rush four guys.

The Giants' offense wasn't good enough to use that failure to put a lot of points on the board, but the lack of a pass rush allowed them to play more aggressively on offense than a lot of teams might in clock-killing spots. With Daniel Jones able to stand in the pocket and scan the field without taking hits or feeling pressure in the pocket, he was able to make some huge throws in the fourth quarter to kill this game off, finding sweet spots in Philadelphia's zone coverage.

As we've seen throughout the year, there's just no way to win if you let an NFL-caliber quarterback sit in the pocket untouched for most of the day. Jonathan Gannon probably needed to adjust the approach at some point in the second half.

• Look, it's hard to expect Jalen Reagor to catch a pass that hits him in the hands. Asking a lot out of a guy whose entire job is supposed to center around catching footballs.

Why in god's name were they going to Reagor so often on Sunday, let alone in the final minute of the game? Did I miss something? Are we in the Twilight Zone?

• The Eagles are going to come out of this game with a heaping helping of health issues. It felt like every series sent a new Eagles player to the sideline, ranging from Jason Kelce to Miles Sanders to Jack Driscoll, each of whom dealt with issues at one point or another.

Philly has proven capable of replacing Sanders when they need to, so long as Jordan Howard is available, but Kelce is the guy you have to keep an eye on from here on out. If they lose one of their best players on the line this late in the year, even if it's only for a game, they're going to find it harder and harder to play the way they want to.

• Philadelphia's return game is absolutely anemic this year, and Jalen Reagor deserves to eat a lot of the responsibility for that. The only time we've seen his alleged return skills come into play was against the Packers on a 74-yard touchdown last season. Outside of that, he is all college reputation at this point, a player with so little production as a receiver or special teams player that he'd likely be riding the bench if not for his draft status.

I'm sure someone who grinds the tape harder than I'm able to can tell you why blocking and special teams schemes are a factor in all of this, but the basic problem is that Reagor gives them absolutely nothing. If the return ace needs perfect blocks in order to make big plays, he's not much of a return specialist in the first place. Make somebody miss every so often.

• The only reason this wasn't a total blowout in the Giants' favor is because the Giants are a bad football team, too. If Hurts had gifted multiple turnovers to an even halfway decent team, they would have buried Philadelphia shortly after halftime, turning this one into a laugher with ease.