John McMullen: Accountability is great for Eagles, production would be better 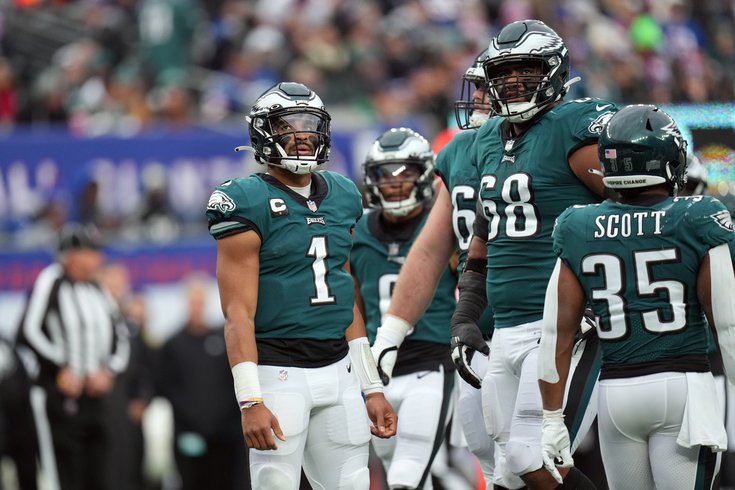 Philadelphia Eagles quarterback Jalen Hurts watches a replay after being sacked by the Giants defense in the second half.

EAST RUTHERFORD, NJ – It felt like an opportunity to tinker, a chance to push the envelope of Nick Sirianni’s offense and Jalen Hurts’ evolution in the system against an inferior opponent in an effort to get ready for bigger things in January.

A funny thing about 5-6 teams who may be starting to think they are a little more than that: reality has a way of punching you squarely in the face.

The roundhouse Sunday came in the form of a 13-7 setback to the woeful New York Giants, perhaps apropos in the former home of Bill Parcells, the Hall of Fame coach famous for his “you are what your record says you are” sentiment.

Plenty of players contributed to the loss to the Giants but none more than Hurts, who finished with three interceptions and a 17.5 passer rating.

Yet the Eagles’ quarterback could have been picked up by Jalen Reagor or Boston Scott late in the game and was let down in the form of two egregious drops by Reagor and a fumble by Scott.

Ultimately, though, Sunday was about the macro of the future and not the micro of a bad loss to a bad team or any individual failings.

Giants’ defensive back Julian Love explained the growing thought process around the league when it comes to Hurts and how to deal with the Eagles quarterback.

“Obviously he’s pretty dangerous at running the ball, and they’re finding that in their offense,” Love explained. “We just tried to play physical and play straight up and kind of make him throw the ball, so to speak. He’s very talented, but we wanted him to beat us throwing.”

New York coach Joe Judge went even further, bringing up Georgia Teach’s old triple-option to explain how you have to play the current Eagles.

“This isn’t like playing Georgia Tech – not anymore – but this isn’t like playing triple-option teams, where you’re facing those kinds of schemes, but it’s similar in terms of you’ve got to play that assignment defense against this team and understand how all the pieces fit and who has each responsibility and trust the guys to make the plays,” Judge said.

What all that means is that opponents think the Eagles’ offense is a gimmick, and what Sirianni was attempting to do early on Sunday after the team’s recent success was building off of that to take the next step into a more well-rounded unit that can strike in multiple ways.

It failed on Sunday.

“It’s never going to be an A, B, C or D if you turn it over three times,” Sirianni said when asked about his QB’s decision-making and performance. “Obviously, he didn’t play good enough and we didn’t coach good enough and it’s all of us. It’s never just one guy. … When you turn the ball over three times, again, there are different things at play there, but not a winning performance.”

Hurts, meanwhile, proved to be accountable.

Reagor and Scott joined their on-field leader as accountability buddies.

Reagor came out and spoke to the media “just for me to take ownership.”

“It’s not on one person or one specific thing, just to take ownership of what happened in that scenario,” he said.

Right now the Eagles are a mediocre team just made aware that a bottom-feeder not only considered them a gimmick but got the best of them with a game plan built on that very thesis.

Accountability isn’t the answer for that. Production is.

“I just feel like, as Jalen always says, everything is still in front of us,” Reagor noted. “We still have an opportunity next weekend and just to stay positive and just try to do what you can to help stack up wins.”