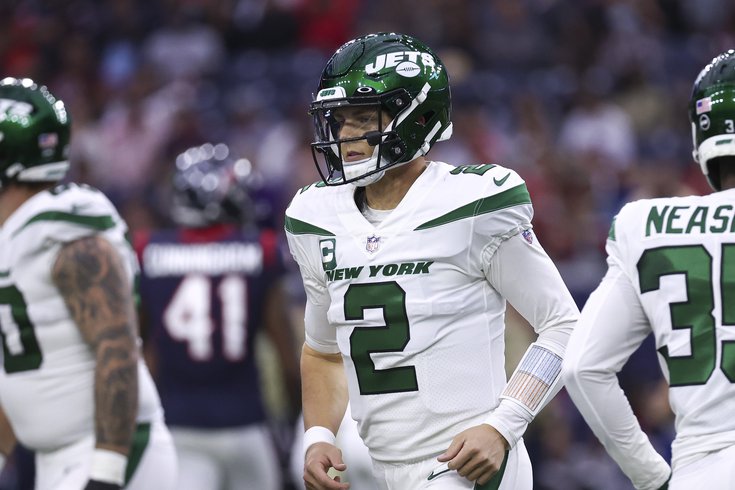 Zach Wilson has had a rough rookie season.

The Philadelphia Eagles will make their second trip up to MetLife Stadium in eight days when they take on the New York Jets, a young, bad team with the worst point differential in the NFL at -135, but one that has also somehow managed to win three games.

They haven't stopped it so far this year.

Meanwhile, over the last five games, nobody has stopped the Eagles' rushing attack:

Nick Sirianni forgot at times against the Giants last Sunday that opposing defenses haven't been able to stop the Eagles' rushing attack of late, and as a result, Jalen Hurts ended up with 31 pass attempts, and a loss. He would be well served not to forget again this Sunday.

2) DeVonta Smith against the Jets' cornerbacks

The Jets don't have an obvious CB1. That title would probably go to Bryce Hall, a 2020 fifth-round pick.

Against the Giants last Sunday, Smith only got four targets, which is an unacceptable number for a receiver who is far better than anyone else on the team.

On Tuesday, offensive coordinator Shane Steichen had the following back and forth with reporters about the final play of the game:

Q. Can you kind of take us through the final offensive play? Eagles Head Coach Nick Sirianni kind of said WR DeVonta Smith, I guess, was 1A, TE Dallas Goedert was 1B. What was the original goal of the play? (John McMullen)

SHANE STEICHEN: We were trying to get the ball to [TE] Dallas [Goedert] and [WR] DeVonta [Smith], and they covered it up pretty good. [QB] Jalen [Hurts] scrambled around and threw it to [WR] Jalen Reagor at the end of the game.

SHANE STEICHEN: Yeah, he got undercut a little bit and so he was looking for him, and then he scrambled around.

Q. So he shouldn't make that throw? (Jeff McLane)

SHANE STEICHEN: He got a little pressure, so he had to move around a little bit.

Q. Wasn't the pressure after he was initially open on the call? (Jeff McLane)

SHANE STEICHEN: Yeah, he moved around. The guy was kind of underneath it. It would have been a heck of a football throw if he made it.

I mean, Smith was quite clearly open. You have to pull the trigger on this.

And sure, Bradberry undercut it, but that should still be a relatively easy touch throw for an NFL quarterback over the head of the corner. If the messaging to the media on that play is the same as the messaging to Hurts behind closed doors, that's not great.

Sirianni acknowledged that the passing game must go through Smith and Dallas Goedert, but said that they can't be force fed.

"Definitely when you put the ball in the air you definitely always want it to start with 88 and 6," he said. "That's definitely been our priority. Again, that doesn't always mean it's going to happen that way. You can't just tell the quarterback to force feed it there no matter what."

Maybe. But if guys like Jalen Reagor are getting the same number of targets as "88 and 6" combined, that's a huge win for the defense. Sirianni and Steichen have to find ways to generate offense through Smith. It can't just be, "Welp, a guy was covering him," because the other receivers on the roster aren't capable of making plays when Smith isn't open.

3) The Eagles' offensive line vs. Quinnen Williams and John Franklin-Myers

Jack Driscoll joined Isaac Seumalo on season-ending injured reserve, while Brandon Brooks is not yet ready to return to the lineup from his pectoral injury. As such, the Eagles are now missing three of their top four guards. Meanwhile, Jason Kelce missed a big chunk of last Sunday's game with a knee injury, and while it is expected that he will play on Sunday, he may not be 100 percent.

The Jets have a pair of threatening defensive linemen in Williams and Franklin-Myers, who have six sack each this season.

Wilson has probably been the NFL's worst starting quarterback this season. His numbers, and NFL rankings, out of 34 qualifying quarterbacks:

Darius Slay has had touchdowns in three of the Eagles' wins this year. They came against the Saints, Broncos, and Lions. They also turned the Panthers over three times in their win over Carolina. I'm not breaking new ground here by saying that turnovers are kind of a big deal in football, but it's worth noting that the Eagles did not turn the Giants over on Sunday, and that game ended up in a loss.

Gannon has an opportunity to confuse an easily confused quarterback in Wilson, and the Eagles' defenders have to capitalize when big plays are there to be made.

5) Where should the Eagles' defensive line go feastin'?

Last Sunday against possibly the worst offensive line in the NFL, the Eagles sacked Daniel Jones once, and it was on a play in which Jones gave himself up to ensure that the Eagles had to burn their final timeout. The Eagles' defense played well enough to hold the Giants to 13 points despite the offense turning it over four times, but it was a another disappointing day for the pass rush.

This Sunday, for as bad as the Jets are overall, their offensive line really isn't that bad.

Fant is playing in relief of Mekhi Becton, a 6'7, 363-pound monster LT that the team selected with the 11th overall pick in the 2020 NFL Draft. The Jets also used a high first-round pick (14th overall) on Vera-Tucker in the 2021 draft. That seems to be where Joe Douglas wants to build.

The Jets acquired for Duvernay-Tardif at the trade deadline to replace the now-benched Greg Van Roten in the lineup.

During joint practices with the Jets back in August, the Eagles' defensive line absolutely dominated the Jets up front. Let's see if they can do it when it matters.