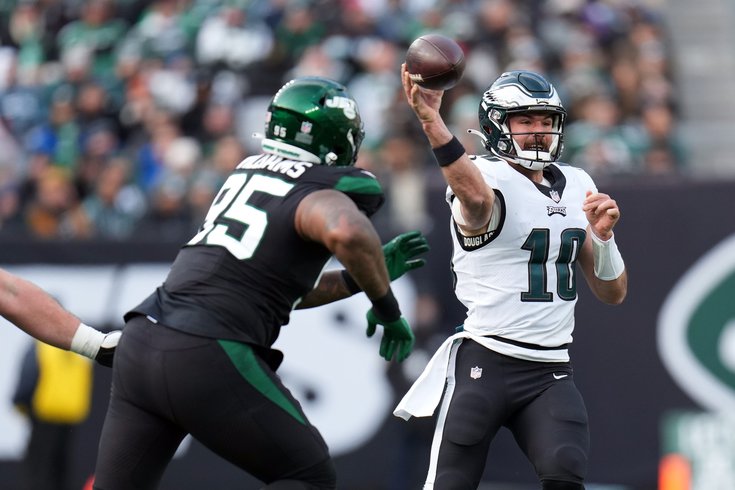 Gardner Minshew did what he needed to lead the Eagles to a much-needed win over the Jets Sunday.

The Eagles did what they were supposed to Sunday, beating the lowly Jets 33-18 to get to 6-7 heading into their bye. But it's how they did it, and who they did it with, that will surely have people talking as this city waits an eternity for more football.

We've already cautioned against overreacting to a good Gardner Minshew performance — which we got in Week 13. But what can we reasonably take away from what we saw on the field in East Rutherford with the Birds' backup quarterback leading them to victory (stop me if you've heard that one before)?

We are presenting the following observations with a couple of key caveats. First, the Jets are bad. Really bad. If you are going to be missing your starting quarterback for any reason, the Jets have to be one of the three or four teams you'd want to face with a backup under center. And second, the Eagles played their cards pretty well during the week, making it seem realistic that Hurts would start until the last possible minute. The Jets defense clearly had been preparing for a totally different style of quarterback.

Still, there were some interesting differences and similarities as the Eagles had a different look at QB for the first time since Carson Wentz was, well, having one of the worst seasons for a QB1 in recent memory back in 2020.

Dallas Goedert needed a couple weeks, but he showed (especially early) why he is worth the monster contract the Eagles inked him to last month.

In contrast to his previous performance with Hurts — where he averaged 4.5 targets and 3.2 catches per game — Goedert and Minshew were on the same page instantly, as each of his first four passes went to Goedert, who had the Eagles first 73 receiving yards, including this impressive touchdown score.

Two of these first four touches were designed tight end screens, which shows that there was a decision made by Nick Sirianni and company to get Goedert involved right from the start.

Goedert scored his second TD when the second quarter started, a 25 yard catch and run to keep Minshew a perfect 8-for-8 through the air.

Interestingly, after the Eagles got the lead they played the ground and pound, and Goedert didn't to a ton after his big first half totaling six catches for 105 yards.

The ratio stayed the same

The Eagles have found a groove this season as a run-first team, reversing the run-pass ration they had over the first seven games of the season — where they threw the ball an average of 34.5 times per game — to just under 23 pass attempts per game over their last five. In that span, they have not only won three times, but they also have grabbed the NFL lead in run-pass ratio, averaging a hair over 50% passes for the season (that number was just 41% passes in their three previous games).

It was clear on the rare occasions Minshew did elect to try and make a play with his legs that it was not even close to the elusive speed or playmaking ability that Hurts brings to the table week after week. Of course, the team was not going to get the 10+ rushing attempts per game they usually get from Jalen Hurts and it showed in the final stat line, as they had their lowest total rushing output since they had just 176 yards rushing in Week 9, with 185 yards on the ground in Sunday's win.

In all, Philly ran it 41 times, compared to 25 throws for Minshew — though a lot of this can be attributed to their trying to run out the clock in the second half.

Do you remember Hurts completing 11 passes in a row, ever, as the Eagles QB? What about four or five in a row? It's something Minshew did, and while we are strongly advising against any kind of grassroots campaign aimed at installing Minshew as the Birds' franchise quarterback, it was interesting to see the Sirianni offense with momentum and without so many incompletions.

Hurts this season has completed 60.1 percent of his passes (after a 52% campaign in four games back in 2020). He was over 60% in just six games this season, and aside from his opening day explosion when he went 27-for-35, he hasn't cracked 70% in his career.

Having a QB like Minshew who is able to connect with security blankets like Goedert or the running backs on the field really helps the offense keep the football, which they did in dominating fashion in Sunday's win. Minshew completed 80% of his passes.

Sirianni has his scheme

One might not have been surprised had the Eagles decided to throw the ball 40 times to try and really take advantage of the Jets subpar pass defense. But for the most part, the play-calling, the style of football and the plan of attack looked more or less identical to how it would have with Hurts in the game. In fact, with Miles Sanders eclipsing 20 carries for the first time in his career, the Eagles looked more committed to the run than ever.

The run-pass ratio, as we mentioned, stayed on the run side. The passing calls were mostly in the mid-range, RPO category with perhaps a little more reliance on the screen game than usual. Minshew completed more passes simply because he was quicker to go to his dump off option than Hurts, who often times takes advantage of a solid pocket to try and go for broke.

Perhaps the team looked the same not by choice, but by circumstance. With news not breaking that Hurts would be unable to play this week until the night before the game, the Eagles were probably game planning with the optimism that his ankle would feel strong enough for him to play. Still, whether by choice or not, the strategy worked.

The Eagles will head to the bye and in two weeks it'll almost assuredly be Hurts back on the field, with the same offense in place when Washington comes to town in Week 15. In the meantime, Eagles fans will be wishing they had a quarterback with the accuracy of Minshew combined with the playmaking and legs of Hurts. Unfortunately, the Eagles can't have both.