Eagles LT Andre Dillard was pretty good against the Cowboys, with gifs and stuff 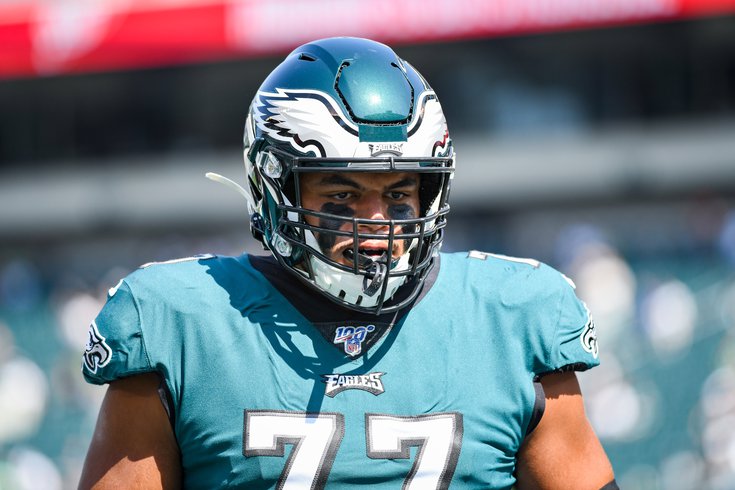 After it was revealed on Friday last week that Jordan Mailata was going to miss the Philadelphia Eagles' matchup against the Dallas Cowboys, the LT position became a significant concern with Andre Dillard filling in.

While the Eagles as a team were bad on Monday night, Dillard played well, and was not the liability in that game that some (self included) believed he might be. I watched Dillard's snaps from the Monday night matchup, and cut up video of his relevant plays. That's here, for those of you with an attention span of around five minutes:

MORE: What they're saying: The Eagles have some problems. Big ones. | Eytan Shander: Win or lose, the Eagles need to at least look like they give a damn | Eagles power ranking roundup: Week 4

Did you watch it? Yes? No? Well, whatever. Here are my takeaways from Dillard's performance.

• Dillard saw finesse rushes all night, which is understandable, given that the Cowboys were down their best pass rusher in DeMarcus Lawrence (plus a lot of other guys). They were playing a linebacker in Micah Parsons at DE, and Randy Gregory was in a starting role. Parsons and Gregory are guys who are going to win with speed, not power, and Dillard handled them quite well.

Dillard's best attributes coming out of college were his quick feet and his overall athleticism, and he showed it on Monday night. He can mirror and match speed guys all day. Like here:

• Dillard did a nice job working with Isaac Seumalo on twists and stunts, with quickness and recognition.

• Dillard's weakness as a pro, by far, has been his inability to anchor against power. Fortunately for him, the Cowboys somehow didn't bull rush him almost at all, with the exception of this rush by rookie Chauncey Golston:

As you can see, Dillard is pushed back for five steps, and it's not even a particularly good rush. For a team that so thoroughly out-schemed the Eagles on Monday night otherwise, it was strange to me that the Cowboys didn't try to run right through Dillard early and often.

• In the screen game, Dillard was frustrating. His athleticism is obvious when he's running out in front of Miles Sanders (below), but he's too passive for my tastes in attacking would-be tacklers. Remember in Week 1 when Jordan Mailata almost killed a guy? I don't think you'll ever see that kind of play from Dillard.

And then here, Dillard has an opportunity to maybe put a hurtin' on CB Trevon Diggs, but he is content to just kind of get in his way.

Mailata would have tried to make Diggs pay for even existing.

• It would be nice to know how Dillard played in the run game, but since the Eagles didn't run the ball Monday night, no such luck.

Monday night was Dillard's best game as a pro, by far. It came against an ideal opponent that did not test his biggest weakness, however, it was perhaps a confidence-building performance.

I do not think any and all concerns with Dillard's game have been put to bed because he played well Monday night. At some point, if Mailata is going to miss more time, Dillard is going to face some power rushes, and he still has to prove he can stop those.