Eytan Shander: Win or lose, the Eagles need to at least look like they give a damn

For once, Philly fans are willing to prioritize growth over wins — right now they're seeing neither. 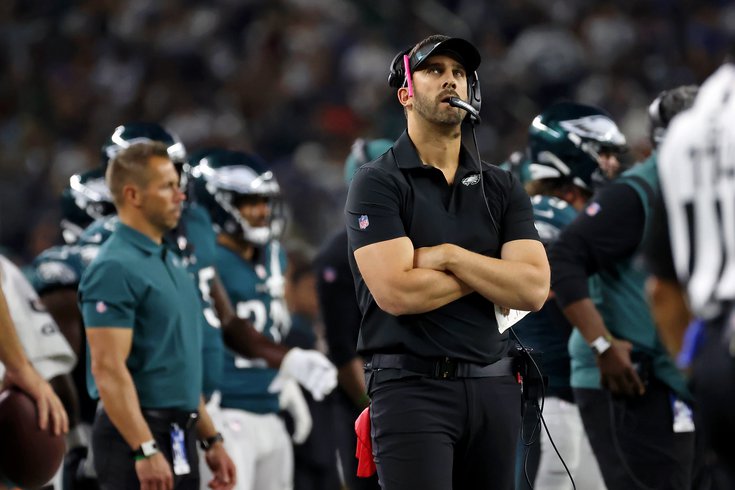 Head coach Nick Sirianni looks on during the second quarter of the Eagles' 41-21 loss to the Dallas Cowboys.

Atlanta feels like it happened last year. Halfway through the game in Dallas, it felt like Fletcher Cox’s first-quarter touchdown happened last month.

Three weeks into the NFL season and we are left with a ton of questions, mainly surrounding the identity of the Philadelphia Eagles. Unfortunately, the T-shirts and bulletin board material are starting to wear on people, especially with the results they are getting.

Over the past two weeks the Eagles have destroyed any true momentum that could have been established following their dismantling of the Falcons. Yep, it’s that bad. But it’s also not irreversible. It’s going to take hard work, effort and, most importantly, a little focus.

Not to counter the thousand-plus word think pieces you’ve no doubt seen recently, but pandering to Philadelphia sports fans is just scratching the surface. The real root of success in this city for any head coach (or athlete for that matter) is winning, with a dash of effort and a sprinkle of giving a shit on top. And in Year 1 of the Nick Sirianni Era, we have a rare scenario here with our favorite team where winning or losing games isn’t the only thing.

Yes, it’s true, we do root for our Eagles to win every week, but we watch with a far more patient eye. This is all about Jalen Hurts developing right? Well, then it might be a good idea to give him some help and run Miles Sanders more than twice. It’s great to see Sirianni and Hurts – and pretty much everyone else – take Monday night as a learning experience. It’s also sobering to know that for two straight weeks, we are hearing the same thing.

Just show up like you’ve prepared, put up a fight, call plays that have your running back actually run the ball. Don’t make this week – or any week – about a damn t-shirt. These are the easy fixes to returning to good our graces, Mr. Sirianni — without even having to beat the Chiefs.

I’m telling you how to do this, man. As quickly as wearing a “Beat Dallas” t-shirt can get you in the good graces of the fan base, a blowout loss to a division rival on national TV can erase any and all of that good will. But you can restore what you lost on the field by having an actual plan this week.

My goodness, it seems like over the past two weeks they haven’t prepared for anything on offense. The defense at least had a day against the Niners. But let’s be clear, the bar was never raised back to normal following the Falcons, but rather to a point where the basic expectation was that this team was going to fight.

If Sirianni comes out looking lost in the headlights against the Chiefs, then he’s going to have to wear one of those Chip Kelly t-shirts all week. The team looked lost and had no leader reigning them in — be it player or coach — on Monday night in Dallas. Again, these issues are fixable and should be the prime focus of this season.

What happened in Dallas simply can’t happen again. They can’t neglect the running backs. They can’t go an entire game without any pre-snap motion. And if that’s too complicated, then look at it this way: The Eagles can’t go into any more games looking like the only one they prepared for was the Falcons.

This isn’t a big ask, it’s pretty much the bare minimum of requests. Think of the difference in prior seasons. We asked this team to win a Super Bowl, or make a deep playoff push at least. This year, they just have to show up and look like they've prepared.

Hurts has some accuracy and arm strength issues, but I am confident he can address them and improve in those areas. That’s going to be a longer play and something I am fine with enduring this season. What I refuse to accept is watching a defense full of veterans willingly handing over yards and points to the opponent. I can’t accept an offense that looks like it didn’t practice together all week.

When you look past all the t-shirts and idioms, you find one of the biggest compromises made in the history of Eagles fandom. We are willing to move winning games back – even just a little – in the hierarchy of what matters each week.

All that we ask in return is that you give a shit.

This one is going to be a rough watch, but the good news is you can bet it and forget it. Houston isn’t going to be able to move the ball, nearly at all against Buffalo. Losing Tyrod Taylor to injury is going to be a major weakness against the Bills. This play is truly about limiting the Texans ability to score and playing off how difficult it is for one team to carry a total.

There’ s a legit chance the Texas lose this football game, so where is the angle of attack here? It’s that the Bills have enough offense clicking where they can carry this total for the most part. Josh Allen and the Buffalo offense will cruise as we may see a third shutout by the defense.