There's no other way to say it — Jalen Hurts had a bad game. He underthrew a deep ball to Jalen Reagor that got picked off, and his threw behind a stumbling DeVonta Smith that ended up in the hands of Trevon Diggs for a pick six.

After that play, Hurts and Smith discussed the play on the sidelines:

Frankly, that pass probably would have looked even worse if Smith hadn't stumbled, in that it would have been thrown even further behind him.

Those were the lowlights. But generally speaking, all the most concerning aspects of Hurts' game showed up Monday night. He threw inaccurate passes, he held onto the ball too long, and he was often too quick to bail from the pocket. After a Week 1 performance that helped his stock in his quest to be the Eagles' long-term answer at quarterback, Hurts took steps backwards in each of his next two games.

To his credit, Hurts took the blame for this loss. The last quarterback never did that.

The Cowboys were very effective running the ball on early downs, setting up a ton of short 2nd and 3rd down conversion opportunities. They ran for 158 yards in total, they had 27 first downs (vs. 12 for the Eagles), and they controlled the ball from start to finish.

I've never been a "YOU HAVE TO ESTABLISH THE RUN' guy, but when the opposing defense is missing a half dozen defensive linemen and they're starting a pair of 240-pound defensive ends, plus a 280-pound DT, maybe you try to bully them and win the line of scrimmage?

Instead, the Eagles ran it with their backs three times. Three! Miles Sanders had two carries, and Kenny Gainwell had one. Hell, Corey Clement (who is now on the Cowboys) got three carries himself in garbage time.

Nick Sirianni revealed during his postgame press conference that his game plan was to essentially win a shootout against a team that they thought was going to score a bunch of points. Lol what? 🤯

Typically, when you're facing a team that you think has that type of offensive firepower, you try to negate that edge by controlling the football, which again, the Eagles were poised to do against defense missing a boatload of defensive linemen.

As you all remember, the Eagles had 14 different starting offensive line combinations in 2020. In 2021, they managed to stay intact for one week, starting the same five guys in Weeks 1 and 2. In Week 3, Landon Dickerson replaced Brandon Brooks (pectoral strain) at RG, while Andre Dillard replaced Jordan Mailata (knee sprain) at LT.

They'll almost certainly have at least one new starting lineman Week 4, as Isaac Seumalo was carted off with what looks like a serious injury. I guess we have to start keeping track of the OL shuffle again?

The Eagles have 35 penalties through the first three games, or 11.7 per game. The NFL record for the most penalties in a single season is held by the Raiders, who had 163 of them in 2011. The Eagles are on pace for 198.

Oh, and Derek Barnett had another bad penalty:

7) The 'When Pandering Goes Too Far' Award: Nick Sirianni

In Week 2, Sirianni ran the Philly Special. It did not go well. In the leadup to the Eagles-Dallas game, he wore a "Beat Dallas" shirt. Surely, Sirianni's choice of shirt didn't make the Cowboys play harder or better in this game, buuuuut it did open himself up to some postgame shade from the Cowboys.

I'd maybe dial the pandering back a smidge.

8) The 'Anything Good?' Award: Javon Hargrave

I guess we should say something nice about somebody? Javon Hargrave continues to crush it. And the punter seems good. 🤷‍♂️

The Eagles will now have to travel back to Philly, and prepare on a short week for Patrick Mahomes and the Kansas City Chiefs, who will be desperate for a win after falling to 1-2 against he Chargers Week 3. Actually, the Eagles' next four opponents are as follows:

The Eagles' next four opponents are the two 2020 Super Bowl participants, and a couple of 3-0 teams they'll play on the road.

If the season ended today (it doesn't), the Eagles would have three top 10 picks! 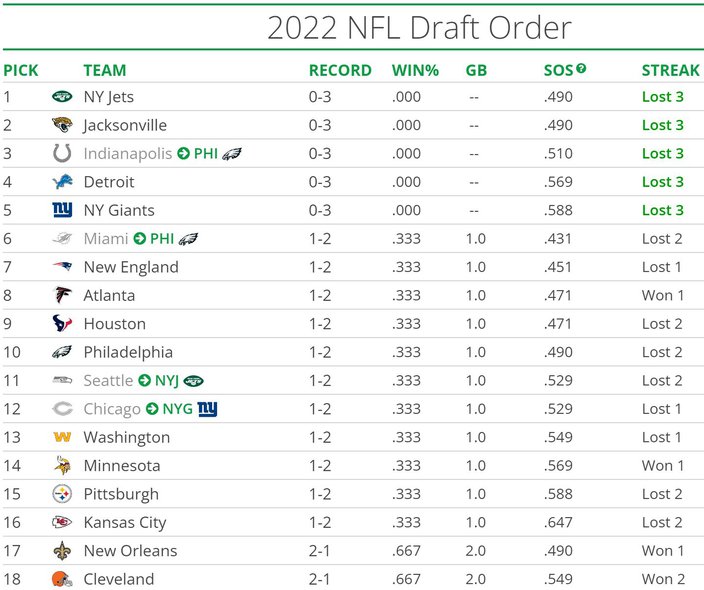 Of course, the Eagles would also be making those picks, so take that for what it's worth.