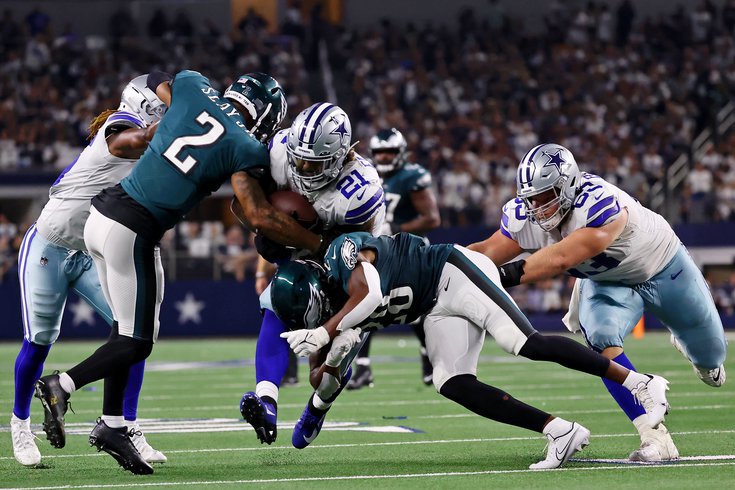 Dallas Cowboys running back Ezekiel Elliott runs with the ball while being tackled by Philadelphia Eagles defensive backs Darius Slay and Anthony Harris.

The Eagles got a big-time reality check on Monday Night Football, sent home hurting following a 41-21 loss at the hands of the hated Dallas Cowboys. There's not a lot to smile about if you're a Philadelphia sports fan right now.

• Quez Watkins should be getting basically all the snaps and opportunities that Jalen Reagor gets, because he seems to do much more with what he has than Philadelphia's 2020 first-round pick. Jalen Hurts did not exactly put this in an optimal spot on the deep shot Watkins hauled in to extend Philadelphia's first scoring drive of the second half, but it didn't end up mattering, with the second-year reciever making a tremendous play to haul in the throw:

WHAT A CATCH! 😲 #FlyEaglesFly

There are similar opportunities for Reagor where you'd be lucky to see him make half of the effort Watkins does here, even if we set aside actually making the catch. If Philly is going to round into form on offense, it seems they'll need to continue giving Watkins more opportunities to show what he has.

Thanks to that play, the Eagles were able to get rolling down the field and eventually pick up six on an easy pitch and catch to Zach Ertz:

If Watkins can be the downfield, explosive play threat to contrast with DeVonta Smith's ability to consistently beat corners off of the line (more on him below), they can be a nice one-two punch in the short term, even if they might need a little more oomph to move toward contender status.

• There are certainly excuses you can trot out for Hurts in this one. His head coach refused to establish the run early, and a young QB in this environment early in his career (night game, on the road) would baseline be expected to struggle. Even against that backdrop, Hurts was bad and missed on a lot of must-have plays, on top of making some absolutely egregious and unthinkable mistakes. Missing here or there is one thing, but Hurts unloaded a barrage of errors down in Dallas and probably brought a lot of people back to reality on who he is as a quarterback.

The pick-six he threw early in the second half was a backbreaker, no doubt, but I would argue the play right before that mistake is just as significant. After a big gainer from Dallas Goedert to open the half, Hurts basically had Goedert on a mirror image of the same route on the next play, and with pressure around him, Hurts misfired on the throw and could only hit Goedert's outstretched fingertips, leading to an incompletion instead of another big gain. It's the sort of play Carson Wentz routinely left on the table and (deservedly) got killed for last season, and it's just as critical under a new signal-caller now.

And sure, as the announcing crew was happy to point out, Hurts' process on the pick-six was indefensible. Locking in too early on Smith, Hurts telegraphed where he was going with the football, making it easy for Trevon Diggs to read where he wanted to go in order to jump the route. Once Smith lost his footing, it was over, Diggs coasting into the end zone with nothing between him and paydirt.

Composure isn't an issue for Hurts on a general level — he comes off as a pretty cool customer most of the time — but between breaking the pocket too early and looking jittery on some of his throws on Monday, there's reason to doubt he can be the unflappable leader you need behind center.

Frankly, I don't think it's a disaster if Hurts just has a bad season because it will mean the Eagles can move on without much fear and seek out a true QB of the future. The middle of the road could end up being the most dangerous path for the Eagles — a season where Hurts blends equal parts promise and punishment could trick Philadelphia into banking on a guy whose ceiling could be limited. Through three games, I think it's far too early to make any sort of definitive call on the kid, so we'll see if the rent gets paid as the season wears on.

(Apologies to Mr. Hurts, but we don't celebrate garbage time TDs around here. We can include the clip for your viewing pleasure, however.)

Hurts and Ward connect on the late Eagles score. #FlyEaglesFly

• All that being said about the quarterback, this was not a game plan suited to win on the road against a division rival with a young QB. There were always going to be nerves and miscues for Hurts in this sort of setting. You have to go into the game expecting that and structuring a game plan around the idea that your opponent needs to respect the run. Nick Sirianni decided to go the opposite route, all but ignoring the run game and leaving Hurts to die on the vine.

It would have been one thing to use the "We were playing from behind!" excuse if the Eagles were consistently drawing up deep and intermediate throws and trying to pick up huge chunks all at once. But the Eagles continued to focus on a lot of underneath throws and screen plays, which makes it a little difficult to sell anyone on the idea that running the ball wasn't palatable. Miles Sanders looked plenty dangerous on the rare occasion they actually put the ball in his hands, and he continues to feel egregiously underused in this offense so far this season, especially when you consider how inept they've looked on offense over the last two weeks.

There have been times throughout my life where "Just run the ball!" seemed to be a silly thing to scream at the head coach in Philadelphia based on how games were playing out. It is more than justified after this game and based on what we have seen so far this year. Running offense is not as hard as the Eagles are making it look right now.

• I wouldn't say I'm that concerned about DeVonta Smith quite yet — he was excellent in Week 1 and obviously has the elite amateur record to point to — but he left some meat on the bone in this game. Hurts may have missed him on some routes where he got open, but Smith got hit right in the hands on a contested play late in the third quarter, and he simply could not find a way to haul it in.

Winning in traffic is something most were concerned about with Smith, even if you were a big believer in him in spite of his frame. And that issue has shown up in a big way through the first few weeks of his pro career, with a major weight gain likely a long way off for the rookie. Just something he and the offense will have to work through/around for now.

• I don't mean to be an alarmist, because the Eagles' schedule will get softer eventually, but this season has a chance to go off the rails in fairly short order. They were getting battered in the trenches in this game and that was before losing another starter on the offensive line. Reinforcements are not coming on the defensive line, unless you consider Brandon Graham moving from a hospital bed to a cheerleader spot on the sideline as enough to get this group in gear. Even with Javon Hargrave playing some of the best football of his life, he hasn't been able to drag them to respectability on his own, and you can only guess how bad things will get when he inevitably cools off (or teams send appropriate doubles at him in the interior).

This does not look like a team with an abundance of talent, which lines up with what a lot of skeptics thought coming into the year. There's a lot of time left to get the formula right and get these young guys into fighting shape, but rubberbands and glue aren't going to turn middling talent into world beaters. They need some high draft picks and reinforcements next year, even if it gets better from here on out.

• You are simply not going to win many games in the NFL if you are constantly shooting yourself in the foot with penalties. It's not like the Eagles are skirting the line of physicality a la the Legion of Boom Seahawks, picking up a few flags in service of being allowed to play a punishing brand of football. They are just consistently making dumb decisions and bad reads and occasionally baffling errors, gifting their opponents extra opportunities to extend drives and put points on the board.

The game was close to being over at this point anyway, but with the Cowboys pushing deep into Eagles territory, the offsides penalty early in the fourth quarter ultimately allowed the Cowboys to pick up a few extra yards on third down, goading them into going for it and icing the game with a touchdown on fourth down. Not every mistake is punished in that fashion, but it's indicative of just how bad things can get when you give the opponent free opportunities. The Eagles have more penalties through three games than any other Eagles team in history. That's really bad!

(One more Hurts note — some of Philadelphia's holding penalties and illegal men downfield penalties are a direct result of Hurts holding the ball too long instead of getting rid of it. Heavy is the head of the starting QB.)

Philadelphia's uninspiring game intelligence doesn't show up in penalties, obviously. On that fourth-down play that ended in a touchdown for Dallas, the Eagles effectively rushed three and dropped everybody else into coverage, and they still managed to allow two different guys to get open in the endzone against all odds. There are major execution errors happening on both sides of the ball right now, which reflects poorly on everyone from the players up to the general manager's office. Have to get it cleaned up quickly.

• Jalen Reagor isn't even a consistently good punt returner, let alone a receiver. I don't understand what they saw in this kid.

• It feels like ancient history now, but I don't know if there's been a time where Philly has been more wrong on a sports debate than Dak Prescott vs. Carson Wentz. I won't pretend I was on the winning side of that argument, but Prescott has separated from him in a downright comical fashion at this point. His control of the offense in Dallas is impressive, and though he certainly has plenty going for him in terms of supporting talent, he's a consistently good decisionmaker who can make some bullet throws and hits far more often than he misses.

• Philadelphia did not need another question mark on the offensive line, and Isaac Seumalo getting carted off of the field was downright sad to see in the latter stages of this one. The Eagles are now down three starters on the offensive line just three games into the year, which seems impossible even for an old-ish group that has had injury woes in the recent past. Fortune has not been on their side.