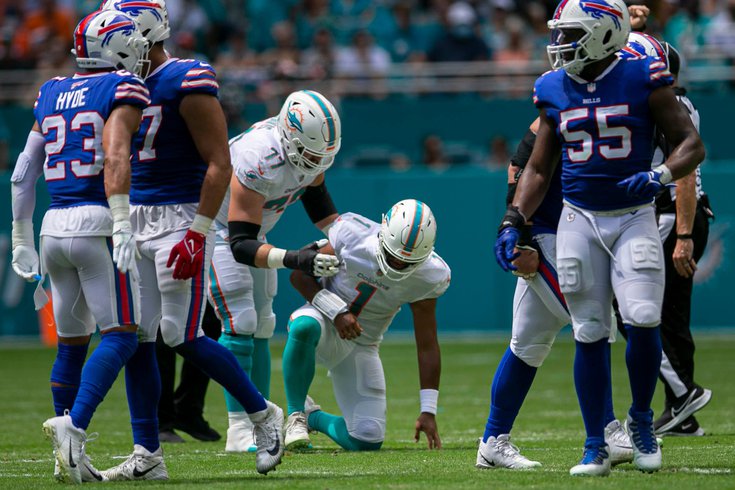 The Miami Dolphins will be placing starting quarterback Tua Tagovailoa on injured reserve, according to a report from Ian Rapoport of NFL Network. He'll be out for at least three games.

Sources: The #Dolphins are placing QB Tua Tagovailoa on Injured Reserve, meaning he’ll miss three games. The hope is he returns from his broken ribs at that point. But it’s Jacoby Brissett’s show for the next three games.

This is relevant to Philadelphia because the Eagles own the Dolphins' first-round pick in 2022. Starting in place of Tagovailoa will be backup Jacoby Brissett. The Dolphins don't have a No. 3 quarterback on their active roster, but they do have one (Reid Sinnett) on their practice squad, who was temporarily elevated to the active roster for the Dolphins' matchup in Las Vegas against the 2-0 Raiders this Sunday.

Tagovailoa struggled Week 1 against the New England Patriots, but Miami was able to eke out a low-scoring win. In Week 2, Tagovailoa got knocked out of the game with broken ribs after attempting just four passes. Brissett took over and completed 24 of 40 passes for 169 yards (4.2 YPA), with 0 TDs, 1 INT, 4 sacks, and a QB rating of 59.3. The Dolphins were shut out 35-0 in that game. Brissett has a career 12-20 record as a starter.

The Dolphins continue to be involved in trade rumors for Houston Texans quarterback Deshaun Watson.