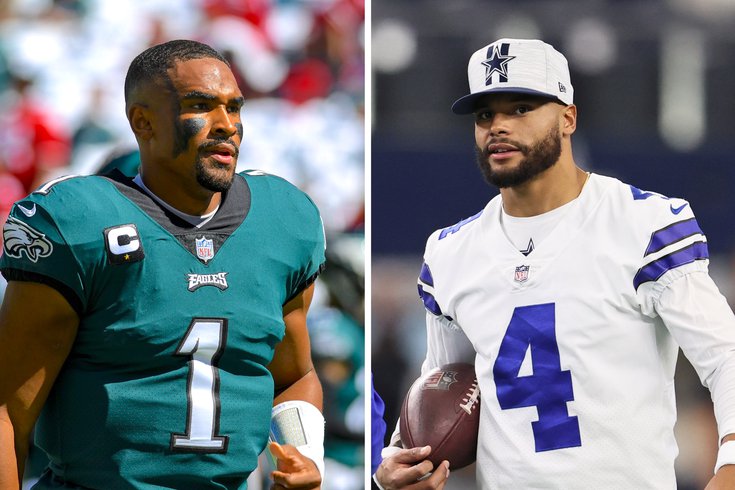 Jalen Hurts and Dak Prescott will go head-to-head for the first time in their NFL careers.

It's been a mixed bag through the first two weeks of the Nick Sirianni Era.

At times, especially against the Falcons, the Eagles looked primed to surprise quite a few prognosticators (myself included) when they routed Atlanta in the opener. A week later, back in front of a home crowd for the first time in forever, the Birds laid the proverbial egg against the 49ers, mustering up just 11 total points and squandering several opportunities along the way. Sure, they showed some flashes in that game, but even with the knowledge that the opponent was much more difficult in the 49ers, it was clear that Week 2 was step in the wrong direction.

Sirianni's playcalling didn't look as crisp, let alone as inspired. Jalen Hurts struggled to complete passes a week after posting one of the highest percentages in the league. And it seemed like a big part of that was the team suddenly deciding to take some shots down field, many of which failed for one reason or another — underthrows, drops, a guy just stepping out of bounds before a would-be TD catch.

At the end of the day, it was a humbling 17-11 home loss for the Birds, one they hopefully didn't spend too much time agonizing over before turning the page to this week's matchup, which is the most important of the season so far for this young team.

For Sirianni, it will be his first taste of the Eagles-Cowboys rivalry, his first division game, and his first primetime matchup as the Eagles head coach. For Hurts, it will also be his first MNF start — although he did start last year's season finale on Sunday Night Football — and it will be a chance for him to get revenge on a Cowboys team that handed him the worst loss of his abbreviated rookie campaign. How do some of their other young players respond under the bright lights of Jerry World? How do they fill the Brandon Graham void? And the Brandon Brooks one, for that matter? And, as of Friday afternoon, the Jordan Mailata void?

We might not have all the answers, but we'll try. Here's a look at our weekly predictions for Dallas Week...

The Eagles have some matchups in their favor in this game, most notably their offensive line against an undersized and undermanned Cowboys defensive line. On paper, it's a significant advantage for the Eagles, and if it's one that they can dominate, they have a great chance of winning this game.

It's the rest of the matchups that are concerning. Can the Eagles' wide receivers be more consistent? Can Jalen Hurts stand out on his own without the need for a new-but-different game plan that avoids exposing his weaknesses like it did in Week 1? Can Brandon Graham's replacement(s) take advantage of a matchup against a backup RT? Can the defense continue to limit big plays, and big numbers on the scoreboard? I'm not certain about any of that.

What I am reasonably sure of is that the Cowboys have a really good offense, and that's probably good enough, for now, to handle an Eagles team that is finding their identity under a new staff, in primetime. It's close, but Dallas has the better team right now.

Having the liberty of editing this story — written well as always by my colleague Matt — I feel the urge to be contrarian. With everyone else (as you'll see) picking Dallas, I could pick up a game in our in-staff standings if I pick the Eagles here. Which I will do.

But I do not pick them blindly, or with the motives of a "homer." Instead, I pick them because I think there was enough good in their loss to the 49ers a week ago to be a little bit confident as the Birds head to Texas this weekend. Their defense was pretty solid and came close to creating a few turnovers. Their offense stalled due to stupid mistakes and due to bad play-calling by Nick Sirianni.

It will be really interesting to see what kind of adjustments the Eagles make after their first loss of the Sirianni era. The Cowboys defense is injured and malleable and keeping up with them will be the key in this one, as the Eagles have the ability to win at both lines of scrimmage. If they can handle the run game, and keep CeeDee Lamb and Amari Cooper in front of them the Birds have a real shot here.

Full disclosure: I have been out sick all week and have been unable to look at, listen to or read anything about this game. Your guess is as good as mine. But still, I'm going to give my reasoning for where I came up with this number. I looked at the odds, saw the point total was 52 and that the most common spread was four. Then I did a little algebra in my head to come up with about as basic a prediction as you'll find. It's essentially exactly how the oddsmakers see this one playing out, and they always seem to know something we don't.

The Cowboys hung tough with the reigning Super Bowl champions in Week 1 and scored a dramatic last-second victory against the Chargers in week two. Is that more or less impressive than Philly’s spanking of the Falcons and botch job against San Francisco? I lean toward more impressive strictly because Atlanta looks ghastly through two weeks of football. It’s hard to read too far into results this early, but it's what we have to work with here.

Betting against Mike McCarthy always feels like a good idea to me, but it’s not like Nick Sirranni is coming into this one flying high. Dallas has the overall talent advantage against Philadelphia, and while there are matchups that favor the Eagles — the offensive line might be able to dominate this game without Brandon Brooks — they’re the team with more question marks right now. There were some worrying signs from Jalen Hurts and the offense last week, namely the misses on deep shots and the inability / unwillingness to attack the intermediate areas of the field, and the defense is going to face a stiff test tracking Dallas’ weapons. Even a potential Cowboys weak spot at right tackle, with La’el Collins out due to suspension, is mitigated by the season-ending injury to Brandon Graham. Philly has two big holes to fill in the trenches, even if you think Landon Dickerson should look better after being  thrown into the fire mid game last week.

I don’t think either of these teams are world beaters. That being the case, I’ll take the home team with a bit more experience in the spots that matter in prime time, as much as it pains me to pick Dallas to win anything.

Reality set in last week and it continues this week. The Eagles proved that they're better than the worst team in the NFL during opening week, and then showed what and who they really are last week against a good team. Nick Sirianni also showed what and who he is against the San Francisco 49ers last week and that's a first-year NFL head coach still learning on the job. Dallas is the best team in the NFC East, which isn't saying much. But they're far better than the Eagles with Dak Prescott. Here's going out on a short limb — Micah Parsons begins his many, many years of many, many Eagles' nightmares to come on Monday night. He's a future Lawrence Taylor in a No. 11 jersey only a little farther south.

MORE: Mailbag: How will the Eagles replace Brandon Graham?

I thought this was going to be a huge week for the Eagles in Dallas but I’m pretty concerned about one major issue. No, it’s no the offensive line or concerns about both Brandons being out, rather bulletin board material that was totally unnecessary. Beat Dallas? Not anymore. Dallas wins the T-Shirt Game

It's the same old Cowboys coming in even with the small sample size: No. 4 in the NFL in offense, piling up 435.0 yards-per-game and 27th in defense, giving almost all of it back (419.5 YPG). The positive from their perspective is that they have been able to add an opportunistic bent to things on the defensive side and are ranked No. 1 in turnover margin at plus-four. The improvement from CB1 Trevon Diggs from Year 1 to Year 2 has been striking and Penn State rookie Micah Parsons has been a blessing for new defensive coordinator Dan Quinn.

With DeMarcus Lawrence out of the lineup for the foreseeable future, Parsons has shifted from playmaking linebacker to edge rusher for Dallas, although he also may be best-suited to mirror Jalen Hurts' running ability in this game.

The Eagles have been tremendous so far limiting explosive plays and this could be their biggest test to date with Dak Prescott throwing to Amari Cooper, albeit a banged-up Cooper, and CeeDee Lamb. The Dallas offensive line remains solid as well despite being without the suspended La'el Collins and the running game has two solid options in Ezekiel Elliott and Tony Pollard.

Many have speculated if the Eagles can win a shootout at this stage of their offensive development and Monday night may be their first chance to prove they can.

Ultimately, you have to lean on the home field and the proven nature of the Cowboys' playmakers vs. the uncertainty of the Eagles'.